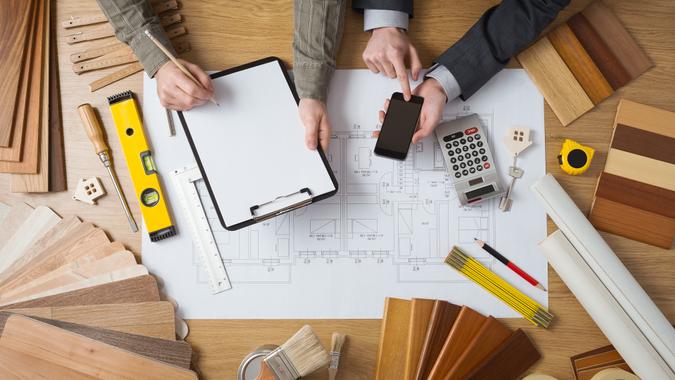 Hey was right. In the nearly 175 years since, tremendous wealth derived from investing in real estate has been passed from generation to generation. But you don’t have to be a millionaire to start your own run as an investor.

Discover: Best Cities To Retire on a Budget of $1,500 a Month
Find: 9 Bills You Should Never Put on Autopay

A modest purchase can turn into a profit — money you can re-invest into another property. Or hold onto the property and let the rental income pay your mortgage payment, with money left over at the end of the month. And sit back and watch your investment grow in value.

GOBankingRates asked investors about some of their favorite investments, and you’d be surprised by how little of an investment some of them made to turn a big profit.

Ryan David, a Pennsylvania property investor, said he was contacted through his website as soon as it launched about a potential purchase.

“We received a lead for a piece of property tied up in an estate over a family member who lived four states away,” David said. “We closed for approximately $15K, which is the price they asked for, and then immediately resold the property to another investor for $55K. There was no work or rehab work done, just a quick as-is resale. To this day, that was the largest spread I’ve ever made on one simple transaction.”

Danielle Wolter of San Diego, who runs the blog The Million Dollar Mama, said she has invested in a variety of properties through the years, but the one that sticks out to her was a house in Memphis, Tenn.

“It was a single-family home that needed to be rehabbed. I purchased it for $76K and paid a contractor $20K, in increments, to do the remodel,” Wolter said. “I had to fire that contractor and hire another one to come in and fix the mistakes of the first for another $20K.

She said she is in the process of selling the Tennessee property, now valued at $210,000.

In and Out in Indianapolis

Alain Perez-Majul is a full-time real estate investor through his company, Virtue Cash Buyers in Indianapolis, and he shared this story of a short-term purchase that turned into a winner. It was a “very old” multi-family property and was so worn it needed to be torn down, he said.

“The owner lived in Chicago and wanted nothing to do with the property as it was a headache for him, and I was able to help him by taking it off his hands,” he said. “I held the property for a couple of months and sold it to another investor at a profit of $80K. Within the month, the property had been demolished and, to this day — I purchased it around four years ago — it is still just an empty lot. I believe the investor is waiting for the area to turn a bit more before building on it.”

Benjamin Dixon, a licensed associate real estate broker with The Mackay Dixon Team at Douglas Elliman in New York City, was working with a client to find an investment property. He employed this strategy: Look for “the dirtiest house possible in the best location.”

“Many buyers do not have the imagination to look past filthy windows and walls that need to be painted or floors that need to be refinished,” Dixon said. “I recently found an amazing property in Bridgehampton for a client. We purchased the very tired 1970s home for $2.8 million and did a $1 million renovation to refresh the home. It is now in contract for sale at $6 million, and I have a very happy seller.”

For Tomas Satas, one of his best deals fell into his lap when a cousin called and said his neighbor wanted to sell his property. Satas, the founder and CEO at Windy City HomeBuyer, met with the seller, a gentleman who wanted an easy transaction without real estate agents, buyers and inspectors walking through his longtime home.

“I examined the house, and it had some major issues. Wouldn’t have passed inspection,” Satas said. “I talked to him about this and asked how much he wanted for it. Almost fell over when he told me. (I) asked how he arrived at that number, and it was double what he had paid.

“The man was still operating on 1980s prices. I explained to him that he could make more money if he got it appraised; but, if he wanted, I’d write him a check on the spot. He kept his simple life simple, took the check, I fixed the foundation and some other problems, and percentage-wise, had the (biggest) margin of any flip I’ve ever done.

“The best property I ever bought was on a handshake deal. I learned that he was an avid woodworker, so I mailed him a very large amount on a home improvement store card to thank him.”

For Alyssa Carpenter, it took patience to find a seller willing to accept FHA financing in Austin, Texas, as she looked for her first home: a duplex that doubled as an investment property.

“I was able to secure this property with 3.5% down at a 2.5% interest rate,” said Carpenter, who runs the financial-based website FI/RE Manual. “After a short renovation, I was able to raise rent from $700 for a two-bedroom, one-bathroom to $1,400 for the same unit. The tenant just renewed the lease for a second year. I just moved out of the other side (three-bedroom, two-bathroom) and have leased it for $1,900.”

She continued: “Being able to purchase a duplex as an investment property with so little down has been incredibly impactful. Rents large $700 a month over the mortgage. This property has also appreciated from the $390,000 purchase price. I received a soft offer from another investor at a purchase price of $515,000. I’m not selling yet, but it’s amazing to see that appreciation in just a few years.”

Real estate investors shared their advice for those interested in investing in residential properties themselves. It begins with networking and marketing yourself as an investor so potential sellers know they can turn to you.

“Let anyone know … you’re a real estate investor and looking to purchase property,” said Antonio Cousin, the broker/owner of Service 1st Real Estate in Louisiana. “You never know who you may come across that may need to sell and can help you out. It’s also a good idea to join your local real estate investors association and network within the group. Networking within could lead to additional opportunities or even a partnership.”

To one seasoned investor, there’s no substitute for knocking on doors.

“In the industry, this is called driving for dollars, where you drive through a desired location and knock on … doors with an offer,” said Craig Stevens, the founder of Groundbreaking Real Estate in the metro New York area. “This technique allows an investor to avoid any bidding wars and can help develop a rapport with an owner since the negotiation occurs face to face. Since the property is not actually on the market, some owners may be surprised at how much their current property is worth and be enticed at the potential to sell so quickly.”

Jami Farkas holds a communications degree from California State University, Fullerton, and has worked as a reporter or editor at daily newspapers in all four corners of the United States. She brings to GOBankingRates experience as a sports editor, business editor, religion editor, digital editor — and more. With a passion for real estate, she passed the real estate licensing exam in her state and is still weighing whether to take the plunge into selling homes — or just writing about selling homes.

How Can Digital Marketing Help In My Real Estate Job?