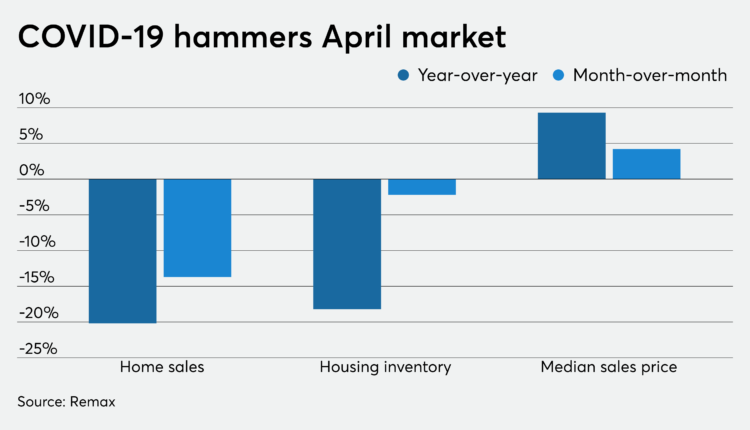 April home sales tanked — but not as badly as predicted: Remax

With the effects of the coronavirus in full swing, annual home sales took a nosedive in April, according to Remax. The numbers marked the end of four months of sales growth.

Completed transactions were down 20.2% from April 2019 and 13.7% from March 2020. As a rule, there is a clear jump in activity in April, which lasts into the summer months. Only two of the 53 metropolitan areas surveyed saw annual sales increases: Billings, Mont., Grew 9.9% and Minneapolis grew 3.6%. Detroit, Miami, New York, and San Francisco saw a decline of over 40%.

Despite a sharp drop during what is usually the fifth best month for home sales, April 2020 wasn’t as bleak as expected given the pandemic that paralyzed the country.

“April results were better than many expected as consumers continued to buy and sell properties during one of the toughest months for real estate to remember,” said Adam Contos, CEO of Remax, in a press release. “This was a headwind like no other – yet we saw activity across the country. Even in markets where sales were down 40%, people wanted or had to move, which says something about the resilience and power of home ownership. “

April housing supply fell 18.2% year-on-year and 2.2% month-on-month. However, due to the suppressed sales rate in April, the inventory increased to 3.5 months, compared with 3 months in the previous year and 2.9 months in March. A delivery of 6 months defines the market equilibrium. The average market days in April were 46 days, compared to 53 in the previous year and 54 in March.

“We believe the coronavirus and the measures to slow it down have pushed back the spring sales season somewhat,” said Contos. “However, we believe buyer demand will remain relatively high despite the pandemic, and sellers who stopped selling in March or April will hopefully be back in the market this summer. Others may start the process after getting into one Stuck in a house that no longer suits them. ” “”

RESAAS: An under-the-radar technology firm with global ops and partnerships