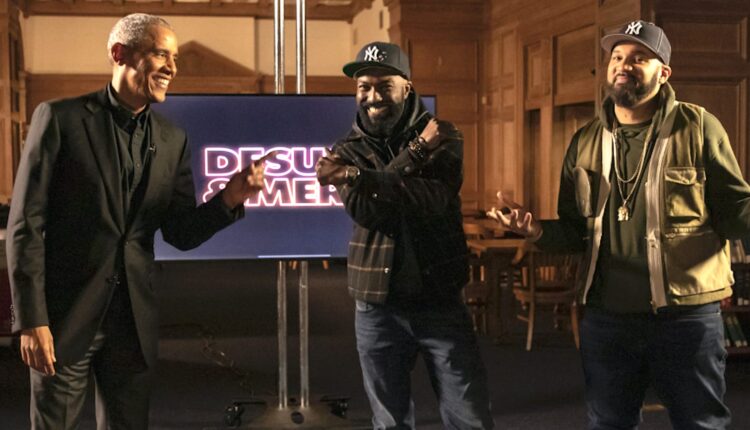 As Desus Nice and The Kid Mero waited for Barack Obama to come for an interview at Howard University’s Founding Library, they wondered if the former president would actually show it.

“Do you remember when Clint Eastwood did the whole empty chair interview?” Desus asked Mero. “Are we doing that?”

But moments later, Obama strolled into the room and bowed to the two hosts of Showtime’s Desus and Mero in lieu of handshakes, before embarking on what was seemingly the most pleasant interview of the book tour for his bestselling memoir, A Promised Land.

The former president initially joked that he would wear his “kicks” or his Timberlands, but instead opted for an all-black suit and shirt look. When Mero added that he thought they were going to “mature,” Obama said, “Let me just say that I’ve seen some footage of you [Cory] Booker. “Desus cut him off to call the video ‘Deep Fake’ and ‘Fake News’ and turned Obama on his head. Then he added,’ Here’s the good news, it looks like all of you can for that Play curtsey. “

That more or less set the tone for the remainder of the 30-minute episode in which Obama showed more than a little knowledge of the couple’s rise to fame on their Bodega Boys podcast, before making the jump on television at Vice and now Showtime made. Obama shared stories of his own experiences while shopping in bodegas during various “funky life situations” in New York in the early 80s.

It was the hosts who had to get him to talk about his new book, which focuses not on those early days but on his campaign for the presidency and first term. “You know, the big scandal for me was the time I was wearing the brown suit that I thought was pretty sharp,” Obama remarked at one point. “I wore it to church just like that spring.”

Taking the opportunity to toast Obama, Mero said he looks like “the sickest Remax real estate salesman in Carbondale, Michigan right now.” In contrast, Desus seemed more interested in finding out what that moment felt like for Obama, and asked, “If you turn that little molehill into a mountain, what is it like to be on the other side of it and just that to live? ”

“I’m being honest with you, there was so much stupidity going on at this point that you wouldn’t be obsessed with it compared to what?” Obama replied. “Compared to a man who became president and said I wasn’t born in America?”

That was about as much airtime as each of them was willing to give the current president instead of opting to quickly move on to basketball for the final third of the interview. This included dismantling the tape of Obama’s game over the years, which peaked with the three he dumped during a Biden campaign event in the final days leading up to the 2020 election.

After seeing him lower his mask to scream, “I’ll do that!” Obama admonished himself in the press. “I had to repeat it because I wasn’t sure people would hear,” he said.

For more information, see The Last Laugh about Desus and Mero podcast.