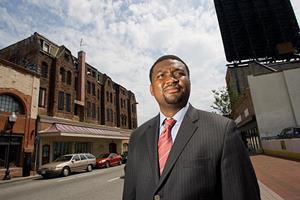 Real estate developer Ernst Valery, who focuses on low-income and underserved minorities, has built residential and commercial real estate projects nationwide, including in Maryland, Washington, DC, Pennsylvania, Virginia, California and New York. He filed a class action lawsuit against Wells Fargo after the bank refused to deposit his $ 3 million check from the state of Maryland.

MIAMI, BALTIMORE, and SAN FRANCISCO, Dec. 15, 2020 (GLOBE NEWSWIRE) – Miami litigators Beck and Lee announced today that they are representing black Baltimore real estate developer Ernst Valery in a class action lawsuit against Wells Fargo after the bank declined to deposit his $ 3 million check. Lawyers said the complaint and request for a lawsuit were filed in the U.S. District Court in Northern California and they are trying to represent anyone else with similar claims against the National Bank (Case Number 3: 20-cv-08874, Valery v. Wells Fargo & Company et al.). A virtual press conference is scheduled for Wednesday, December 16, 2020 at 1 p.m. EST.

“Mr. Valery’s experience is just one more in a remarkable series of shameful incidents that have occurred in Wells Fargo branches in recent years and is overwhelming evidence of systematic racism emanating from this banking institution,” Beck said. In one The June 2020 New York Times article describes four recent examples of banking while black, three of which occurred in Wells Fargo bank branches: (1) In December 2018, Claire Middleton attempted a $ 200 check in a Wells Fargo -Branch in Atlanta, where bank employees immediately accused them of fraud and called the police; (2) In March 2019, Jabari Bennett attempted to use it to withdraw $ 6,400 from his Wells Fargo account, which contained approximately $ 70,000 could buy a used car, but the Wilmington, Delaware office declined to accept that he was the account holder and threatened to call the police en if he insisted on completing the transaction; and (3) In April 2019, attorney Benndrick Watson, manager of a Wells Fargo office in Tampa, Florida, uttered the “N-word” while attempting to open a business account for his law firm. “

In the most recent case, Valery, who immigrated to the US from Haiti at the age of eight, is a well-known real estate developer focusing on low-income and underserved minority communities who has built residential and commercial real estate projects across the country including Maryland, Washington, DC , Pennsylvania, Virginia, California and New York. The Baltimore Business Journal featured Valery’s impressive career in May 2019: https://www.bizjournals.com/baltimore/news/2019/05/23/podcast-developer-ernst-valery-on-investing-in.html

On October 9, 2020, Valery and his wife visited the Wells Fargo store at 5701 Reisterstown Road in Baltimore, the store closest to their home, according to legal proceedings. Valery had Mr. and Mrs. Valery written a check from the state of Maryland for $ 3 million to be deposited into their joint account. It was a payment related to a historic Maryland state tax credit for a development project Valery recently launched to convert an abandoned church in Baltimore into a brewery and affordable housing (https: //www.baltimoresun .com /). opinion / columnists / dan-rodricks / bs-md-rodricks-0605-story.html).

The complaint stated that when Valery presented the check for deposit, he was a customer of over 20 years old with multiple accounts under his name with Wells Fargo.

“But instead of simply depositing the check and thanking Mr. Valery for his continued patronage of Wells Fargo, the bank manager showed up and locked him in front of his wife with a series of questions that challenged his eligibility for the funds and his knowledge of them , what the funds were for, and then the manager suggested in the affirmative that he wasn’t the type of person who could have such a high income, ”Beck said. “Even after Mr Valery tried calmly and professionally to explain the source of the check and the type of tax credit (none of which he had to reveal to the banker, but he did so to calm the situation and ease the transaction), the transaction refused Wells Fargo manager accepted Mr. Valery’s request to put the money into the joint account. “

“It is a shameful remnant of an era in American history when blacks were viewed as property rather than persons with the right to property,” added Beck. “It is time to put an end to this once and for all.”

Press representatives can take part in the media conference via Zoom:

A photo accompanying this announcement is available at https://www.globenewswire.com/NewsRoom/AttachmentNg/cccb9b3a-d810-4552-9022-2d0eab337eb1

The Rockland Real Estate Deal: Paul Adler Gets Instructive On The Ins & Outs Of…