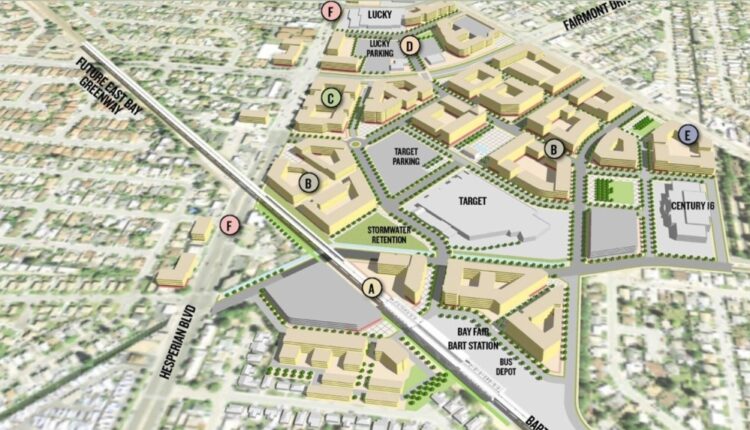 SAN LEANDRO — Several chunks of a big shopping mall in the East Bay have been bought by a real estate group that is also involved in the revamp of another commercial complex in Alameda County.

Large sections of Bayfair Center, a longtime San Leandro shopping mall, have been bought by a group that’s linked to two East Bay real estate executives — Peter Lennon and Adam Goldenberg, according to documents filed on June 14 with the Alameda County Recorder’s Office.

The investment firm, acting through an affiliate, paid about $57 million for portions of Bayfair Center, which is located at 15555 E. 14th St. in San Leandro.

The sites that San Leandro JV, the affiliate headed up by Lennon and Goldberg, bought include several high-profile retailers as tenants.

The site of a Target store wasn’t involved in the purchase. Target owns its store property at Bayfair Center, according to documents posted with the County Assessor’s Office.

San Leandro JV also obtained a loan of $28.5 million from Loan Oak Fund at the time of the purchase, according to the property records.

B3 Properties, a group led by Lennon, is also involved in a revival of West Gate Shopping Center at 1933 Davis St. in San Leandro.

West Gate in San Leandro is a former two-story automotive manufacturing center with bigger retailers such as Home Depot, Ross Dress for Less and Dollar Tree.

The upper floor of West Gate has been converted into numerous spaces for tech startups, creative artists and small industrial companies.

At Bayfair Center in San Leandro, the sites that were purchased could be replaced and redeveloped, documents on file with city officials show.

San Leandro is actively studying whether it makes sense to transform part of Bayfair Center into a mixed-use complex that might feature homes, ground-floor retail, offices plazas and open spaces.

“A vibrant mixed-use, transit-oriented retail, commercial and residential destination” could sprout at the current site of Bayfair Center,” a city document states.

No specific plans have emerged for a redevelopment of the mall. Plus, no timeline has been proposed for any specific development work. The plans that have been considered by the city are early-stage efforts and conceptual in nature.

Bayfair Center opened in 1957 with the launch of the Macy’s store as the primary anchor at that time. In recent years, Bayfair has become more of a power retail center — with multiple big-box tenants — rather than a traditional indoor mall.

Now, further changes appear to be in the offing as San Leandro mulls the future of the mall and other areas near the local BART station.

Senate Deal Raises Hopes for a Reduction in Gun Suicides