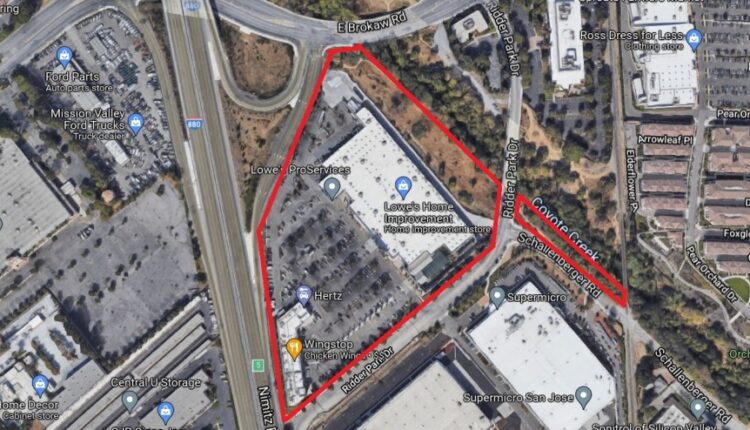 SAN JOSE – A large property in northern San Jose that includes a Lowe hardware store is now fully controlled by a developer who has been cited as innovative due to his penchant for unusual redevelopment projects.

In separate property purchases this year, most recently a few days ago, an Orton Development subsidiary purchased approximately 13.3 acres near Interstate 880 and Brokaw Road, documents filed with the Santa Clara County Recorder’s Office.

Emeryville-based Orton now owns all of the land under a Lowe’s hardware store and adjoining retail buildings on land near Ridder Park Drive, according to county records.

All in all, Orton Development paid $ 55.6 million for the properties, including transactions in May and November of that year, the county documents show.

When purchased in May 2021, Orton’s subsidiary paid 775 Ridder Park Drive $ 41.8 million for the land under the Lowe property. On November 16, Orton subsidiary Lake Natoma Associates paid $ 13.8 million for some smaller lots, including a retail building that now tenants DaVita Silicon Valley Dialysis.

The seller for the transaction a few days ago was Peter Pau, a high-caliber developer from the Bay Area. David Taxin, partner at Meacham / Oppenheimer, a commercial real estate company, arranged the latest transaction.

“Orton is very innovative and they think ahead with their projects,” said Taxin. “Orton has developed some very interesting projects.”

Among the top-class redevelopment locations in the Bay Area that Orton owns:

– Ford Point in Richmond. Ford Point, a former Ford motor vehicle assembly plant, is rented almost entirely to tenants such as SunPower, Columbia Sportswear, and Ekso Bionics, and has a restaurant with scenic views of the bay.

– Oakland Civic in Oakland. The historic site of the former Oakland Auditorium and Calvin Simmons Theater is being redeveloped. It will be converted into commercial space as well as office, practice and performance rooms for local artists, makers and performers.

– Flint Ink at Berkeley. The property, a former ink factory, has been remodeled and now has tenants including two wineries, a solar power company, and a printing facility.

– Contra Costa Industrial Park in Pittsburg. The complex, a former US steel foundry, is now a multi-purpose industrial center where BART and SF Muni manufacture and repair railroad cars.

“Orton made an accomplished property purchase in Ridder Park,” said Bob Staedler, general manager of Silicon Valley Synergy, a land use consultancy. “The interest in strategically located locations in North San Jose has continued over the years.”

The property may not be redeveloped immediately as the main tenant – Lowe’s – previously received a long lease for several years, according to Taxin. However, in the next few years the property could become a prime redevelopment area, Taxin said.

“In theory, redevelopment could take place in the next few years, depending on what happens to Lowe’s lease,” said Taxin.

Matthew Iovane: The Perks of Real Estate Investing with Bloc…