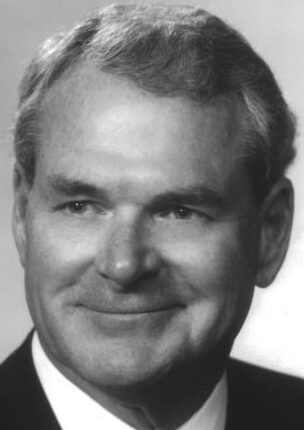 Robert M. Stanton, a former rector of Old Dominion University’s Board of Visitors, a founding member and the first chair of the University’s Real Estate Foundation board, and one of Hampton Roads’ most prominent real estate developers, died on Sept. 4. He what 84.

“Bob Stanton was a very dynamic rector,” said Dick Barry, who succeeded Stanton as rector. “He loved ODU and was proud he graduated from the University.”

That pride was on display – via his “ODU 61” license plates – every time he drove around the area.

“He had a great sense of humor, frequently commenting that he crammed a four-year college career into a five-year experience,” Barry added.

Stanton, who graduated with a degree in business administration from the Norfolk Division of the College of William & Mary in 1961, also made what was at the time the largest planned gift of any alumnus, $1.5 million, to establish the Robert M. Stanton Chaired Professorship in Real Estate and Economic Development (CREED) in 2004. That professorship is now in the EV Williams School of Real Estate.

“I cannot overstate the importance of this gift,” Nancy Bagranoff, then dean of the College of Business and Public Administration, said at the time. “Bob Stanton has had a wonderful relationship with the University, and the funding for CREED ties with the college’s mission to support economic development.”

“I hope that this record remains standing no longer than 15 minutes,” said Stanton, who as one of the earliest members of the University’s Educational Foundation board helped to increase the organization’s endowment value to $115 million at the time.

He oversaw some of the region’s most significant real estate developments, including Lynnhaven Mall, Greenbrier Mall, the World Trade Center, Riverside Corporate Center, Harbor View and more than 30 retail centers.

His online obituary noted that he “was an unwavering champion of women in the workplace, and diversity was always a priority.” Stanton Partners President Teresa Peters told The Virginian-Pilot that several years ago, 50 women organized a luncheon in his honor.

“A lot of people in our community went on to continue their careers in commercial real estate, start their own companies or they are in top leadership roles, and we all attribute that to Bob for what he taught us,” Peters said.

He is survived by his wife of 41 years, Eleanor; his daughter, Allison McDuffie, her husband Duff, and their children, Meredith and Stanton; stepchildren Jim Vail, his wife, Mahala, and their son, Daniel; Charles Vail and his significant other, Courtney Chalmers; and Mary Vail and her children, Jack and Eleanor; and cousins ​​Anna Wright and Kristen Taylor.

A memorial service will be held at Christ & St Luke’s Episcopal Church in Norfolk at 1 pm Sept 21. A reception will follow at Norfolk Yacht & Country Club.

Why you should invest in real estate | Lifestyle