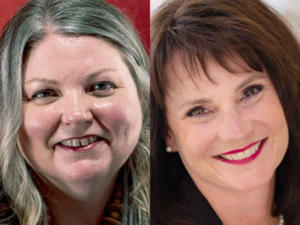 The real estate industry and Democratic politicians are pouring money into the Albuquerque City Council runoff, helping the four candidates who are still in the running to raise nearly $ 180,000 in a month.

Heading into the last week of the campaign, District 7 hopefuls find themselves in financial manslaughter, Tammy Fiebelkorn, a Democrat, and Lori Robertson, a Republican. Each raised around $ 44,000 total during the settlement cycle and has a current balance of nearly $ 33,000, according to financial reports filed with the city.

In the runoff of District 9, Democrat Rob Grilley has a financial advantage over his Republican opponent Renee Grout. Grilley, who outperformed Grout by about 14%, still has nearly $ 33,000 on hand, compared to her $ 25,265, records show.

Next Tuesday’s runoff election will settle the two remaining council competitions and, although the races are technically impartial, set the political balance of the city’s nine-member legislature. The winners will join four Democrats and three Republicans.

Robertson, a real estate agent, has raised money in the real estate and construction industries. Her top donors – each donating $ 1,499 – include Clay Azar of Metro Commercial Realty, Deborah Harms of Sun Vista Commercial Real Estate, Dale Armstrong of TLC Plumbing, and the commercial real estate development association NAIOP New Mexico. She has also received large donations from the oil industry, including $ 1,400 from Harvey Yates and another $ 1,400 from Jalapeño Corp. Grout has received support from similar donors, including $ 1,499 each from NAIOP and Armstrong and $ 1,400 from Jalapeño Corp. She also reported $ 1,499 each from The Auto Clinic (her family’s auto repair shop), James Grout, and Jeree Hindi Tomasi.

Jim Collie, a former Democratic member of the Bernalillo County Commission, also gave $ 1,000 each. Other donors made by the two Democratic council candidates include businesspeople Paul Blanchard, Steven Chavez, and Charles Fresquez, who each donated $ 1,499 to Fiebelkorn and Grilley.

There are also several political action committees that raise and spend funds in the council’s runoff elections, reports show:

n Healthy Economies Lead to Progress – Propelled by Real Estate Money – work to vote Robertson and Grout. It raised $ 42,200 during the runoff and has $ 60,212 left due to carryovers from the regular elections.

n ABQ Workers First, a union-backed PAC that supports Fiebelkorn and Grilley, raised $ 62,500 during the runoff and still has $ 10,034 available.

n The New Mexico Democratic Party’s PAC, which also supports Fiebelkorn and Grilley, has raised $ 25,360 and has a current balance of $ 10,137.

Your guide to Decentraland, the digital real estate to invest in now