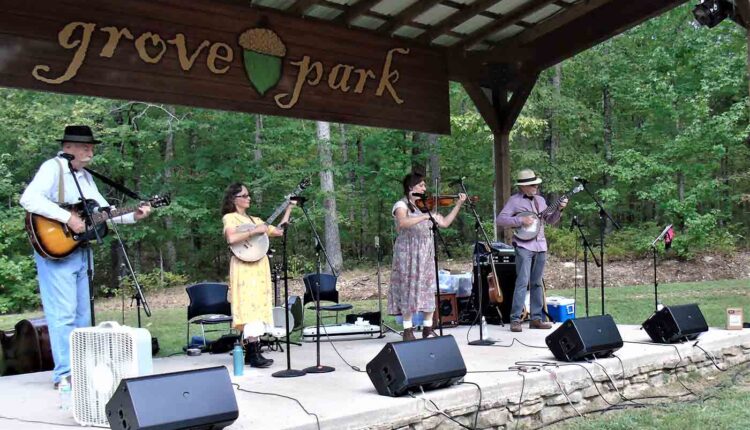 The first annual Arkansas Heritage Festival was held on Friday, August 27th by Arkansas Lt. Governor Tim Griffin opened and the two-day celebrations ended on Saturday, August 28th. The Lifelong Learning Institute of Hot Springs Village was proud to host this opening event under the auspices of the HSV-POA. The events were free to enter, with the exception of the closing concert, which featured country recording artist Gill Grand and his homage to historic Arkansas artists Johnny Cash, Glen Campbell, and Conway Twitty.

The festival showcased unique Arkansas arts, music, and crafts along with faculty who were authorities on Arkansas history in the Woodlands Auditorium. The Ponce de Leon Performing Arts Center also welcomed many Arkansas musicians and dancers to perform in Grove Park. A short film festival was held in the park. Vendors and food were in abundance all over the area.

“We are very excited to be hosting this first event because it is all about what Arkansas is all about,” said LLI Director Larry Wilson. Wilson is a retired history teacher in Arkansas. He thanked for the hard work of volunteers on his committee including Terry Wiley, HSV Parkas and Recreation Manger, Amy Thomason, Susan McCarty, Melanie Pedersen, Nancy Hendricks, David Childs, John O’Brien and Alice Canham.

A special attraction were many works of art by Arkansan Xu Longhua in the Woodlands lobby.

Arkansas themed entertainment and history were shared at the Woodlands Auditorium, Oak Park Stage, and a special outdoor tent center.

The providers in the Porte clique included political associations, sponsors and charities.

A highlight of the festival was an award given to the person who best embodies efforts to highlight and support Arkansas culture. The recipient of the first annual Arkansas Heritage Festival Award was Rex Nelson, one of the state’s most distinguished writers and public speakers.

The award was presented by Jimmy Bryant, Director of the Department of Arkansas Heritage. Bryant invited the audience at Woodlands Auditorium to honor Nelson for his longstanding work in highlighting the rich cultural diversity of Arkansas with his talent, humor and love for our state.

Special thanks go to the Arkansas Department of Heritage for working with the committee to create this first project. Supporting sponsors were Allen Tillery Chevrolet, Faces Foundation Dr. Daron Praetzel, Middleton Heat and Air, Century 21 Real Estate and Arvest Bank.

Holly Hope provided information about state headstones and their use in Arkansas cemeteries.

Janis Kearney described her Arkansas Journey from transitioning from a tenant family to the Diary of the President of the White House.

Brian Robertson, Guy, and Anna Lancaster discussed their little-known library as an authoritative source of information on Arkansas history and culture.

In addition to being a well-known lawyer, Terry Diggs shared his musical singing and guitar, as well as his interest in folk music and stories.

Rex Nelson, executive editor of the Arkansas Democrat Gazette, presented the history of the state through a series of natural and man-made disasters.

David Hill, author of The Vapors: A Southern Family, the New York Mob, and the Rise and Fall of Hot Springs, Americas’ Forgotten Capital of Vice, spoke about details that he discovered while writing his novel, and stood ready to give autographs.

Liz Robbins, executive director of the Garland County Historical Society since 2007, explained how and why Hot Springs drew tourists to Arkansas from the stagecoach era to the jet era.

Woodlands also featured two unique videos, including the Arkansas PBS award-winning documentary about Little Rock’s historic West 9th Street and “Video Fest,” which features interviews with notable Arkansans, including Elizabeth Eckford (one of the Little Rock Nines) and Orval Allbritton , Author of “The Mob at the Spa.”