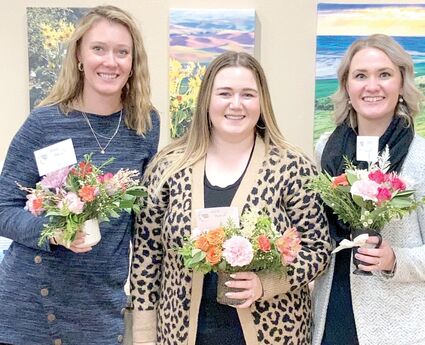 Molly Keogh | Especially for the Gazette

Jayci Cocking (from left), Alexis Ryan and Toni Jorgensen were elected 2022 Chamber of Commerce Representatives for Colfax on January 11.

COLFAX – The Colfax Chamber of Commerce has voted its leadership for the coming year.

The new officers were selected during a January 11 meeting at which 10 members were present to vote.

Jorgensen is a longtime Chamber volunteer; She works in the pharmacy at Tik Klock Drugs.

“The Chamber is being revitalized and these energetic girls will be reassessing how the Chamber will evolve, always with the best interests of our members in mind,” said Chamber Director Molly Keogh.

With the new leadership comes at least one change – chamber members will meet quarterly to try to increase participation.

There are positions to be filled on the board of directors; Interested people can email Keogh at [email protected]