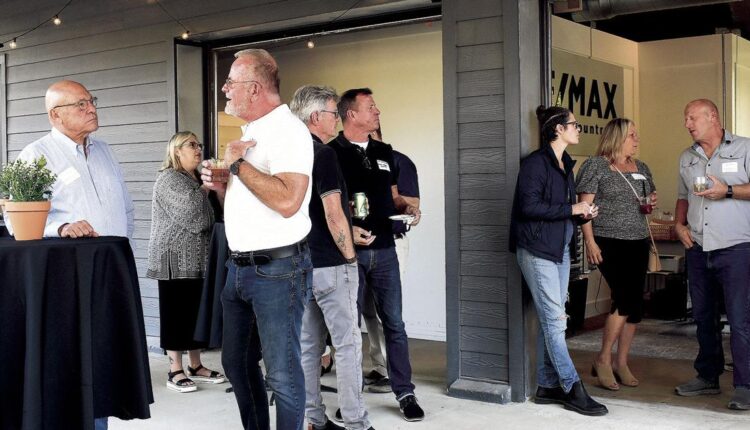 Remax Harbor Country moved into its new office at 5888 Sawyer Road in the fall of 2021.

Broker Owner Daniel Coffey celebrated “the people who work with me for their contributions to this community for many years.”

He said Maureen Culp has been contributing to Chikaming Open Lands for many years, has been working with the Michiana Humane Society “practically since it started,” and helped make a party at Fernwood possible.

Coffey said John Natsis and Tom Hemingway have been members of the Chamber Board over they years and “have put an immense amount of money and effort into the Humane Society Grand Cottage events over the years.”

He said George Lucas is a past president of Chikaming Country Club, Chikaming Open Lands and the Southwestern Michigan Association of Realtors and now a member of the State Board of Realtors.

“He just completed a run for the Michigan House or Representatives. There were 8,324 cast on the Republican side … He lost by 189. He visited 20,000 people!”

Coffey said Ken Kemp just joined the office and has been involved in supporting equestrian clubs at the county fair.

He said Traci Lauricella, who runs the Re/Max New Buffalo office, is his heir apparent.

Coffey said he was “in the room when the people decided to call this area Harbor Country.”

“I immediately went out and got the name Re/Max Harbor Country,” he said.

Coffey also told Dee Batchelder how much he enjoyed her putting up with him on the Planning Commission for 16 years.

He thanked everyone for coming to hang out at “our bar and food truck thing.”

SideYard, which opened earlier this summer, offers a unique dining experience featuring an outdoor patio with games like foosball and ping pong, a permanent Fresh to Death food truck on its grounds, fire pits, and an indoor space with a bar.

“I’m super-excited to be a part of the Harbor Country Chamber of Commerce and with all of you guys out here today,” Mammina said.

Chamber Executive Director Kimberlee Wendt said many events are planned over the next year.

She said the Chamber’s Annual Dinner will take place from 5:30 to 8 pm Oct. 26 at the Village of Grand Beach Hall featuring a dinner buffet catered by Skip’s Restaurant and a cash bar.

The next Chamber Mixer is set for Nov. 10 Chateau Sullivan in Sawyer.

Brianne Schmidke of Properti Home Concierge said she and her husband (Joshua Schmidke of Schmidke Construction) began clearing a nearby five-acre property for their new office space and shop.

Pension Funds Are Loading Up On Commercial Real Estate