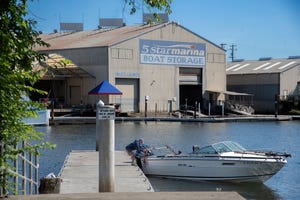 City faces zoning challenge to shift from industrial to commercial

Glenn Miller, 79, is ready to retire after 50 years of work and years of service in the United States Marine Corps. He’s owned a warehouse in Stockton near the El Dorado and Center Street overpass for 22 years where he’s sold spices to the restaurant industry.

With restaurants getting hit hard over the past two years of pandemic, Miller said he’s lost three quarters of his business and has used his own money to continue to employ people in the neighborhood.

Download the app: Get the latest news, sports and more

Miller’s warehouse at 823 S. Center St. is his retirement plan. However, he said he believes the city’s plan to change the area from industrial zoning to commercial has jeopardized his ability to sell the land and retire.

Talk of zoning ordinances may make the average citizen’s eyes gloss over, but blight, property value loss, vacancies and the economic well-being of the city are all on the line when shifting the rules of what can go where in Stockton.

For the past two years, the city of Stockton has been engaged in efforts to align its zoning ordinances with the city’s general plan, Envision Stockton 2040. A city’s general plan is a broad vision, and zoning ordinances are some of the tools used to implement that vision. In 2018, the same year Envision Stockton 2040 was adopted, new state law required that the city’s zoning be consistent with its general plan. As a charter city, Stockton did not previously have that requirement.

Mike McDowell, Stockton’s deputy director of community development, said the process is not foreign to the city, more so that the new California law puts Stockton’s eligibility for state and federal funding at risk until the process is completed.

McDowell said the vision of the general plan primarily in south Stockton is to transition away from noxious industry sitting next to residential homes by rezoning from industrial to commercial. The city is currently in phase three, which affects 2,144 properties. Some of the phase three changes include transitioning to commercial at the edges of the downtown core, shifting Liberty Square to medium density residential and transitioning centrally located industrial to commercial.

“Our commercial (zoning) actually allows for residential and more commercial-type retail, but not the manufacturing aspect,” McDowell said. “We’re trying to create a transitional zoning for that area, which is called a commercial-industrial overlay district.”

Miller’s warehouse falls under centrally located industrial, where he’s seen four dead bodies in 22 years, one just recently 100 feet from his gate. He said some of the violence he sees underneath the freeway is reminiscent of his time in Vietnam with the Marines.

“It backs up to the railroad and is surrounded by the homeless, dope dealers and dope users,” Miller told the Stockton City Council April 5. “It’s not a place for a commercial building, it’s a place for a light-industrial building. ”

If the new zoning plan is adopted, Miller’s warehouse would fall within the proposed overlay district, which would enable businesses to continue some industrial uses while the city attempts to incentivize them to go commercial. A legal nonconforming policy would give property owners six months — up to 12 months with an extension — to fill a vacancy with the same previously-zoned use before having to comply with the new commercial zoning.

Russ Moroz, first vice president of investments at Marcus and Millichap Commercial Real Estate, the largest commercial real estate brokerage firm in the nation, said his firm represents 250,000-square-feet of space — including the Five Star Marina building visible from Interstate 5 — in the area affected by the proposed changes. He said his firm and the property owners they represent would love to see the area transition into a vibrant, commercial, mixed-use area. It’s the path to get there that concerns him.

“Our concern is, by not expanding the types of uses that are allowed in addition to industrial-type uses to allow for multi-family and other mixed-uses,” Moroz said at the April 5 Stockton City Council meeting, “but by restricting the already successful businesses operating there, what you’re going to create is a condition of economic obsolescence, vacancy and frankly blight until such a time where someone can come in and completely redevelop properties there, which we would love to see.”

“We’re not trying to put people out of business and we don’t want to blight out there,” McDowell told The Record. “I think they are struggling a bit with the fact that [commercial] is not really here today, so therefore we want to continue doing what we want to do. The code allows for legal nonconforming uses … you can’t just change the game on them and say, ‘you’ve got to close your doors and discontinue what you’re doing.’”

The city council tabled the April 5 zoning item for 30 days and recommended extending the legally nonconforming timeline to 12 and 18 months. McDowell said he doesn’t expect to go back before council until July and that the city will host another community workshop on zoning before the changes are brought back to the council.

Record reporter Ben Irwin covers Stockton and San Joaquin County government. He can be reached at [email protected] or on Twitter @B1rwin. Support local news, subscribe to The Stockton Record at recordnet.com/subscribenow.