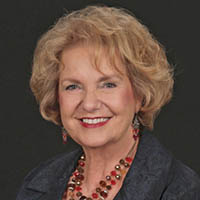 Pat is survived by their children, Deborah Hildebrand of Malibu, California, Russ Collins of Radford, Virginia, and April Salvant (Scott) of Mechanicsville, Virginia. the joys of her life, her seven grandchildren: Jen Cross (Ian), David Hildebrand, Jadon Salvant, Jeff Salvant, Caroline Salvant, Dave Salvant, McKenna Salvant and two great-grandchildren: Sophia Cross and Lillian Quesenberry. She is also survived by her sister Jean Akers Cox (Jim) of Pulaski, Virginia, her uncles EG Black Jr. of Pulaski, and Zack Black (Carol Sue) of Bedford, Virginia. and her aunt, Jewel Shufflebarger from Pulaski; as well as many esteemed nieces, nephews and cousins. She is also survived by many valued friends and a special companion, Patrick Owens. Her parents, Earl and Isabel Akers of Pulaski, Virginia, precede her death.

Pat was born in Pulaski, Virginia during World War II and grew up on the mountain. Olivet. She graduated from Pulaski High School in 1962 and later pursued her real estate license in 1975 and moved to Radford, Virginia to raise her children. In the 1980s, Pat started her own real estate agency, Ingleside Properties, one of the first women-owned companies of its kind in Radford. She later owned and operated two other brokerage businesses: ReMax Gallery in Blacksburg and River Pointe Properties in Radford. She was president of the New River Valley Association of Realtors and has served many real estate agents during her 40+ years in the real estate industry. She recently retired in late 2020.

In addition to helping many families find homes through her real estate practice, Pat served their community through her church, Central United Methodist Church, and was a member of the Pathfinders Sunday School Class for decades. She served in the choir, youth ministry, local and overseas missions, and entertained many at the annual talent shows.

Pat was known by everyone for her infectious smile, magnetic personality, wild sense of humor, and compassionate heart. She loved singing, dancing, cooking, playing the piano, gardening, and having dinner with family and friends. She was a Scrabble enthusiast and took part in national tournaments several times. Pat loved the outdoors and would enjoy watching the birds in her garden, especially her favorites, the cardinals.

The family would like to thank them for the support they received. Due to the COVID19 pandemic, a memorial and celebration of life will be held in Radford, Virginia at a later date. In lieu of flowers, a donation may be made to the Lewis Ginter Botanical Garden, 1800 Lakeside Avenue, Richmond, VA 23228.