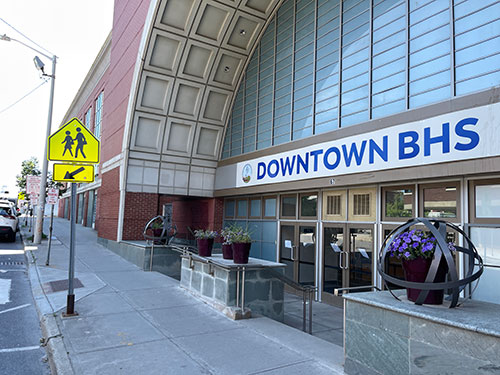 Photo: The old LL Bean location, at left, keeps watch over the empty space that will be Phase 1 of the new CityPlace. VermontBiz photo.

by Timothy McQuiston, Vermont Business Magazine Real estate is in a state of flux, evolution, turmoil.

Brick-and-mortar retail has been in decline since the dawn of the internet, even as retail sales from all platforms have boomed. This has left empty storefronts on Main Street and mannequins gazing into nothing at shopping malls.

Restaurants would be thriving, by all accounts, if not for the workforce shortage across the country, which is acute in Vermont. Some eateries have closed or reduced staff or hours simply because they can’t find qualified help.

Both are paying historically high wages to lure staff.

Retail may have finally found its footing, with many malls and downtown shopping districts reporting an uptick in business since early summer. When the pandemic is eradicated — and that can be wishful thinking given that COVID cases are higher now than they were a year ago — we may begin to find that new normal of shopping and eating right around the corner.

But other aspects of real estate may never be the same. Warehousing, necessitated by remote shopping, keeps growing colossus-sized structures along the interstates. Demand for hard-to-site manufacturing plants is also on the rise. This could continue if the globalization of the supply chain will be forever altered by the flaws in the system exposed by the pandemic.

But the most profound changes appear to be in housing and office space. Typically, home prices do not come down, even during a recession. They may reach a point of stasis for an extended period (like the early 1990s here in Vermont), but homeowners are loathe to low-ball their own place — unless, of course, the housing bubble bursts, foreclosures lower prices and a recession suppresses demand. Homeowners may dump their car, their furniture, perhaps even their stocks, but most draw the line at putting their house on the market.

Office space, on the other hand, appears to have little future in the grand scheme of things. Like an oligarch’s yacht, gleaming glass towers draw little interest during a downturn.

Commercial real estate agents tell us smaller office buildings or co-working spaces are the future. This is driven by the pandemic, yes, but also by the changing nature of business. Smaller companies and sole proprietors don’t need enormous work spaces, in any case, and large white-collar firms have downsized their workforces by finding efficiencies.

The story is the same in Vermont as it is across the nation. Commercial office space has largely been downsized for going on 2-plus years now, according to an industry innovator Repvblik. At this point, it’s clear many commercial landlords will have to rethink the way they do things, even in places as old school and hard-nosed as New York City.

But Richard Rubin and his firm Repvblik have a plan to help distressed commercial real estate by buying properties and turning them into affordable or workforce housing.

Rubin, who has done similar work in his native South Africa, is now applying this model to US markets especially during the COVID-19 crisis. Richard and Repvblik are involved with projects around the US now, from LA to New York and many midwestern states.

Rubin said: “Commercial is going to be massively hit. When tech companies – always the early adopters, themselves historically large tenants and owners of commercial office – are telling their respective employees not to come back to work and to continue to work from home; the writing is on the wall.”

Meanwhile, HULA, on Burlington’s waterfront, is a sumptuous work and community space offering state-of-the-art technology. And like other co-working spaces that have sprouted across the nation, it is sited adjacent to restaurants and bars to meet the leisure demands of its clients.

HULA took the former Blodgett Oven manufacturing plant and turned it into a new-age space. Blodgett itself moved into a modern facility in Essex Junction.

It may take time for this new paradigm to sort itself out, but there is little question the office environment of “Working Girl” and “Office Space” is as dated as the movies themselves.

This is a boom time for construction in Vermont

That brings us to CityPlace Burlington. Conceived as a 14-story, multiuse complex, the development never got off the ground due to financing issues. The project might have been doomed in any case by legal issues. Early on, the proposal to transform the downtown area and reconnect St Paul and Pine streets faced a blur of opposition and lawsuits.

But it appears there is finally some substantial progress involving the gaping hole in downtown Burlington. The central portion of what previously was Burlington Town Center was demolished in 2018, leaving only the front portion of the old mall and the former Macy’s department store standing.

As first reported by Seven Days on September 21, a citizens group has dropped what appears to be the final lawsuit against CityPlace.

Perhaps more importantly, Seven Days reported on September 16 that a legal notice in the weekly newspaper indicated that a $26.32 million affordable housing project using some federal grant funds has been presented to the city.

According to the Seven Days story, CEDO Director Brian Pine said this is a “positive” action that “bodes well for the whole project.” He told the newspaper that because it alters the previously approved plan, the developers will have to modify their permit.

On or about September 30, 2022 the City of Burlington will submit a request to HUD for the release of HOME Investment Partnership Program funds under Title II of the Cranston-Gonzalez National Affordable Housing Act, as amended to undertake a project known as Burlington City Place Affordable Housing.

The project is located at 130 Bank Street, Burlington, Vermont and includes new construction of an 8-story affordable housing building.

The project is in the location of the former Burlington Mall building, which was demolished in 2018.

The scope of work includes the following.

Prior to the construction of the affordable housing project, a master podium structure will be constructed over most of the 2.53 acre parcel, which will support multiple mixed-use buildings, including the proposed 8-story 80-88 unit affordable housing building, and will accommodate parking under the buildings.

The master project also proposes reconnection of both Pine and St. Paul Street between Bank and Cherry Streets. This environmental review includes the entire land area of the parcel, the parking and podium structures, reconnection of the two streets, and the affordable housing building itself.

Mitigation measures include adherence to a Vermont Department of Environmental Conservation approved Corrective Action Plan, which requires the installation of a sub-slab depressurization system (SSDS) to mitigate impacts from off-site vapor migration, monitoring of the SSDS, and additional soil testing, if required, for the purposes of assessing potential urban soils if any are encountered, and management of such soils.

The SSDS will double as a radon mitigation system.

Mitigation measures also include that the project shall acquire all necessary permits before the project can be completed.

The estimated total cost of the project is approximately $26,320,000 including $275,000 in HOME funds from the City of Burlington.

FINDING OF NO SIGNIFICANT IMPACT

Majority ownership for the entire project has changed hands a few times over the years, and now two related groups are vying to rebuild the old mall and parking garage into a modern complex, in three phases. The timeline for this work is still uncertain, but CityPlace developer Don Sinex told VermontBiz in mid-March that construction could begin as early as this fall, with completion expected 24 to 30 months after that.

While his partners have been mostly quiet since they took control of the central section last May, Sinex now anticipates he will demolish all remaining structures in Phase 2 (including the former LL Bean and old mall as well as the Church Street facade) before eventually razing the Phase 3 Macy’s after July 2025, when the Burlington High School lease expires.

Sinex said Phase 2 would include a 175- to 200-room hotel with one retail store on the new St Paul Street; two new retail spaces facing Church Street, with about 15 apartments above; and an arcade running from Church to St Paul. He estimated the cost at $60 million. Permitting has not been fully resolved as of late August, and financing is still uncertain. It is also possible that a handful of legal issues will have to be resolved up before moving ahead.

At that time, they revealed plans to build 427 housing units, 40,000 square feet of retail, restaurants and a 422-space public parking garage. They remain minority partners in Phases 2 and 3.

Sinex said that, despite the project’s smaller scope, the three phases will still cost about $175 million. When the project was first proposed in April 2016, he put the price tag at about $220 million.

Burlington voters will face a $165 million bond request for a new school and technical center on November’s ballot. The bond will cover most of the estimated $190 million cost of the new building, which will be sited at the abandoned high school off North Avenue in the New North End of the city.

As CityPlace continues to search for financing, leaving a physical and metaphorical hole in downtown, it would be easy to suggest that Burlington’s neighbors in South Burlington and Williston are the big winners.

South Burlington’s City Center project, among others in the city, will bring more housing — including much-need senior and affordable units — to a rapidly growing commercial area.

Williston, meanwhile, has benefited from a similar explosion of development at Taft Corners. The newly developed area features a hotel; market-rate and affordable housing; new restaurants; and shop-sized retail. Another boutique hotel is being completed just down Williston Road.

A new zoning proposal in Williston aims to make the Taft Corners commercial center more walkable and people-friendly; increase building and housing densities; and create a more uniform look. It could also help limit sprawl into the rural areas of town. Some local developers oppose the rezoning because they say it would require changes to projects already in development or in the planning stages.

Meanwhile, the nation’s largest bank, Chase, is opening three new branches in Chittenden County to service an estimated 135,000 customers in Vermont. The branches are in Burlington, South Burlington and Williston. While opening brick-and-mortar branches may seem counterintuitive in an era of online banking, banks still see value in having a physical presence in growing commercial regions.

South Burlington and Williston are not immune to the realities of the modern, COVID economy.

Both municipalities have vast amounts of empty office space in several locations. Restaurants, too, are struggling; two restaurants in Williston were recently forced to close their doors.

The office space that has been abandoned does not seem to have logical new tenants. Financial institutions have discovered the value of employees working remotely or have consolidated their back-office operations while using more technology.

The space may seem ripe to retrofit into apartments, but the cost of doing so appears prohibitive. Public money from state and federal sources for refurbishing existing structures is generally being targeted to replenishing the housing stock in traditional downtowns.

Large, Class A office buildings — or even abandoned former restaurants — in good locations like Taft Corners or Kimbell Avenue and Shelburne Road in South Burlington are likely to feature “space for lease” signs for some time to come.