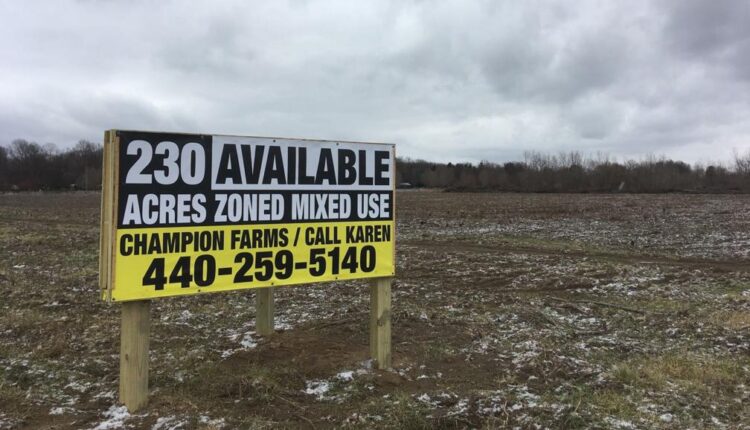 The Perry Joint Economic Development District Board and Perry Village Council are both enlisting the services of Cushman & Wakefield to help the 230 acre property reach its full potential.

Champion Farm is a former horticultural nursery that has been touted as a prime location for redevelopment with a mix of mostly commercial, medical, office and light industrial tenants.

It was hoped that these new tenants would generate payroll income and strengthen the community’s tax base within the established Perry Joint Economic Development District. However, almost three years after a study was published suggesting ideal uses for the Champion Farm site, no new development has taken place.

Perry Village leases Champion Farm 150 southerly acres, while Perry JEDD leases 80 acres on the north side of the property in Perry Township. Both companies will acquire ownership of their respective land by May 2022 when they complete payments for their leases with Perry School District, the current owner of the property.

Perry Schools bought Champion Farm in 2017 when it was owned by the bank.

Recently, the Perry Village Council and Perry JEDD Board decided to step up efforts to turn Champion Farm’s barren land into a bustling business complex.

The village council, at its April 8 meeting, approved a resolution authorizing Cushman & Wakefield to market the 150 acre portion of the parish’s property to prospective tenants.

The contract does not cost the village any money unless the real estate company secures a commitment from a developer.

“I don’t see any disadvantage,” said councilor Mike Glover regarding the pact. “Obviously the property is not moving as fast as it is.”

During a meeting on April 15, the Perry JEDD board approved a separate agreement calling on Cushman & Wakefield to commercialize their 80 acres. This stretch covers the front along North Ridge Road or Route 20, which is considered an ideal location for retail development.

The terms of the JEDD board of directors contract with Cushman & Wakefield are pending, said Karen Sundy, the panel’s finance officer. However, Sundy said it made sense for the two government agencies to enter into agreements with the same company so that the entire Champion Farm property could be coherently marketed.

The Perry JEDD board of directors is already working with a real estate company under contract to sell 80 acres of land owned by the district at the intersection of Perry Park and Clark Streets in Perry Township.

One of the brokers for this package is Alexander Russo, Senior Vice President of Cushman & Wakefield. Russo will also play a prominent role in promoting the Champion Farm website.

Russo, who is based in Cushman & Wakefield’s Independence office, held a video conference call with the Perry Village government leaders to discuss the company’s services.

“I think the nice thing about what you get with us is that you not only get me, but 25 or 30 people working in our (local company office),” Russo said, noting himself his colleagues specialize in various aspects of commercial real estate. “It is a corporate project as we assume it is.”

About 2 1/2 years ago the Perry JEDD board posted a sign on the north side of the Champion Farm property that borders Route 20. The wording on the sign indicates that the site consists of 230 acres and is zoned for mixed use.

The sign also prompts prospective customers to call Karen at 440-259-5140. Calling this number will put a potential investor in touch with Sundy, who also acts as the administrator of Perry Township.

She recently said the sign has only generated about half a dozen calls since it was installed. Most of these callers inquired about houses being built on the property while one person was interested in using it for farming.

“And I need to let them know that our intentions are for economic development,” she said.

Housing construction should not be the focus of the renovation of the property. In fact, the Perry School Board’s approval of an agreement to purchase the property was subject to a charter limitation that limited the number of residential units on the property to a maximum of 50 to curb single-family home development, putting the greatest burden on a public school district’s finances. “

This is evident from the background information contained in the Champion Farm Joint Land Study conducted in 2018.