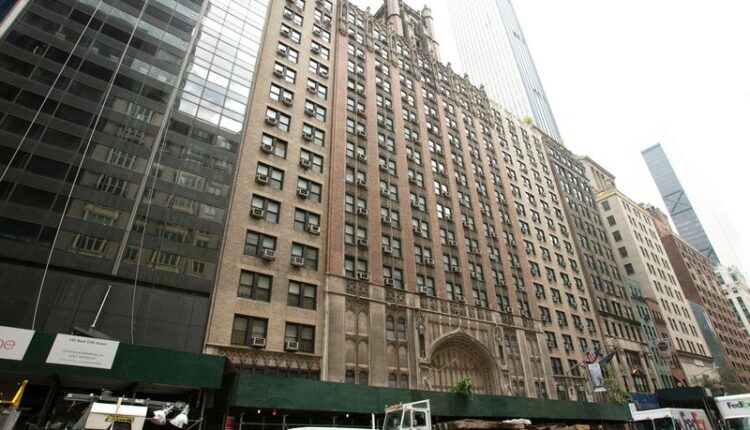 The Metropolitan Towers Condominium, a black glass high-rise by Macklowe Properties of 240 apartments on 78 floors that went online in 1986, in a way heralded the block’s transition to a hub for wealthy condo buyers. Features include a pool, housekeeping and an exclusive dining room on the 30th floor with free breakfast. Buyers of the building can finance 90% of the cost, and investors seem numerous based on the number of one-bedroom rentals available from $ 4,700 per month this month for a one bedroom. On the sales side, the most expensive unit was a four-bedroom duplex penthouse for $ 10 million that has been lingering since 2019 when it hit the market for $ 11.5 million, though it then sold a 32-Etagestudio, according to StreetEasy.com. Once owned by entertainment giant Sony, the penthouse was sold to developer Waterbridge Capital for $ 7 million in 2014, according to records, although the company, led by Joel Schreiber, is currently $ 41,300 behind in community expenses. The homeowners association pledged the apartment in December. Waterbridge did not answer a call for comment.

This 60-story office building, Carnegie Hall Tower, which features a golf simulator among other things, was developed by the Elghanayan family in 1991 and is now owned by TF Cornerstone, a subsidiary of the family. The current vacancies in the building include the 28th and 29 Floors. No. 152 has become something of a powerhouse for real estate companies, with ABC Management, Greystone Development and the Naftali Group as tenants. More than a century ago, the Midtown enclave was an art district of Manhattan. The Rembrandt was on the site, a 6-storey apartment building from 1881, which is considered the city’s first residential cooperative. The painter Childe Hassam once lived there. But the building’s fortune fell in the mid-20th Century, and the city eventually took possession of it before demolishing it in the 1960s and replacing it with a car park for Carnegie Hall next door.

Calvary Baptist Church, whose Gothic front doors are adorned with the words “We preach Christ / Crucified, Risen and Coming,” developed this red brick building in 1931 and has lived in it since, although not all of its 16 floors are for worship. At the top of the nave is the closed Salisbury Hotel, a sleek proposition in an increasingly opulent neighborhood that closed last year. By 2024, a development team including Cain International plans to replace the pre-war building with a 26-story office tower with 10,000-square-meter floors and a new auditorium that will belong to the church. The church floors will also contain a gym, classrooms and a chapel, the developer said. Although No. 125 is Cain’s first office project in New York, the company is investing in the Aman Hotel and Residences – a redevelopment of the Crown Building at nearby 730 Fifth Avenue – due to open later this year.

For better or for worse, a crystal clear condominium on top of a Hyatt hotel built by Extell Development with support from a United Arab Emirates sovereign wealth fund is one of the most talked about towers in the city of the past decade. His arrival – the groundbreaking ceremony was in 2009 and it opened in 2013 – heralded a turn from the office district to the residential enclave Billionaires Row. An early sale of a six-bedroom penthouse there to computer mogul Michael Dell for more than $ 100 million set a price record in New York that lasted for years. But the 73-story building has drawn criticism for its height, as it casts huge shadows over Central Park. A decade into sales, the 92-unit tower still hasn’t sold all of its sponsored homes. A four-bedroom resale in the building, which offers reduced property taxes through 2023, is valued at $ 44 million, up from $ 59 million in 2019. The building has outstanding amenities. An indoor pool, for example, plays music underwater and the library has a 7 meter long aquarium. The residents can have meals delivered by the hotel.

This pre-war brick and limestone rental building, the Briarcliffe, was purchased by developer Property Markets Group, who bought the 13-story, 33-unit property for $ 32.5 million in 1998. Over the years the units have been sold as condos and have depleted. In 2009, James Development, a firm specializing in unsold cooperatives, acquired 11 apartments in the building for $ 9 million, records show. (The following year, Extell bought flight rights from Property Markets to its neighboring apartment, 157 W. 57th.) In May, James sold one of his apartments – No. 10C, which has a fireplace – for $ 2.7 million, slightly less than in the fall of $ 2.9 million. Property Markets, meanwhile, helped develop Steinway Hall at 111 W. 57th St., a 60-unit tower, now in sell mode.

Vacant property owned by the Jewish Board of Family and Children’s Services, a charity, was sold for $ 60 million in 2009 to the limited liability company Ricland, which apparently still has an interest in the property, although much has changed . The 29-story, casement-lined building there, developed by ARK Partners in 2013, initially housed a 240-room outpost of the Viceroy hotel chain. But six years after it opened, the Viceroy was closed and replaced with a Le Meridien Hotel. Along the way, the New York Recovery Real Estate Investment Trust bought a leasehold from ARK for $ 148.5 million before being discharged for $ 41 million in 2018. According to news reports, steep rent payments were a problem. The buyer was the Arden Group, a Philadelphia company, whose hotel holdings include other Le Meridiens, Ritz-Carltons and Hiltons.

The Russian Tea Room restaurant, a tourist attraction that appears to have survived the pandemic, has anchored this place since the 1920s. In 2004 its 6-story pre-war building extending to West 56 Street, was bought for $ 19 million by RTR Funding, whose managing director Gerald Lieblich owns properties in Manhattan and the Bronx. But the owners of the lavishly decorated restaurant that offers afternoon tea were not always keen to sell. Macklowe Properties attempted to obtain aerial rights to the building for its condominium tower at 146 W. 57th in the 1980s with no success, according to The New York Times. A similar request from property developer Rockrose for his office building at 152 W. 57th was also rejected. The restaurant’s owners at the time said they wanted to reserve the right to construct an 18-story building.