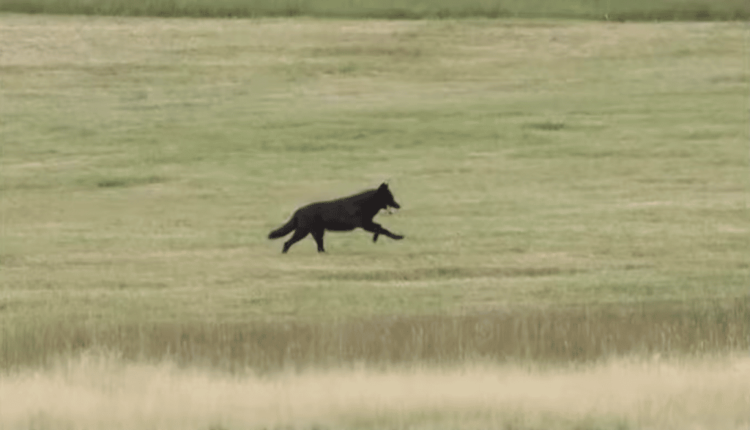 Commercial real estate trends and wolves in Meeker? Top stories of the week at SteamboatPilot.com

A black wolf photographed in the North Park area near Walden on Aug. 21, 2022.
Colorado Parks And Wildlife/Courtesy photo

Real estate agents in the commercial arena in Steamboat say many investors bought vacant land for development or vacant lots for commercial redevelopment during the past two or three years, leaving little commercial-zoned space available within city limits.

2. CPW finds no evidence of wolves near Meeker, where 40 cattle have been found dead inexplicably

Initial reports from early October blamed wolves for the death of 18 calves on White River National Forest land where cattle were grazing, which, if confirmed, would have meant there was another wolf pack making a return to Colorado ahead of schedule.

The start of a multi-day storm came early in the week and the latest rolled in on Friday.

4. Merger of grocery titans: Cause of concern or a boon for consumers?

The proposed $25 billion merger between Kroger — the parent company of Colorado’s largest retail grocery chain, King Soopers — and Albertsons, which operates Safeway, is raising questions about whether the state’s shoppers will ultimately benefit.

Government officials, academics and union representatives fear a future with climbing costs, more food deserts throughout the state and farmers receiving unfair prices. But others aren’t worried yet about the impact of the deal approved by the boards of both companies, which is expected to close in early 2024. The Steamboat Christian Center photographed on Nov. 28, 2022 will be the sight of the new Steamboat Christian Academy, a new faith-based school (Pre-k through eighth grade) that hopes to open its doors in the fall of 2023.
John F. Russell/Steamboat Pilot & Today

In January, a task force will introduce a new educational concept to the community with hopes of opening Steamboat Christian Academy by fall 2023.

“We have developed a curriculum, and we’re putting together a team of educators,” said Jen Foss, a member of the task force that’s doing some of the groundwork for the school. “We are putting together our admissions platform, and we’re going to start rolling out information to share with the community in January.”

Officials in Steamboat Springs are urging residents to remember that residential and commercial snow removal and storage can have long-lasting effects if not handled properly.

“Melting snow is stormwater water too. Snow picks up debris, chemicals and other pollutants that can end up in our streams and river,” said Water Resources Manager Julie Baxter in a news release. “We’re asking everyone to keep this in mind this winter and pay attention to where you put your snow.”

7. An area in Routt County is more at risk for avalanche than most of the state right now

After some big storms early in November, conditions have dried out around Steamboat Springs, but a storm is forecasted to bring at least a few inches of snow this week. If that happens, it could elevate the risk of avalanche.

“The surfaces are all weakening, which right now means that they’re getting softer, but when storms begin to move in again, that’ll be quite a dangerous layer,” said Rebecca Hodgetts, a forecaster for the Colorado Avalanche Information Center. Mountains around Steamboat Springs are under an avalanche waring until Sunday, Dec. 4, as much of Colorado is seeing increased avalanche risk.
Colorado Avalanche Information Center/Screenshot

While this warning pertained to earlier in the week, the CAIC has put the Park Range and Flat Tops under another warning through Sunday.

Real estate transactions in Routt County surpassed $18.1 million across 17 sales for the week of Nov. 18-24.

Summit’s ski areas made the cut for the list again this year, but several improved their ranking from last year while others made a significant drop.

Ryan Reynolds, CLU, President of Grimes Insurance Agency, pinpoints real estate investing as one of the keys to financial freedom

The past three years for Allied Properties Real Estate Investment Trust (TSE:AP.UN) investors has not been profitable