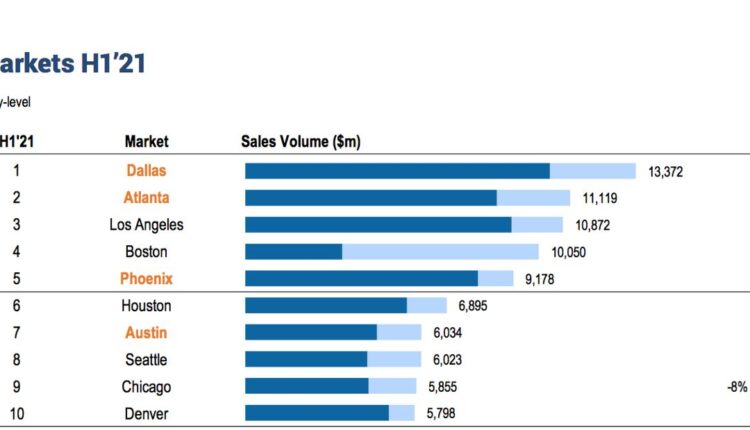 The Dallas area was the country’s top commercial real estate investment market in the first half of 2021.

Dallas claimed the top spot in real estate it won at the start of the COVID-19 pandemic last year, according to a new report from Real Capital Analytics.

“After taking the top spot in 2020, Dallas was again the number one market for US commercial investment activities in the first half of 2021,” said Real Capital analysts in their latest industry update. “Unlike 2020, Dallas didn’t make it to the top of the list due to a push from portfolio activity.

“For the first time, Dallas would also be ranked number one market in the first half of the year due to its single asset deal activity.”

The sale of dozens of local shared apartments and warehouses, as well as the $ 700 million purchase of the Crescent Complex of Uptown Dallas, all contributed to the huge real estate investments that year.

The Crescent was ranked the second largest commercial real estate deal in the country for the first six months of 2021.

Houston ranked sixth with nearly $ 7 billion in transactions in the first half of the year. Austin finished seventh with more than $ 6 billion.

The Dallas area had nearly three times the volume of commercial real estate investments as Manhattan, where deals were down 39% year-over-year.

“A year ago we found that a storm had hit the commercial real estate markets, but the headlines for the second quarter of 2021 suggest that this storm is largely over,” analysts at New York City Real Capital Analytics said in their latest study. “There are still problems and some minimal signs of a price adjustment, but the effects of the pandemic have not been as bad as many feared.

“The market as a whole has not only recovered, but is possibly in a new expansion.”

Nationwide this year, the largest purchase sums for commercial real estate have been industrial and multi-family houses. Retail and hotel sales had some of the lowest volumes.