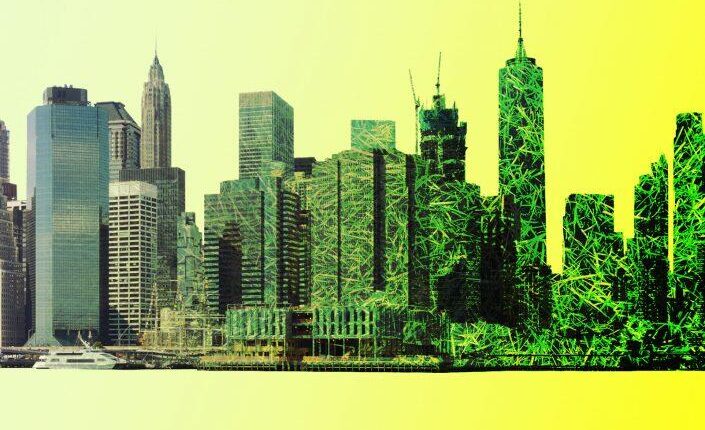 In real estate, green is not the new black – not yet. But if the capital markets continue to call for more sustainability and increase the pressure on portfolios with high carbon emissions, owners could soon no longer be in the black unless they turn green.

Last month, many of the makers of the world economy met with heads of state and policy makers at the United Nations climate change conference known as COP26. Promises were made, speeches made and urgent statements made to combat the climate crisis. But has something essential emerged to which the real estate industry – a leading cause of climate change – can react?

“There’s going to be a certain rhetoric about this,” said Greg Smithies, co-head of the climate tech team at real estate venture capital firm Fifth Wall, and was in Glasgow for the conference. “However, there were important things that needed to happen that were most relevant to our industry. Fifth Wall has announced commitments of over $ 300 million to its climate technology fund from industry players including Invitation Homes, Equity Residential, Hudson Pacific Properties and Ivanhoe Cambridge, as well as the New Zealand Pension Fund. It seeks to invest that money in companies that develop and scale technologies that can decarbonize the industry.

I met with Smithies to understand what came out of COP26 that could move the needle in real estate, and what positive results he found in a conference that has been defamed as “all talk, no action”.

Did the properties have a real place at the table this time? Has it sent executives with check-signing powers and the ability to influence decision-making?

Traditionally, these conferences have not been well represented. But of every person I spoke to, about half were from industry, and the titles were VP levels and above, all the way through to C levels. Overall, the industry presence and industry presence here was much greater than in previous years.

How substantial were the discussions? Was it more like “Climate change is an existential threat” or more feasible, like “Let’s arrange a few meetings, let’s talk to some companies?”

Refrigerants in old world HVAC and air conditioning systems are 10,000 times worse for global warming than CO2. In the run-up to COP26, we saw a number of new global regulations on refrigerants. We’ve also seen regulations on methane, which is five to six times worse than CO2 for global warming. Our buildings use a lot of natural gas for heating, so this is very relevant to us.

“Buildings are worth less when they are under water or on fire.”

The cost of capital is just as important. If you consider how all that money goes into the real estate industry, it goes out of sovereign wealth funds, out of pension funds, into funds of funds, and then into capital markets and REITs. But the tails that wag the dog are those massive global rents and sovereign pools of capital. And what we saw at COP is the skyrocketing number of organizations making ESG pledges, making zero carbon pledges. Ultimately, we’ll see an acceleration in the trend that clean, green buildings should lower the cost of capital.

In 2020, BlackRock’s Larry Fink dropped a bombshell by saying that his company would avoid investing in companies that “pose a high sustainability risk.” What’s the newest iteration of this?

The latest figures suggest that around 40 percent of the world’s assets under management are now invested under an ESG mandate. Basically $ 1 in $ 3 is looking for clean, green projects. That’s just on your cost of capital side.

At the same time, buildings are of less value from a resilience standpoint when they are underwater or on fire. There are $ 326 trillion worth of buildings out there, which means that buildings typically represent the largest pool of risk in the insurance industry. The insurance industry is now also redesigning all of its underlying actuarial models to take climate risk into account.

And this is one of the other great realizations of COP: It’s very difficult to make money on a building if you can’t insure it and therefore can’t rent it out. The COP estimates therefore assume that around 14 trillion US dollars in buildings worldwide will be uninsurable in the next 20 years.

Another big discussion seems to revolve around a global framework for carbon trading.

This will ultimately have the greatest impact on our industry. Trading in carbon offsets and emission allowances was very closed for certain markets – there is a market in California and New York is thinking of starting one, Europe has its own market. In the capital markets, it is very difficult to have futures on anything when you have several different markets.
What happened right at the end of COP26 was that all 190 countries agreed on a basic framework that will allow us to start standardizing these assets so that we can actually have a global carbon market. Just like trading stocks between the London Stock Exchange and the New York Stock Exchange.

Read more about the interface between real estate and climate change

You need some kind of LIBOR …

Exactly. The result of COP is that we now actually have a LIBOR. The framework that ultimately makes us a global market.

A big headline was that $ 130 trillion Net Zero Alliance championed by Brookfield’s Mark Carney. What do you think of this number – is it hot air?

There are shades of gray. Every time you bring together a capital pool as large as it is called, there is a tradeoff between the size of the pool and the specificity of the focus on the climate. When you have such a large capital pool, it means that you can’t focus much on real climatic things. At the same time, it’s important that people see that there is a dynamic in the environment and that people are leaning on it. The market has to move in that direction for the average company out there to be able to say, “Okay, we can justify spending clean, green things because we know investors wanted it – just look at the Net Zero Alliance. “

How much of the discussion revolved around the use of existing technologies versus research and development into new climate technologies?

For example, there were statements from John Kerry that our existing technology can only solve about 50 percent of the problem. That is why we also have to invest in R&D. What we’ve seen is basically a double underlining that the existing technology we have and any policies that drive that adoption and businesses like getting tax breaks on purchases are important, but it only solves about half the problem . Hence, governments should invest in things like money in research and development to bring technology out of the laboratory and onto an industrial scale.

From a private sector perspective, how about investing in air conditioning technology for real estate?

If you look at the balance sheet of the real estate industry, the total expenditure on R&D is zero. But there’s this slow awakening that when you’ve made a commitment to some kind of carbon pledge – which you likely have because your investors are asking for it or you seek a lower cost of capital – that you can’t achieve with existing technologies. Hence, you need to invest in research and development to help develop new technologies.

“We have taken a number of very good steps – regulations on refrigerants and methane, framework conditions for CO2 trading. What we missed is setting a global carbon price. “

Our hypothesis is that even in the real estate industry, the people who make good R&D spending will be leaders in this area.

What would you have wished for from this conference? What was the lack of industry-relevant topics?

I actually went in with very low expectations. The problem is, it was set up like, “This is our last best hope, and if we don’t do everything right now, we’re totally screwed.” Realistically, these things move in steps. We have taken many very good steps. Refrigerant and methane regulations, framework for CO2 trading, great.

What we missed is a global carbon price. Let’s say if Europe sets a price at which it will tax people who make dirty steel, then you also want them to, say, charge a price when steel comes in from China to pay these two producers on an equal footing . We haven’t seen a good framework like this put in place.

And what is Fifth Wall’s position in all of this? How did you spend your days at COP26?

Real estate is a global industry. It is the largest asset class in the world. And in most countries it is 10 to 20 percent of GDP. Whenever one of the finance ministers of these countries or someone else writes guidelines, the real estate industry should be there. Historically, as an industry, we’ve been bad at uniting and getting a seat at the table. The most important thing we tried to do was be an industry envoy to make sure they had a seat at the table in discussions where we have historically been under our weight.

Real estate tends to be above its weight at the local level, but not at the international level. Most of the biggest real estate companies haven’t really signed up for this whole climate technology thing, haven’t decided to shape the climate policy.

We want to inspire more in the industry to join the consortium we’re building. But just because most of the industry is not registered doesn’t mean we can’t start stepping into the hornet’s nest with national and global regulators to get a seat at this table.

This interview has been compressed and edited for the sake of clarity.

(Write to Hiten Samtani at [email protected]. Click here to read the REInterview, a series of his in-depth conversations with property leaders and newsmakers.)