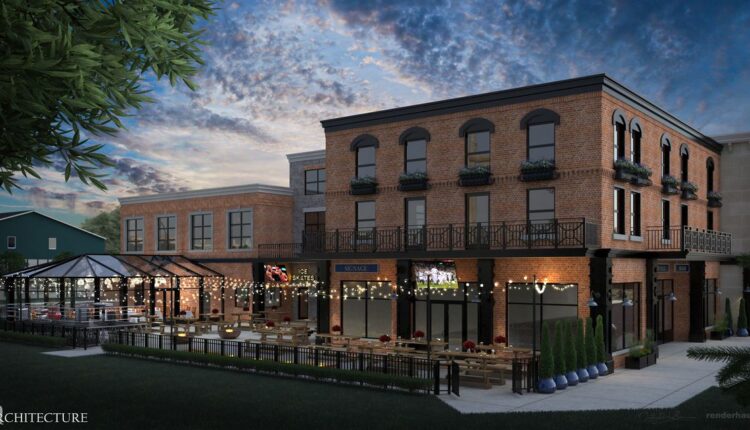 GRAND BLANC, MI — For Erik Perkins, everything originated in February 2020, before the pandemic shut the world down.

He asked officials with the city of Grand Blanc if they were interested in putting a beer garden near Physicians Park in downtown.

It was the dream of Perkins and his wife, Sara. Perkins coaches businesses for a living, and with the pandemic shutdown, his travel slowed down.

“I said, ‘Maybe this is the time when we start to look at exploring with the city and (an) opportunity to build everything we wanted to do right here in downtown Grand Blanc,’” Perkins said. “Even though, really, at the time, there hasn’t been a major development in our downtown and I was curious kind of about why.”

Over two years later, their dream became a reality.

An $11-million, mixed-use building is slated for downtown Grand Blanc.

It is a 30,000-square-building that will include retail businesses, a restaurant, entertainment and events on the first floor. The second floor will feature office space, meeting rooms and five residential units.

Part of the project was funded by the Michigan Strategic Fund. The other money was raised by Perkins’ friends and family.

“I was fortunate enough that every person I’ve asked along the way who was local who wanted to help with this has really put their heart into it,” Perkins said. “And so it’s been two years in the making of everyone going through the ups and downs of any development.”

Perkins made his proposal to the Michigan Economic Development and won the grant.

The state funding for the project is part of the $83.8 million awarded across 22 statewide community development projects through the Revitalization And Placemaking (RAP) program.

The RAP program is intended to spur investments that will address the inventory of vacant, underutilized office, commercial, and community spaces due to the pandemic by supporting efforts to repurpose them for the community to enjoy.

Perkins said it was important for him to help build a strong downtown. A lot of the area is former residential space, and the buildings aren’t there anymore.

“There’s a lot of things working against the natural act of building a downtown; mainly, that there wasn’t one really to begin with,” Perkins said. “I’m hoping that the development brings that intangible element that feels like a heartbeat by really just creating a development that’s very open minded and open in a way we have a beer garden where anyone can come sit, without any pressure to leave.”

The perks of the development will include an ice skating rink where Perkins will rent ice skates to people and a running water fountain, he said. The sound of water will add a “human connection point to nature,” he said.

The hope is to put a shovel to the ground this winter and take about 16 months to build the development, he said. The goal is to open officially in about two years.

“Everyone that spent on the project, honestly, they put their heart first and they’ve all taken a bit of a risk on this project,” Perkins said.

Read more at The Flint Journal: