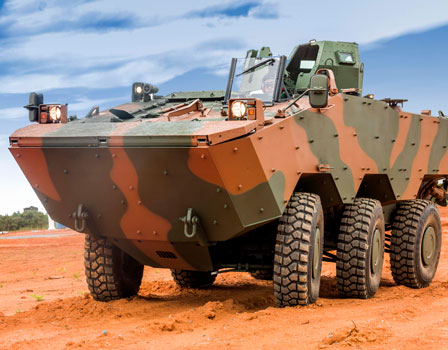 Isarel’s Elbit Systems has signed a contract with Ghana for the delivery of eleven Iveco Guarani 6 × 6 armored vehicles to the country.

The vehicles are manufactured by Iveco Defense Vehicles in Sete Lagoas, Brazil, and are equipped with remote-controlled REMAX weapon stations, according to Zona Militar. The REMAX for 7.62 and 12.7 mm machine guns is manufactured by the Brazilian company Ares Aeroespacial e Defesa.

The VBTP-MR Guarani (Viatura Blindada Transporte de Pessoal – Média de Rodas / Armored Personnel Carrier Vehicle – Medium Wheeled Type) was developed by Iveco and the Brazilian Army as part of their Urutu-III modernization program, which supports the Brazilian EE-11 Urutu. intended to replace vehicles. In 2009 a contract was signed to co-develop the vehicle.

The 14.5-ton (curb weight) amphibious vehicle family is equipped with an Iveco FPT 9 liter, 281 kW (383 PS) bi-fuel engine, which is coupled with an automatic transmission and enables a top speed of 100 km / h. Two water nozzles in the trunk area enable amphibious operation. It can carry 11 people. It is 7 meters long, 2.7 meters wide and 2.3 meters high and can be transported by C-130 Hercules and C-390 aircraft.

It can be equipped with manned and unmanned turrets with an armament of 5.56 to 30 mm. Various configurations of the modular vehicle have been developed to accommodate functions such as personnel carriers, command posts, salvage, ambulance, etc.

In addition to Brazil, the Guarani was also ordered by the Philippines and Lebanon. The Philippines deal was brokered by Elbit, which will supply turrets and subsystems manufactured by Elbit.

According to official records of a meeting of the Parliamentary Portfolio Committees on Health and Defense on August 3, 2020, there is an agreement between the Israeli discount bank and the government of Ghana, which is insured by the Israeli foreign trade risk insurance company. A $ 74 million credit facility is combined with a $ 12 million commercial loan.

Ghana said the takeover will equip the army to deal with the potential impact of terrorism, people smuggling and other security threats along the northern border with Burkina Faso. They are also used for counterterrorism operations and in support of police homeland security operations.

At the time of publication, Elbit had not responded to requests for comment.