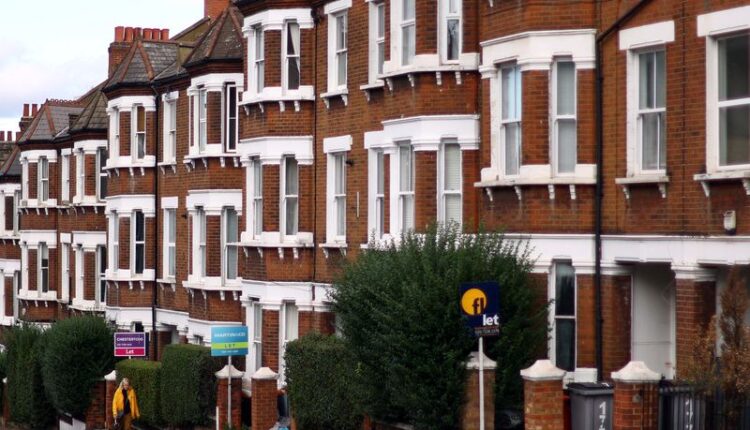 © Reuters. A woman walks past houses ‘To Let’ in a residential street in London, Britain September 27, 2022. REUTERS/Hannah McKay

(This Jan. 18 story has been corrected to say 800 billion, not million euros, in the second paragraph)

LONDON (Reuters) – More than a third of European investors plan to cut their allocations to real estate in the next two years, trade body INREV said on Wednesday, as rising interest rates and falling valuations make the sector less attractive.

Thirty-seven percent of European investors intend to reduce their exposure, compared with 20% of North American and 5% of Asian Pacific investors, according to an INREV survey of 82 investors with nearly 800 billion euros ($869.20 billion) in assets under management.

At the start of 2022 only 4% of European investors planned to cut back last year, the survey showed.

INREV is the European Association for Investors in Non-Listed Real Estate Vehicles.

European markets have been particularly hard hit by inflation and an energy crisis as a result of the war in Ukraine.

Rising interest rates are increasing the cost of leverage – or borrowing – to invest in real estate, while making other markets such as fixed income more attractive than before, industry specialists say.

European investors currently have 10.8% of their investments in property, above target allocations of 10.5%, the INREV survey showed. A sharp drop in prices last year in other asset classes means property makes up a disproportionately large part of investor portfolios, the report said.

The European non-listed real estate sector saw a 1.6% drop in capital values ​​in the third quarter of 2022, the largest quarter-on-quarter fall since the global financial crisis in 2008.

The drop in valuations was led by Britain, Iryna Pylypchuk, director of research and market information at INREV, told a media briefing.

UK pension schemes rushed to sell property and other assets due to a liquidity crisis in late September, which Pylypchuk said likely contributed to the fall in values.

Will Innovative Industrial Properties Inc (IIPR) Stay at the Top of the Real Estate Sector?

Latino Teens Are Deputized as Health Educators to Sway the Unvaccinated