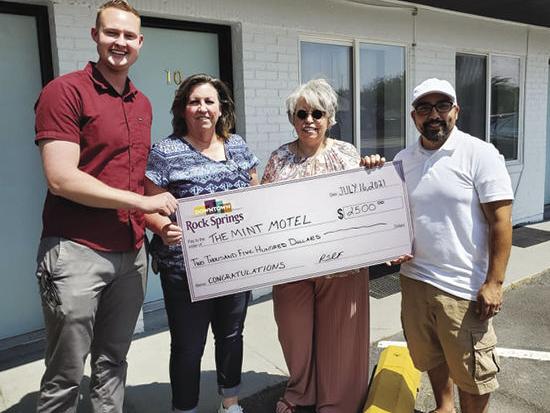 The Rock Springs Main Street / Urban Renewal Agency awarded the project a $ 2,500 grant from their Façade Improvement Grant Program to help with the renovation.

“This hotel has such a long history and it’s part of the Lincoln Highway so it’s nice to have it ‘back’,” said Maria Mortensen, URA CEO, in a press release.

“Since this is one of the main corridors to Rock Springs and Downtown, restoring the lots is critical to making a positive impression on visitors,” she said.

During the ribbon cutting on July 16, the participants got to know the new owners and employees and took a look at the newly renovated rooms.

Logan Moffett, President and Founder of Moffat Group ReMax Associates, found the motel for sale online and began inquiring about its history, according to a press release.

“I eventually connected with Chad Banks in town and learned about all of the city’s efforts to revitalize downtown and the surrounding area,” Moffett said in the press release. “The more I learned about what was happening in Rock Springs, the more I wanted to be a part of it.”

“My hope is that other companies will see what is happening in their community and want to be a part of it,” said Moffat. “The main goal of the Mint Motel from the start has been to bring a new atmosphere to the area while preserving its history. Between what’s happening downtown and other parts of Rock Springs, companies should feel that now is the time to invest and move on with the current momentum. “

“We also want companies to use the Mint Motel as a clean and safe place to stay for their customers, friends and family,” he said.

“Revitalizing the Saddle Lite Motel has been a huge undertaking,” said Moffett. Not only was the condition extremely shabby over the years, but also the reputation. “

“The Urban Renewal Agency that approved The Mint Motel for the renewal grant program was their way of saying, ‘We all know the potential of Rock Springs,’ and they were ready to put their money where their lips are,” said Moffett. “We really appreciate the community’s support and hope that other local companies will know that the urban renewal agency has the backing for further development.”

“We felt the support of the city and community in this process and are looking forward to many successful years,” he said.

Real Estate Conclave: Know how your real estate investment will pan out for you – Managed Service