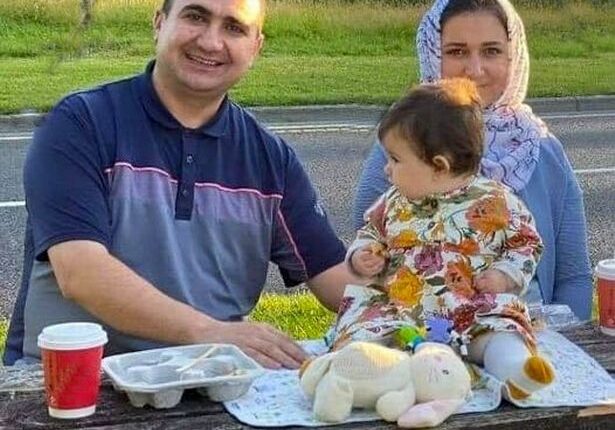 Mourning members of the Kurdish family who were killed in a horror crash on the M6 ​​in Galway came to Ireland and identified their bodies – and now have to wait in agony for their bodies to be brought back to their home country for burial.

Karzan Sabah, 37, his wife Shahen Qasm, 31, and their eight-month-old daughter Lina, originally from Kurdistan in northern Iraq, were killed in the tragedy on the M6 ​​last Thursday evening.

The Polish driver Jonasz Lach was also killed in the crash. He is believed to be traveling in the wrong direction at west speed on the M6 ​​when the horror crash that killed four people happened.

Devastated relatives of Karzan, Shahen and Baby Lina arrived in Ireland yesterday to identify their bodies and arrange for their repatriation to their home in Kurdistan.

The Kurdish Karzan Sabah, his wife and his young baby were killed in this serious traffic accident on the M6 ​​outside Ballinasloe, Co. Galway. Photo by Kurdish Irish Society

Philip Phelan of the Kurdish-Irish Society said the relatives of the young family in Kurdistan hope they will be repatriated this week.

He said: “Two family members have arrived here in Ireland and have already identified the body of the deceased.

“The death certificates must be issued. The repatriation is currently being handled through a lawyer in an attempt to get the bodies home as soon as possible.

“It is devastating to their families at home.”

It is assumed that death certificates are currently being processed and that the three bodies will not be transferred until Friday at the earliest.

It is believed that Karzan’s colleagues at NUI Galway will assist with repatriation and possibly hold a church service in Ireland before the bodies are returned to Kurdistan.

Karzan Sabah, 37, his wife Shahen Qasm, 31, and their eight-month-old daughter Lina, who originally came from Kurdistan in northern Iraq, died last Thursday evening in the tragedy on the M6

Karzan’s devastated sister Srwa previously said that her family was having trouble coping with the tragic deaths – and that they did not get to know little Lina before she died in the horror crash.

From her home in Kurdistan, she said: “We are in a real shock and still do not believe that this accident happened.

“We are in pain. Because they are far from us and we cannot even see their bodies.

“Their little daughter Lina was born in Ireland and we haven’t even seen her.

“We were eager to meet them and they wanted to return to Kurdistan, but they died.

“My mom and dad are still in shock and don’t want to believe that this happened.

“We are taking them to Kurdistan for the funeral because they are to be buried here, because we can visit their graves.”

Allegedly, Karzan, a graduate student, and Shahen, an engineer, moved to Ireland four years ago.

The young family returned home after looking at property in Carlow, where Karzan had been offered a teaching position at the time of the tragic crash.

The exit at Junction 14 of the M6 ​​motorway that killed four people in a collision with three vehicles on the M6 ​​in Co Galway.
(Image: Mick ONeill Monpics Photography.)

Karzan, Shahen and Baby Lina were due to move into their new home yesterday.

In a statement, Remax Property Experts Carlow said, “We are absolutely devastated to learn of the tragic deaths of Karzan Sabah, Shahen Qasm and Baby Lina, who died on their way home Thursday night.

“You should move into one of our managed properties tomorrow.

“Sometimes things happen that put life in perspective and this is really one of those times.

Headed Away to School? Here’s What Students With Health Issues Need to Know