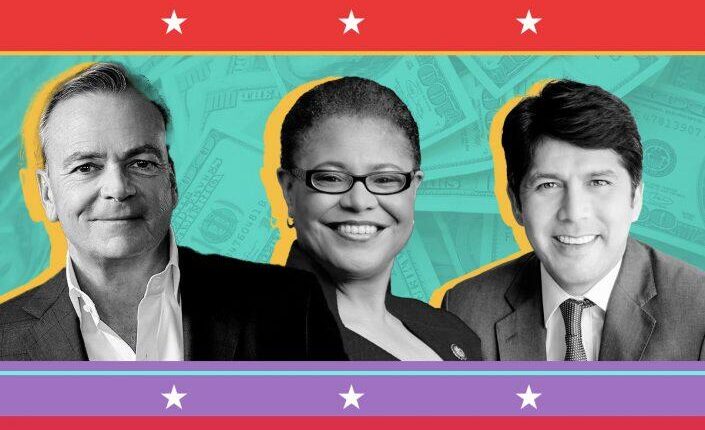 For the first time in nearly a decade, Los Angeles has a highly competitive, attention-grabbing mayoral race — a contest that was also recast, in February, by the splashy entrance of one of the biggest real estate names in town.

That real estate candidate, Rick Caruso, has ridden a historic spending blitz to surge from late entry to even-money: In the most recent public poll on the race, released last month, the billionaire developer notched 24 percent of the likely vote, a point higher than the tally for his main rival, the Democratic congresswoman Karen Bass, positioning himself as a likely qualifier for the two-candidate November runoff.

Caruso’s bid — bolstered with millions of dollars from his own fortune — has attracted plenty of industry support. But a deep dive into campaign finance disclosures shows that the real estate industry isn’t just supporting its own. TRD pored through the city’s database of campaign donations for Caruso, Bass and the council member Kevin de León, who has been polling a distant third.

The City of LA’s ethics committee, which posts donations to all city candidates here, does not explicitly categorize donations by industry. To come up with a tally for the contributions from Real Estate, TRD searched for real estate-related job titles listed by donors (some kind of profession, such as “attorney,” “CEO,” or “retired,” is listed alongside each contributor, often with more detailed company information), using search functions to tease out donations from brokers, developers, investors and other industry sectors while attempting to avoid duplicate counting.

The analysis of this methodology produced is imperfect. Some donations could have still fallen through the cracks, and the reliance on donors’ stated job descriptions was inherently limiting.

Still, as LA almost approaches its most charged mayoral race in recent memory, it’s a breakdown that offers significant insight into exactly who the industry is pulling for — and where it’s placing its bets.

(The primary will be held on June 7. If no candidate wins a majority — the most likely scenario — the top two candidates advance to the fall runoff. LA campaign finance laws allow individual contributors, including firms, to donate a maximum $1,500 for each election; the primary and general count as separate elections. A local ordinance also prohibits developers with projects before the City Council from donating. The data includes donations reported through April 23.)

De León currently stands as a longshot to advance past the primary. But the 55-year-old Democrat, a “proud progressive” who previously served as the first Latino leader of the state senate in over a century, has deep political connections and a recent tenure as a member of the LA City Council, which holds sway over much of the local development process.

Among the three top candidates — excluding Causo’s enormous contributions to his own campaigns — de León actually pulled in the most money from real estate. Those donations included more than $90.00 from dozens of developers and people involved in the building trade, including $1,500 from Robert Koerner, a principal at the major national firm Standard Communities; $1,500 from Ginger Hitzke, president of San Marcos-based Hitzke Development Corporation; and four $1,500 contributions from four different members of the Meza family, who are affiliated with the Van Nuys-based Edwards Builders and Developers.

De León took in over $29,000 from brokers, including agents who work for Compass, Cushman and Wakefield and Corcoran Global Living. Other donations included $1,500 contributions from Brett Dedeaux, president of the industrial firm Dedeaux Properties; Evan Friedl, president of Hartcrest Real Estate Advisors; and Jonathan Shapiro, a director at CGI+ and real estate lender at Skylark Capital.

Since she entered the race last fall, analysts have pegged 68-year-old Karen Bass, a South LA community activist turned respected congresswoman, as a likely frontrunner. (Bass also recently scored the LA Times’ endorsement.) Bass’ fundraising reflects this: Her $4.1 million in non-loan contributions is the highest among any candidate.

But real estate contributions are a small part of that campaign war chest. Bass’ $23,000 from the development sector includes notable contributions from people affiliated with the public and nonprofit sectors of the industry — local government, nonprofits and affordable housing. The names include executives such as Diann Viox, a manager at the Los Angeles County Development Authority; Sulaiman Kenyatta, a manager at the Los Angeles Economic Development Corporation; and Jackie Dupont-Walker, the founding president of the Ward Economic Development Corporation, the development affiliate of the Ward African Methodist Episcopal Church. Another donation came from Helmi Hisserich, an affordable housing consultant who previously led the city agency that’s now the Los Angeles Housing Department.

Rick Caruso’s campaign funding is in a class by itself. The developer’s financing blows all other candidates’ resources away — because Caruso loaned his campaign $22.5 million.

Caruso also has sizable support among brokers: He’s collected over $36,000 from over 130 donations from agents, higher than the corresponding figures for Bass and de León. Compass brokers led the pack, with nine donations; Douglas Elliman brokers showed up four times.

Overall, though, once loans from Caruso himself are taken out of the picture, the developer’s contribution totals from the industry actually lagged those of his two main rivals: He took in $6,200 from self-described real estate investors, about half the amount those professionals gave to Bass. Caruso also received at least $3,625 from property managers and $600 from real estate advisors.

Recreational Markets a Magnet of Affordability and Lifestyle to Both Leisure and Permanent Homeowners and Seekers, According to RE/MAX Canada