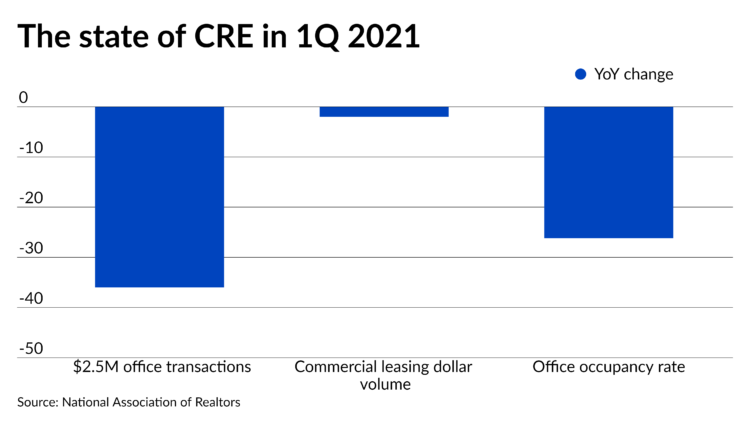 Investigating the roadblocks of commercial-to-residential conversions

A shift in people’s lifestyles after the coronavirus is underway as the need for remote working over the past year has shown that productivity can continue without an office. This reveal will rock commercial real estate in ways that analysts are only just beginning to understand.

“Offices will not be 100% the way they were again. Hotels in some markets don’t either, ”said Ana Bozovic, founder and owner of Analytics Miami and LiquiditySolutions, in an interview. “People tend to think that the present is sacrosanct. But things always change and history never goes back. “

According to a report by the National Association of Realtors, in the opening quarter of 2021, the dollar volume for commercial leases fell for the fifth quarter in a row and office occupancy fell for the fourth quarter in a row. Office vacancy reached 16.4%, a 13% year-over-year increase, and its highest level since 2010. In addition, 70% of companies surveyed by NAR reduced their office space in the first quarter of 2021, compared with 69% and 62% in the previous two quarters Quarter.

At the same time, the historically low mortgage rates of the pandemic led to a rush in property purchases and increased the need for more housing, especially at affordable levels.

This juxtaposition of residential and commercial space could seemingly converge as a problem and solution, since builders could ideally convert offices and hotels into residential properties. But there are several roadblocks in the way.

The federal and municipal support would be required to carry out scale conversions, as the restrictions on development and renovation costs are holding back much of the construction, said the director of real estate investments at Bernstein Cos. Phil Aftuck. The Washington DC-based investment company specializes in commercial property redevelopment and is currently converting the Mark Twain Tower in Kansas City, Missouri, and the Textile Building in Cincinnati into 200 residential units. Both were vacant office buildings that were bought from foreclosure.

Activity on remodeling projects has increased recently as large office space in urban centers across the country becomes increasingly redundant, Aftuck said. While this type of construction has the potential to open up more living space, its complexity translates into long project durations. Converting a building for a different use than it was originally intended typically takes around 16 months and sometimes more than two years, Aftuck said.

“You need a developer who understands this and a financing partner who knows the risk. You need to comply, you need tax credits to make it stand out, and you need a general contractor and subcontractor who have already done this and understand what they are doing, ”Aftuck said in an interview.

Getting into the basics of local politics requires understanding the unique and sometimes obscure local laws – headaches that will most likely deter many private investors from funding commercial property remodeling. Affordable housing activists have made efforts to urge local governments to fund it.

For example, on June 4th, protesters gathered in Buffalo, Albany and New York City to campaign for the passage of the Housing Our Neighbors with Dignity law. The bill would use $ 100 million provided by the state to convert distressed hotels and vacant commercial space into highly affordable housing, with at least half of the units being dedicated to homeless residents. The New York Senate passed the HONDA bill on June 10th, which allows the state’s Housing Trust Fund to begin funding the renovations.

“You have to have land, labor, materials, capital and demand. If you take any of these things away, everything will break down, ”said Chase Gilbert, CEO of Built Technologies. “Communities can help reduce the friction associated with approving new projects – because that’s the real bottleneck.”

Investors like Bernstein Cos. look for buildings in metropolitan areas that have government programs that give tax credits to those who do these redevelopments. They are usually located in secondary cities with rising rents and the demand for cheaper housing.

“It’s more of a conversation about community development, taking assets that would be eyesore if not converted, and assets [it’s] a real challenge to overcome when a particular mall or piece of art cannot be reused, ”said Jamie Woodwell, MBA vice president of research and economics. Since they don’t require a foundation and already have a footprint, conversions would be less invasive for these communities too, he explained.

Of course, it takes time and creativity to end the home inventory and affordability dilemmas with commercial redevelopments. According to Bozovic, another way to get more builders to participate would be to treat them in a similar way to renewable energies.

“It has to go the solar path where you choose to serve the common good – especially if it’s tied to affordable housing since this crisis isn’t going away – and you have some kind of government incentive for that.” She said.