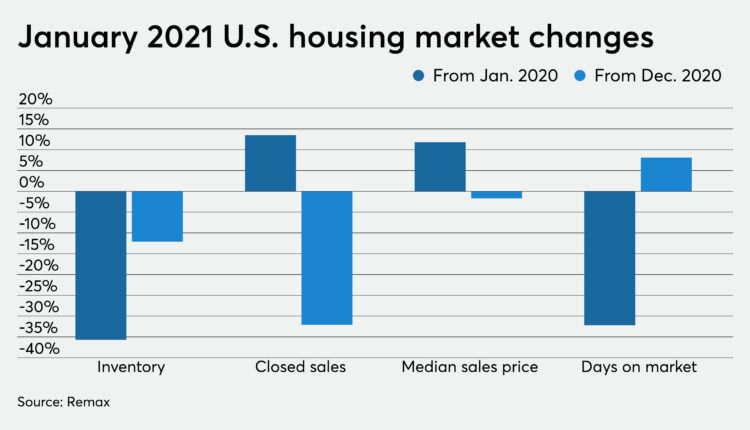 With record low mortgage rates encouraging an atypically high volume of home sales for the time of year, 2021 opened with indicators for another strong year, according to Remax.

The constraints remain, however: the number of properties for sale fell to its lowest level since Remax’s National Housing Report began in 2007, building high demand and potentially limiting future sales volumes. January inventory levels were down 12.1% month-over-month and 35.7% year-over-year. The national offer decreased from 1.8 months in December and 3.5 months in the previous year to 1.7 months.

Of the 53 largest metro areas, Albuquerque, New Mexico and Boise, Idaho had the lowest supply for the second consecutive month at 0.5 months. Denver, Phoenix, Salt Lake City and Seattle followed in a draw after 0.6 months. A 6-month delivery defines the market equilibrium.

While market time rose from a record low in December of 37 days to an average of 40 days, it fell from 59 days year-on-year. Omaha, Neb., Continued to have the fewest days in the market at 18, followed by Boise at 19 and a third-place tie with Cincinnati and Nashville, Tenn. At 21. The slowest times came at 99 days in Des Moines, Iowa, Miami at 88 and Augusta, Maine at 78.

“January home sales started the year off on a bang despite the current shortage of homes for sale. It signals that 2021 could be a historically good year for housing, ”Adam Contos, CEO of Remax Holdings, said in the report.

Closed sales in January were down 32.1% versus December, but volume reflected a 13.5% year-over-year increase. San Francisco outperformed the country with annual sales growth of 38.5%, followed by Anchorage, Alaska, with 31.7%, and the combined statistical area Wilmington-Dover, Del., With 30.9%.

Interest rates continue to drive consumer demand. According to ICE Mortgage Technology’s Origination Insight Report, the average 30-year FRM for closed-end loans fell from 2.93% in December to 2.88% in January, and from 3.96% per year.

The division of the loan types tended two-thirds to refinance versus purchase. The refi share rose from 60% in December to 50% in January 2020 as more borrowers took advantage of the interest rates below 3%. While a shift towards a more buy-centric market is expected later in 2021, the latest application data from the week leading up to February 12 shows that consumers are still refinancing in droves.