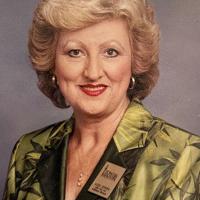 Lois Alene (Gibson) Jones rested in Knoxville in the early hours of January 13, 2022, surrounded by her husband and daughter. Lois was born in Kingsport and grew up in Church Hill. She attended both Dobyns Bennett and Church Hill High Schools. After graduating from Church Hill in 1960, Lois went to Tennessee Eastman. After 15 years of service, she left Eastman when their daughter Tiffany was born.

Lois was an active member of the Junior Women’s Club, where she held various roles and offices. She has volunteered for many organizations – the most memorable being Kingsport Trustbusters, where she recruited lots of friends to pick up trash at Fun Fest, Boone Lake and the Holston River.

In addition to volunteering, Lois loved traveling and visited Europe three times. Her last long adventure was in 2006 when she, Bruce, Jo Rita and Joe drove their RV across country! In the late 80s and early 90s, she enjoyed putting together trips to watch the Vols play soccer in California, New York, Florida, and Arizona. Lois was the ultimate cruise director and planned many cruises to the Caribbean in Carnival Cruise Line’s early years. When she wasn’t traveling and doing volunteer work, her hobbies were toll painting, calligraphy, collecting P. Buckley Moss paintings from Kingsport landmarks, and making phone calls.

In 1990 Lois returned to work with the acquisition of her real estate license and became one of the most successful realtors in the Tricity. She worked for Town and Country Realty, Remax, State of Franklin and retired after working with her friends at A Team Real Estate Professionals in 2011. Then she moved to Knoxville to be with her grandchildren.

Her parents Harvey A. and Sarah (Opal) Gibson and her youngest brother Mark precede her in death.

Lois always had an entourage and a group of friends with her wherever she went. Your friends Barb, Liz, Billie Sue, Jo Rita, Jeanie, Dolores, Carolyn, Rhonda, Lorraine, Jewel, Wilma, Pam and many more who know you were more like family than friends.

The family will receive friends at the Carter-Trent Funeral Home in downtown Kingsport on Saturday, January 15, 2021 from 11 a.m. to 1 p.m. A funeral service follows with Pastor David Salley. To truly honor Lois, you can wear your best of leopard print, fur, large jewelry, or Tennessee orange.

Bruce and Tiffany would like to thank the staff at UT Hospice, West Hills Heath & Rehab (especially Kat), and Franklin Kyle and Elder Law Firm.

In lieu of flowers, her honor can be given to the Cathy Hodges Memorial Fund, 9724 Kingston Pike, Knoxville 37922, to make memorable donations.

To express our condolences to the family, please visit our website at www.cartertrent.com.

If I Could Redo My Real Estate Portfolio, This Is What I’d Change