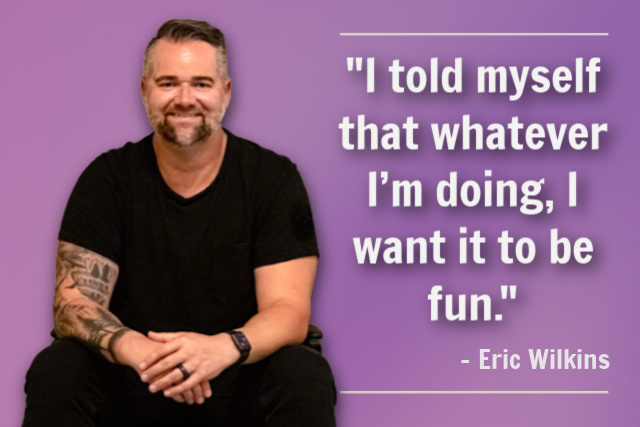 Eric Wilkins knows the secrets to a successful rookie year in real estate — hustle, be yourself, and make some reels.

The 36-year-old agent with Briggs Freeman Sotheby’s grew up in Dallas in a one-bedroom apartment with a single mom and brother. He graduated from Lake Highlands High School and Tarleton State University, then spent 15 years pastoring a church. He started GreenFox Marketing Solutions in 2016 to help his friends promote their businesses.

One thing is evident about Wilkins: he doesn’t do anything halfheartedly.

He started the marketing company in his garage and it quickly took off.

“It came out of nowhere,” Wilkins said. “I had three kids in three years, so money was tight. I was just going to run social media for some friends.”

One of those friends did a national fishing show, so Wilkins made promotional videos and helped with a website and social media for a $500 fee.

“By the end of that weekend, I had 10 clients paying me $500 a month,” he said. “Then I started working with Realtors and brokerages. I started working with builders on their websites and brands. As I continued down that path, I was in a position where I could study and get my real estate license, so I did.”

A passion for real estate

Wilkins was welcomed into the real estate industry by his friend Justin Hammond, another media expert, and the two recently migrated together to Briggs Freeman Sotheby’s.

“I definitely looked at how, growing up, my mom didn’t really like what she was doing as a career,” Wilkins said. “I told myself that whatever I’m doing, I want it to be fun. For a long time, I had the path of music. My role at the church changed from music to marketing. We started that church in a garage. By the time I left, there were five campuses and 3,500 people. I like starting things and building things. If you’re sitting still, I don’t like it.”

The married father of five took that energy and enthusiasm to his real estate career.

He recently got an email inviting him to his brokerage’s Pacesetter luncheon for agents who have sold $10 million in real estate in the first six months of the year. And did we mention he’s been a licensed agent for less than a year?

The Granbury resident credits his success to partnerships with builders and expertise in video and social media.

‘Welcome To My House’

As a board member at the Granbury Chamber of Commerce and Lake Granbury Medical Center, an advisory committee member at Granbury High School, and a musician at StoneWater Church, Wilkins is clearly committed to service. His marketing agency’s clients include the city of Granbury and Visit Granbury.

“I’m constantly looking for new creative ideas,” he said. “Video has been my niche.”

His videos are humorous and engaging, with a little sales pitch and, of course, good music.

He’s worked with builders, developers, and other agents, and created an episode series called “Exploring the Hood,” an homage to Hood County. He frequently showcases the great listings in his own DeCordova neighborhood.

When one of his videos got 12,000 Facebook views, he started getting phone calls from people saying, “Hey, come sell my house.”

Other Realtors have also gotten savvy with video, but Wilkins doesn’t see that as a threat.

“We think that’s good for us,” he said. “Because of our consistency and quality, the competition is only going to help us. I truly believe I can figure out how to do it the best. It doesn’t intimate me.”

His advice to others who want to take the digital marketing approach? Be yourself.

“I’m not the suit-and-tie-guy. I show up to meetings with a hat on, and I’m the only person in the room with a hat on,” Wilkins said. “That’s just me.”

His listings are primarily in Hood County for now, but he plans to branch out. He sells everything from standard three-bedrooms to million-dollar luxury listings. He also owns several Airbnbs.

“My goal is to work with developers and builders,” he said, noting partnerships with Rattler Ranch-True Texas Builders and Couto Homes. “I’m able to offer you marketing, branding, and a website, but if they will also use me as their Realtor it’s a win-win.”

Post-‘Roe,’ People Are Seeking Permanent Sterilizations, and Some Are Being Turned Away

UMortgage lifts the lid on its influencer marketing strategy

Blog Series: Investments in Real Estate for Purposes of…