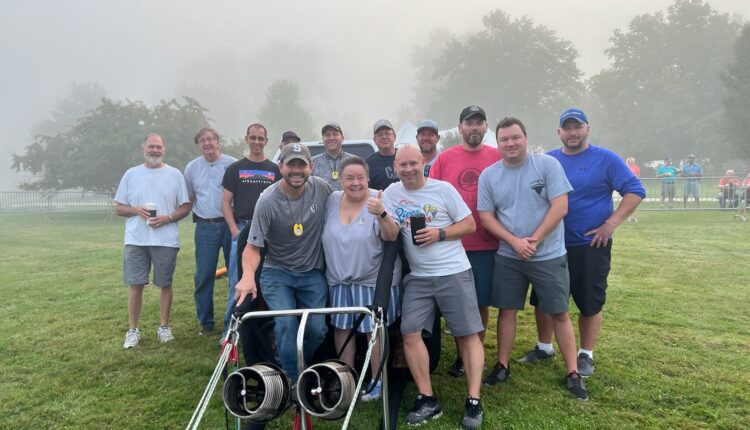 On a hot and misty morning on Saturday, Tamala Marks waited patiently in Chippewassee Park, ready to fulfill her lifelong dream of seeing hot air balloons ascend into the sky.

She didn’t know that just hours later, she would be having her own hot air balloon adventure.

“It’s beyond just crossing something off on your bucket list,” Marks said, on the verge of tears. “It’s something that if God said, ‘It’s time to go,’ I’m ready.”

Marks was diagnosed with uterine cancer in September 2021, and just finished four months of chemotherapy treatment.

“I don’t know what tomorrow is going to bring,” she said.

On Saturday, she was at the park by 5 am to make sure she didn’t miss the balloons being unrolled and blown up as part of the annual River Days festival in Downtown Midland.

Then, pilot Scott Strouse announced that foggy weather would prevent the pilots from being able to take flight and participate in their target competition.

“I tried so hard to be strong, and the tears just flowed from my eyes,” she said. “I was trying so hard not to cry.”

But after hearing about her battle with cancer and more than 10 heart surgeries, the pilots knew they couldn’t give up on taking flight that morning.

The next thing Marks knew, she was surrounded by pilots who told her that they would take her up in a balloon, safely tethered to the ground.

“We can go out and do something as simple as inflate six balloons for her, and she’ll remember that forever,” said Dennis Hall, the pilot who accompanied Marks on her journey in the sky.

They ascended about 10 feet off the ground in Hall’s red, white and blue “REMAX” balloon, and five other pilots also decided to hover their balloons for Marks.

“I don’t even know the word in the English language, it was beyond magical,” Marks said. “I can’t imagine a better feeling in the world. I was just so humbled that these people let me do this.”

Another balloon that was inflated for Marks was the “Cynthia Seal,” named after Cindy Rolfe, the wife of pilot Pat Rolfe. Cindy passed away from cancer in 2015.

Several experienced pilots said they had never seen a balloon fly in fog before, and the directors said the unexpected flight was “better than any competitive flight” they could’ve done.

“To be able to do that for somebody, and really change and give somebody that kind of positive, I just couldn’t be more proud of this balloon family that we have,” Strouse said.

Marks said it was typical of Midland’s “beautiful community” to go out of their way to fulfill their dream.

“If there’s any place that anybody can heal, it’s here in Midland,” she said. “I really feel in my heart that I’m going to beat it, but it’s a win-win situation: we either win by beating it or we win by learning from it.”

Marks said she was grateful to share a moment in the sky with the pilots. She said she hopes everyone can have the opportunity to experience a hot air balloon adventure.

Next year, her goal is to see the balloon glow.

Does Michael Jordan own a house in Chicago? Looking at NBA icon’s real estate investments across the world

The global hand file tools market is expected to grow at a CAGR of 4.23% during…