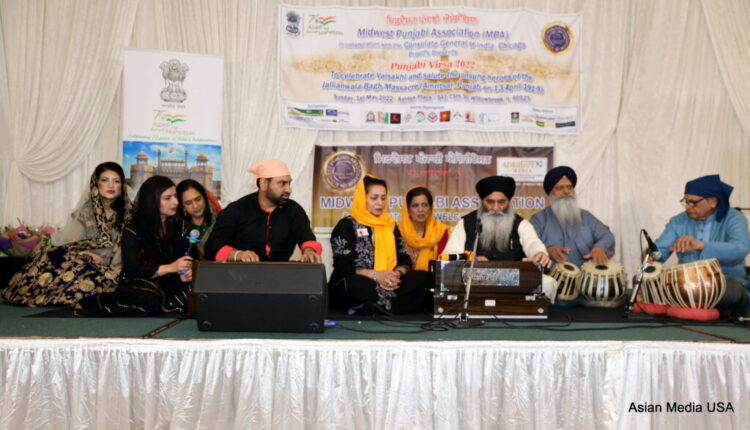 Midwest pays tribute to martyrs of the Jallianwala Bagh massacre

Participants at the May 1, 2022 Midwest Punjabi Association event in Chicagoland on the occasion of Punjabi Virsa, when tribute was paid to martyrs of the April 13, 1919 martyrs of Jallianwala Bagh. Photo: courtesy Asian Media USA

The Midwest Punjabi Association and Indian Consulate in Chicago paid tribute to the martyrs of Jallianwala Bagh where peaceful protesters were gunned down on the orders of the British General Reginald Dyer, for protesting the oppressive Rowlatt Act on April 13, 1919.

The celebration of Punjabi Virsa (Punjabi Heritage) was held May 1st, 2022 at Ashton Place, Willowbrook, IL as part of the Azadi ka Amrit Mahotsav, an year-long initiative on India’s 75th independence day, and to celebrate Vaisakhi as well as pay tribute to the martyrs of the Jallianwala Bagh Massacre. Gurmeet Singh Dhalwan, president, Midwest Punjabi Association (MPA) and founder of Adbhut Media gave a brief introduction of the event and briefed the guests about the past activities and upcoming initiatives of MPA.

He said keeping in mind the spirit of ‘Ek Bharat Shresth Bharat’ the MPA will be paying tribute to one author from Punjab, one from a regional Indian language speaking area, and one national language Hindi speaker. Tribute was also paid to Nobel Laureate Rabindranath Tagore by participants at the May 1, 2022 Punjabi Virsa event, because Tagore returned his British Knighthood when the Jallianwala Bagh massacre took place April 13, 1919. Photo Asian Media US.

Consul General Kumar commended the organizers for their unique initiative to throw light on the tragic Jallianwala Bagh massacre through writings and reflections of noted authors like Sardar Nanak Singh, Gurudev Rabindranath Tagore and Subhadra Kumari Chauhan. He spoke about the impact of the Jallianwala Bagh massacre on the national freedom struggle with the public sentiment across the length and breadth of India turning decisively against the colonial rule.

The master of ceremony was Prachi Jaitly. The Gurbani Kirtan was delivered by Bhai Jagat Singh Dilliwale and Bhai Bhagat Singh Chicagowale, followed by recital of Tagore’s poems and poems from the Punjabi collection of poems Khooni Vaisakhi, written by Sardar Nanak Singh. A message from Amb (Retd) Navdeep Singh Suri, who is Nanak Singh’s grandson and who translated the poems into English, was played. Other performances included a Kathak dance by Shiwali Varshney Tenner based on the poem “Jallianwale Bagh Mein Basant” written by Subhadra Kumari Chauhan and a poetry session with local prominent poets of Hindi, Urdu and Punjabi. Some of the narrators and poetry reciters at the May 1, 2022 Punjabi virsa event in Willowbrook, Illinois organized by the Midwest Punjabi Association with the Indian Consualate in Chicago. Photo: Asian Media USA

Bratasree Roy Biswas also performed Indian classical dance ‘Rabindra Natya Nritya’ which is a form of dance drama based on poems, songs and novels composed by the Nobel laureate Tagore from Bengal. The performance depicted how the epic author had returned his knighthood in protest of the Jallianwalan Bagh massacre in the 1919.

Dhalwal also launched his logo ‘GSD’ for his new venture.