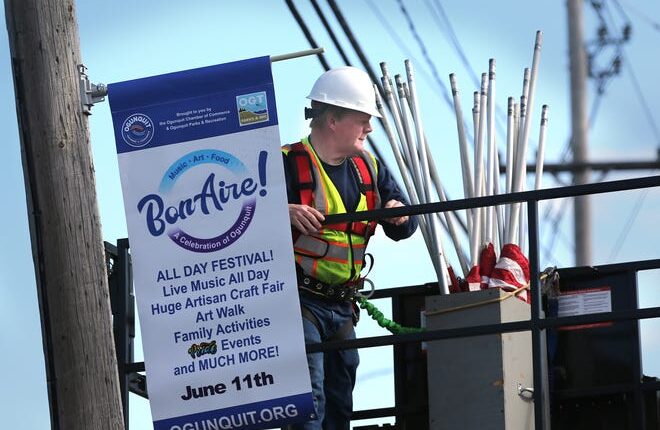 OGUNQUIT, Maine — The community is kicking off June and summer with two big celebrations: Ogunquit Pride, a five-day launch of LGBTQ+ Pride Month, and an all-day street festival marking the 40th anniversary of the town’s incorporation.

Maine Governor Janet Mills and Speaker of the House Ryan Fecteau will attend the opening ceremonies of the town’s celebration of LGBTQ+ Pride Month on Wednesday, June 1. The ceremony will start at 5:30 pm and will include a flag-raising at Veterans Park and a crosswalk commemoration on Route 1.

“It’s going to be a Pride crosswalk,” said Alice Pearce, the executive director of the Ogunquit Chamber of Commerce, which is holding the event.

A reception at Maine Street, a nightclub at 195 Main Street, will follow the opening-day ceremonies.

The festivities will continue through Sunday, June 5, according to Pearce.

The Ogunquit Playhouse will host Pride Night on Thursday, June 2, with a reception before that night’s production of “The Cher Show.” Rick Barber/ReMax Realty and the Village Food Market are sponsoring the event.

Also that evening – and on Thursday and Friday, June 3 and 4 – the Leavitt Theater at 259 Main Street will host an LBGTQ+ film festival. Doors will open at 5 pm on those evenings, with screenings scheduled to start at 6 pm

In addition to the reception on the first day, MaineStreet will host events each night, Thursday, June 2, through Sunday, June 5. Entertainment will include Jaye McBride, a trans comic; the OGTea Dance, Women’s Tea Dance, and Heel & Harness Tea Dance; and the Dueling Drag Divas.

Several local businesses will be hosting exhibits or special promotions throughout the five-day fun. TaleSpinStudio, of 119 Perkins Cove Road, is raffling off an original artwork, “Pride Lobster Tail.” All funds raised from the raffle will be donated to the Frannie Peabody Center and the Ogunquit Pride Committee. The raffle winner will be announced at the flag-raising on June 1. To purchase raffle tickets, visit online at facebook.com/OgunquitMaine/.

The AIDS quilt will be on display at Bangor Savings Bank, located at 196 Main Street, from June 1 through June 11, according to Pearce.

“Businesses throughout Ogunquit will be announcing additional promotions, events, and fundraisers throughout the month,” the Ogunquit Chamber of Commerce stated in a news release.

For the most up-to-date schedule with full details, visit the chamber’s website.

As stated, Ogunquit Pride is only half the fun in town in June. On Saturday, June 11, the town will celebrate “BonAire!,” an all-day street festival offering live music, artisan crafts, a family-friendly circus and fireworks.

“BonAire!” will be a celebration of Ogunquit’s 40th anniversary of its incorporation as a town during the summer of 1980. No need to do any quick math – the event was originally scheduled for June of 2020, the official 40-year mark, but the COVID-19 pandemic forced a postponement until this summer.

“We’ve been saying this is the 40th anniversary, three years in the making,” Pearce said.

On June 11, musicians will perform live all day long on a 40-foot stage on Shore Road. Nearby, an artisan craft fair will be held in Jacob’s Lot. As well, the Ogunquit Village School Playground on School Street will be transformed into a circus.

“BonAire! celebrates the legacy of the community – the fishing heritage, the art colony heritage, and the LGBTQ impact on the community,” Pearce said.

The Mallett Brothers Band, a nationally touring alt-country and rock band based in Maine, will headline the day’s music with their set beginning at 4:30 pm The live entertainment itself will kick off at 10 am with the Charles Greenwood Trio, followed by sets from the Stages of Ogunquit, and The Dirt Boys. The Stages of Ogunquit will feature acts from Ogunquit Playhouse, Leavitt Theatre, The Front Porch, Jonathan’s and Maine Street.

More than 50 vendors will be on hand to sell their locally made products at the craft fair, according to Pearce.

Over at the Ogunquit Village School Playground, activities that day will begin at 11 am There, families will find roving circus performers – including stilt walkers – and will enjoy story-telling, caricatures, face-painting, music and more. The Andrew Silver Circus Show will serve as the grand finale, with a show from 4 to 5 pm

The Perkins Cove section of Ogunquit will host a live lobster sale at noon. Festival-goers will be able to buy lobsters from the lobstermen and women who will have caught them that day.

Perkins Cove also will serve as the starting point for the town’s self-guided art walk, beginning at the Ogunquit Museum of American Art and winding its way up Shore Road and along Main Street.

Starting at noon, during low tide, artists of all ages will be invited to join Sebastian, a sand artist, at Main Beach, where they will learn how to make “phenomenal, large-scale drawings in the sand, worthy of your drone pictures ,” according to the chamber.

And what would an anniversary celebration be without fireworks? “BonAire!” will light the sky with them, with a show launching from main beach at 9:15 pm