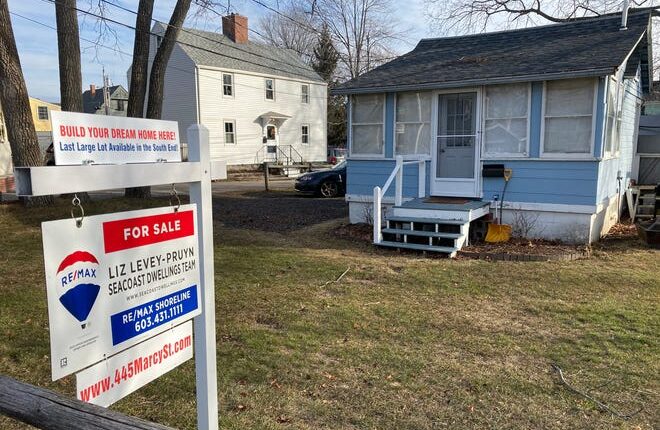 PORTSMOUTH – Long before a little blue house in the South End went on the market for $ 1.8 million, it was a memorable, delicious corner shop that locals stopped for sweet treats.

Now, after years of elusive history, even for Portsmouth’s longest-lived residents, a Michigan man is reminding the port city of his father’s famous fudge that was sold on Marcy Street.

In 1953, Ashley Jones III was in third grade when he and his parents, older brother, and older sister moved from Pennsylvania to 437 Marcy St., Portsmouth.

“My father was always an entrepreneur, you might say,” he recalled his late father, Ashley Jones Jr.

Soon after the acquisition and personalization of lot 445 Marcy St., the cottage was soon referred to as the “Lil ‘House,” where his father mainly made and sold fudge.

“People just thought it was one of the best candy they ever had,” Jones recalled of his father’s work, which later included hard candy.

Listed as the ‘last big lot’ in the South End

In 2019, the infamous Candy Cottage and its 0.34 acre lot were launched for $ 2 million. Remax Shoreline’s real estate agent Liz Levey-Pruyn said the list of properties also on Pray Street and Partridge Street has been revised in recent months and reduced to $ 1.8 million.

When Jones heard the list of his childhood reasons, he said it was “absurd in my eyes”.

A local listing states that a prospective buyer can choose to “build on the last large lot in Portsmouth’s historic and sought-after South End”.

Although currently occupied, any buyer would need to contact the Historic District Commission prior to building the property.

Levey-Pruyn, who refused to comment on this story, told Seacoastonline in 2019, “You can’t just take it down or move it.”

Jones, who attended old Haven Elementary School before graduating from Portsmouth High School in 1962, said he viewed his father’s 20-plus years of confectionery making as both a job and a hobby.

Jones Jr., who trained at a Massachusetts culinary school, made candy to sell to local businesses and sold it along the shores of Hampton Beach and North Beach, his son said.

Jones Jr. also made his fudge and distributed it to the North Church parishioners during the era of the late Rev. John Feaster, who served in the church from 1946 to 1973. Jones III’s mother Helen ran a shoe store nearby.

For the past few days, Puddle Docker has told Wayne Semprini he remembered a small candy store, but the South End was littered with similar family businesses. Sherm Pridham, a fellow Puddle Docker and former director of the Portsmouth Public Library from 1973 to 2003, couldn’t remember the name of the store but felt like he was owned by the Jones family.

I go deep into the Portsmouth records

A file request from the Portsmouth Public Library confirmed Pridham’s suspicions. Katie Czajkowski, a specialty collections librarian, searched South End and other memoirs and documentaries in Portsmouth in vain before she finally got a similar tip about the Jones family and was able to locate their history.

“Wow – what a tough nut to crack!” she wrote in an email.

Jones said he waited a year after graduating in Clipper paints before moving to Michigan to go to college in the early 1960s. After graduating, he never left.

Now in his 70s, Jones looks back on his time in Portsmouth as a time that held “a mountain of memories of life there”.

Together with Jones’ parents, his brother Joseph and his sister, also known as Helen, have since passed away. When he thinks of Portsmouth, he remembers the long walks he would take his family in the South End and fondly remembers how they all loved Moe’s sandwiches.

“That was a staple,” he laughed.

Another time the Jones family visited the Blue Fin Fish Market, which became the Sanders Mills Fish Market in the 1980s after it settled in Michigan.

Jim Sanders, owner of the market and the Sanders Lobster Company on Pray Street, is the current owner of 445 Marcy St. Through Levey-Pruyn, Sanders declined to comment on the story.

Jones and loved ones try to visit Portsmouth every few years. On his return journey, he has an obligatory stop in Marcy Street, where, a little way back from the 80-year-old candy house, he looks at a large tree that he planted in 1953 as a boy.

Even though Portsmouth is halfway across the country, it has shaped Jones’ heart, which will stand the test of time. “What a wonderful place it is,” he said.

More:What do blue crabs do in Hampton Beach? Ocean experts are intrigued.