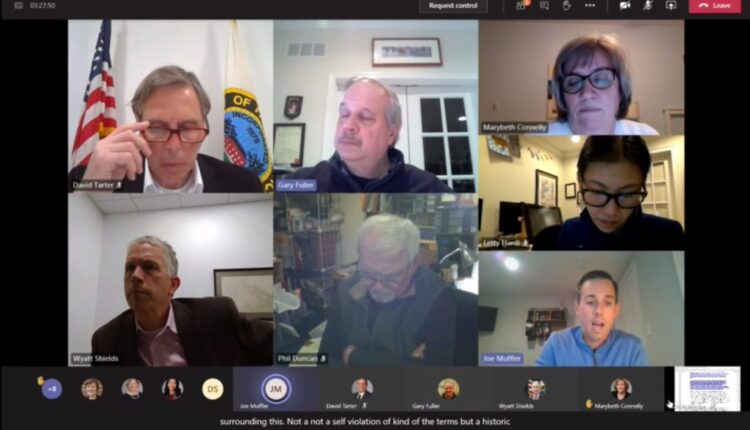 The FC city council is discussing some of the specifics of the Founders Row project with Joe Muffler (bottom right), a representative of the Mill Creek project leader

One might consider such a reaction to the City of Falls Church’s annual real estate appraisals released this week. They grew by an impressive 2.7 percent overall, slightly above the estimates the city had back in December.

City manager Wyatt Shields said in an interview with the news press on Wednesday, there were no surprises with the results released by the office of the assessor’s chief officer, Ryan Davis, and reviewer Lisa Freeman.

The slightly better-than-expected increase was part of the $ 55 million increase driven by progress in building the Founder’s Row mixed-use project at the intersection of W. Broad and N. West Streets, which is currently under construction.

“This major improvement and the spate of new builds and individual home renovations in the city are fueling growth,” Shields said.

Shields said that as the economy begins to recover from the darkest days of the Covid-19 pandemic last year, it is hoped that the breaks will resurrect in some new developments and new jobs, indoor restaurants, retail recovery and will create more new large scale development.

He said he was very hopeful, for example, that a new cinema company would eagerly join the Founder’s Row project (following the bankruptcy of the company that signed a lease last year that was announced in the fall).

All of this improves the likelihood that the property tax rate will not rise above the current rate of $ 1.335 per $ 100 appraised valuation.

With the announcement of the new annual property appraisal, it reported that all properties in the City of Falls Church were valued at $ 4,570,946,700 ($ 4.57 billion), up 2.72 percent from Jan. 1 2020 corresponds to of Falls Church Assessors Office.

The new build (valued at $ 72.68 million) accounts for 60.58 percent of the city’s appreciation and the remainder is for market appreciation.

City ratings will be sent to owners in late February.
Updated rating information will be posted on the city’s website by March 2.

Individual homeowners are expected to receive their individual assessments in the mail before the end of the month. The tax rate will be set by the FC City Council at the end of April.

The total values ​​for commercial real estate have increased by 0.57 percent since January 2020 and the values ​​for multi-family real estate by 2.78 percent. Overall, residential property values ​​rose 4.07 percent last year.

The assessment notice is an assessment of the property’s fair value; It’s not a tax bill. Property tax payments are due in two installments on December 6, 2021 and June 6, 2022; Property owners will receive invoices before this dates.

The real estate tax rate will be set on April 26th, when Falls Church City Council approves the operating budget and capital improvement program for fiscal year 2022 and sets the tax rate.

Public budget hearings will be held during regular city council meetings on March 22, April 12 and April 26 at 7:30 p.m.

Individual reviews will be sent out later this month. City Hall has advised residents that if homeowners wonder whether their valuation is correct, after scoring the valuation, would they ask, “Would my home sell at the valued value if I put it on the market?” If the answer is yes, then the rating is likely correct.

Actions by the Falls Church City Council at its Monday session:

It voted 6-1 to amend the terms negotiated with Mill Creek for the Founder’s Row project to replace a third-party escrow account for promises that a movie theater would occupy the site.
It heard a report from the city’s voluntary committee on the use of force, the results of which will be reported in the news press next week.