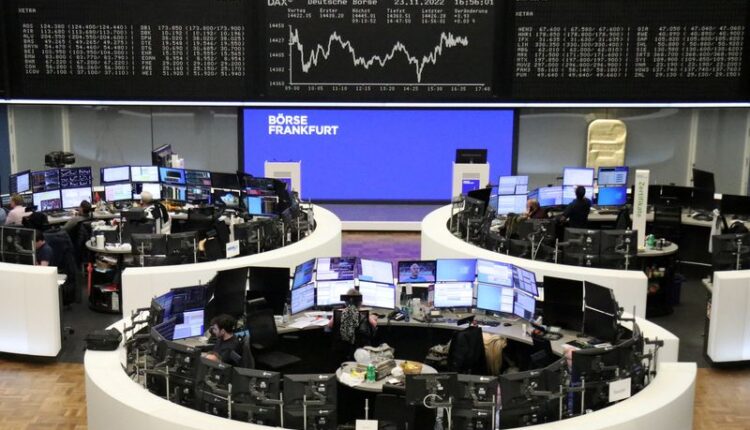 By Sruthi Shankar and Devik Jain

(Reuters) -Europe’s index closed at a fresh three-month high on Thursday led by gains in real estate stocks after minutes from the Federal Reserve’s November meeting signaled a slowdown in the pace of interest rate hikes.

The pan-European STOXX 600 index rose 0.5% to its strongest level since Aug. 18, although trading volumes were light due to a US market holiday for Thanksgiving.

Wall Street ended with solid gains on Wednesday after the US central bank’s meeting minutes showed a “substantial majority” of policymakers agreed it would “likely soon be appropriate” to slow the pace of interest rate hikes.

“It was in line with expectations around signaling smaller rate hikes, however, also underscoring that the terminal rate will be higher,” said Karim Chedid, head of investment strategy for iShares EMEA at BlackRock (NYSE:).

“What is different for the ECB is that the recession we’re expecting for Europe is going to be more protracted. It means that the ECB may not be able to go as far as the Fed and they will have to eventually start cutting rates sooner than the Fed.”

The European Central Bank’s minutes of the October meeting showed policymakers feared that inflation may be getting entrenched, justifying more rate hikes, but for how long and how much remained a debate.

Separately, ECB board member Isabel Schnabel, the most influential hawk, pushed back against recent calls from many of her colleagues for smaller interest rate increases, saying this was premature and could even prove counter-productive.

“Recent comments by ECB officials suggest that the discussion at the December meeting will be much more heated and controversial,” Carsten Brzeski, global head of macro at ING said in a note.

“We currently expect the ECB to hike rates by 50bp in December and by another 25bp in February. The big question will be around quantitative tightening (QT) or in other words, the shrinking of the ECB’s balance sheet.”

Adding to the positive mood on Thursday, a survey by the Ifo Institute showed that German business morale rose more than expected in November and pessimism heading into the coming months eased considerably.

The benchmark STOXX 600 has rallied more than 15% from its Sept. 29 closing lows as an upbeat earnings season and hopes of smaller interest rate hikes by the Fed overshadowed worries about a potential recession in Europe.

The rate-sensitive real estate sector was the top performer in Europe, up 2.5% as the German government bond yields slid. [GVD/EUR]

Everything you should know about the metaverse real estate