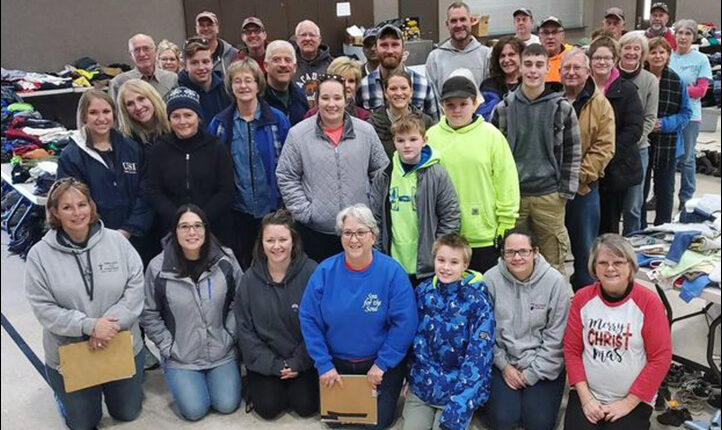 Watching the evening news after a day of cleaning houses on Friday, December 10, 2021, Merkel found herself glued to her television as reports of the unfolding disaster poured in. A large storm front in northwestern Tennessee had spawned a 190-mph EF-4 Tornado that stayed on the ground for a record 166 miles, carving a mile-wide swath of death and destruction from Obion County, Tennessee to Breckinridge County, Kentucky. Directly in its path was the small town of Bremen, Kentucky, located just 75 miles south of Huntingburg.

The scale of the devastation was almost too much to take in.

“God,” she prayed, “somebody needs to do something.”

“Well, do something,” came back the reply.

The next day, she just started making phone calls.

“I called a church down there at random,” she said.

It was St. Michael’s Catholic Church in Sebree, Kentucky. Next, she contacted the Catholic Diocese of Owensboro, which led her to Catholic Charities.

In the meantime, Merkel called St. Mary’s Catholic Church in Huntingburg, where she is a parishioner, to start the ball rolling up here.

St. Mary’s Parish wasted no time organizing a relief effort immediately, partnering with St. Joseph’s Parish in Central City, Kentucky (near Bremen), a parish in which over half the membership suffered severely in the storm. By Sunday, December 19, donated items brought to the gym in the Activity Center were ready to load into a semi-truck trailer donated by OFS for transport to Bremen.

On Monday, December 20, along with the loaded semi, the parish sent down a relief team of over 30 men with chainsaws to cut up trees and debris as well as at least 20 other folks to help clean, put up tarps, sort donations, and cook and serve meals. Lugene figures that 80 to 100 people turned out to help that first week. Since December, crews have returned six or seven times to the area to continue with home reconstruction, debris clean-up, donation management, and much more.

Other local churches joined forces with St. Mary’s as word of the relief effort spread, including Huntingburg United Methodist Church, Salem United Church of Christ (Huntingburg), and the Catholic parishes of Holy Family, Precious Blood, and St. Joseph’s in Jasper.

Allen Miller, Muhlenberg County’s disaster recovery coordinator, has had his hands more than full since that fateful December night. Not only does he oversee the ongoing recovery operations for the county of 38,000, he’s also Bremen’s mayor, which translates into concern not only for Bremen’s 350 residents but also for the 2,800 people located within Bremen’s sphere of influence.

Miller estimates that the tornado has affected 180 to 200 families in his town and the surrounding area. While most have decided to stay and rebuild, a few have opted to relocate.

For those who are staying, however, the challenges are daunting.

In general, most homes in the area are underinsured due to policies not keeping pace with the rapid rise in home repair costs over the past year.

There is a desperate need for long-term financial help to rebuild and “get back to where they were,” he says. The immediate assistance provided by FEMA and the Red Cross is no longer available.

So far, residents of Dubois County have donated over $18,000. Fundraisers held since December have included a catered dinner as well as T-shirt sales. No donated amount is too small.

“Thank you for the money,” Merkel said. “If you have given, thank you! If you have not, please consider doing so.”

Those wishing to donate may send checks to Lugene Merkel, 10901 W. St. Rd. 64, Huntingburg, IN 47542; checks payable to the Bremen Community Tornado Relief Fund. Merkel takes all checks in person down to Bremen about once a month, where Miller then deposits the funds through the Muhlenberg County tornado relief office. She has also sent them by certified mail.

“It’s overwhelming,” Miller said about help extended through Merkel’s efforts. “Thank you to the parish and the community.”

Miller keeps a dry erase board on a wall in his office to keep track of all the work teams coming each week. And there is still plenty to be done: Debris clean-up and disposal, home construction and repair (roofing, plumbing, electrical work, etc.), and management and oversight of donated items awaiting distribution from a local warehouse are just a few of the tasks at hand. All it takes is a phone call to Miller to match volunteer skill sets with jobs to be done. He can be reached at 270-543-6576.

Gas cards are available to help volunteers with the cost of gas; please call Merkel at 812-309-3316, and she will get a card to anyone who needs it.

Although homes are being rebuilt gradually, Miller reports that peoples’ yards are a different story. Despite having a roof back over their heads, residents still go out the front door to what amounts to a landscape without trees, grass, shrubs, or anything living. As a result, landscapers are in high demand.

Bremen has applied for grant funding, including from the Red Cross and United Way, to repair the storm-damaged community center. Miller hopes to retrofit the rebuilt center with a community storm shelter with multiple doors but no windows.

Little did Merkel realize six months ago that she would not be cleaning houses so much as rebuilding them and in doing so, rebuilding people’s lives. Little did she dream that she would be plunged into the non-profit universe overnight. She’s had to learn the ropes quickly about everything from graphic design to email distribution lists, from non-profit legalities to organizing work teams and arranging truck transportation.

It’s been quite the learning curve.

“I am not equipped to do this at all, but He equipped me,” Merkel said. “I’m a housekeeper.”

Medical Bills Can Shatter Lives. North Carolina May Act to ‘De-Weaponize’ That Debt.