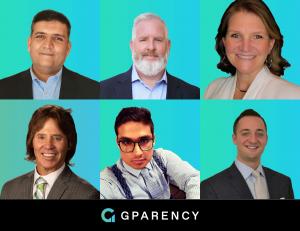 I am honored to welcome Abrar, Joel, Christina, and Brian to GPARENCY. Building out the C-suite was specific to the areas we are investing deeply in, revenue, technology, and operations. ”

The growth is attributed to a swell of adoption rates by commercial real estate investors and general partners, who migrated to the platform, which allows for a set low price to close a deal, versus the legacy model, where mortgage brokers earn the same large percentage to close a $1M deal, as they would for a $100M transaction for the same amount of work, banking relations and papering. Also contributing to GPARENCY’s success is the rising interest rate environment, as commercial real estate investors sought to capture as much information and upside on their deals as possible.

“I am honored and delighted to welcome Abrar, Joel, Christina, and Brian to GPARENCY. Building out the C-suite with these talented luminaries, was specific to the areas we are investing deeply in, revenue, technology, and operations. This is in direct response to the meteoric growth we’ve seen since our impetus, as well as the scale-up we are implementing to meet the migratory demand of commercial real estate investors and general partners, wanting a more efficient, transparent, and ultimately profitable deal-flow experience,” said Ira Zlotowitz, CEO and founder of GPARENCY.

“We are also building out our senior executive bench, and are excited to announce Chetan and Josh, joining the GPARENCY team and its movement within the commercial real estate sector,” added Mr. Zlotowitz. “These six executives were chosen from a highly competitive search, not only because they are best-in-class, but also because of their collective experience in nascent business models. GPARENCY is shifting the commercial real estate experience, in the same way, Uber disrupted cabs, Amazon disrupted shopping and delivery, and Netflix disrupted content consumption.

This team is poised for the growth ahead and also prepared to build out GPARENCY laterally, as we continue to build our fertile ecosystem of content, proprietary data, banking partnerships, and much more for our valued investors, general partners, and banking alliances.”
###

About GPARENCY
GPARENCY is creating equitable access to opportunities for commercial real estate owners everywhere. GPARENCY gives its members a concierge who acts as their acquisition rep providing GPs with updated and confirmed listings and capital markets intel. This enables GPs to go direct with an unlimited number of commercial mortgages—debt and equity—without paying anyone another nickel.

At GPARENCY you will pay a max of $16,000 to close any size commercial mortgage and that includes the membership for one year. Membership includes all the benefits of our concierge program including access to listings and banking intel nationwide through the initial dedicated concierges in the program.


A Presswire’s priority is source transparency. We do not allow opaque clients, and our editors try to be careful about weeding out false and misleading content. As a user, if you see something we have missed, please do bring it to our attention. Your help is welcome. A Presswire, Everyone’s Internet News Presswire™, tries to define some of the boundaries that are reasonable in today’s world. Please see our Editorial Guidelines for more information.