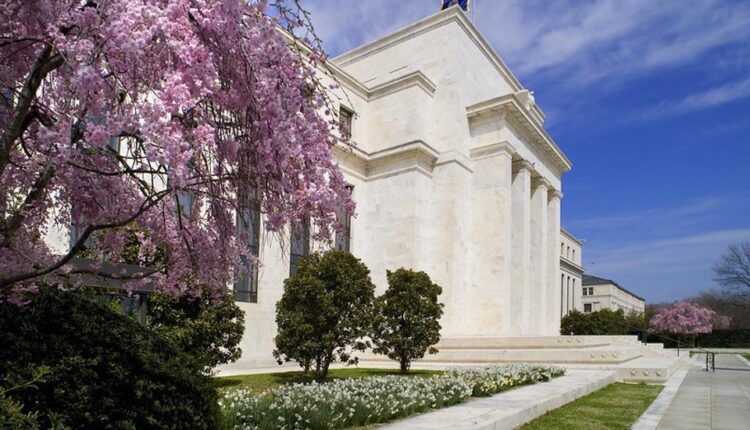 The Fed, Interest Rates, and the Good News for Commercial Real Estate

The Federal Reserve has kept interest rates low to support the economic recovery.

The Federal Open Market Committee left interest rates unchanged at its April 27-28 meeting and reiterated its commitment to keeping interest rates low until the economy has better recovered from the pandemic. Interest rates are at all-time lows, however, and are sure to rise higher as the economy returns to pre-pandemic activity. Some observers expressed concern about the impact of higher interest rates on commercial and residential property markets. However, most of the evidence suggests that the interest rate environment will continue to be favorable for real estate.

The same forces apply to commercial real estate, as real estate is often financed with commercial mortgages. As a result, commercial property markets are often viewed as one of the sectors of the economy hardest hit by interest rates. However, the current risks are not great compared to previous periods, as the debt burden in many real estate sectors is more moderate than in the past.

The two biggest drivers of the outlook for long-term interest rates (which have the most direct impact on commercial property markets) are economic growth and the likelihood that such growth will drive inflation higher. Economic activity is expected to recover in the spring and summer as the introduction of vaccines slows the spread of COVID-19 and allows businesses and consumers to return to normal before the pandemic. Many economists expect the economy to grow at an annual rate of 6% or faster later this year. To the extent that faster growth creates higher inflation, it also leads to higher business activity and demand for commercial space, higher rental rates, higher commercial property returns, and higher property valuations. These higher profits generally offset the burden of rising interest rates during times when growth is accelerating.

Indeed, inflation should rise if growth accelerates. Concerns about inflation risks first emerged when Congress debated the $ 1.9 trillion stimulus package in February. Former Treasury Secretary Lawrence Summers warned that the scale of this stimulus could push the economy beyond its potential and fuel inflationary pressures.

Financial markets have responded to this stronger growth environment, and long-term interest rates have already risen. The yield on the 10-year Treasury note rose from just over 1% at the end of January to 1.75% at the end of March.

We are in a world of low inflation, low returns, and low interest rates.

This is not “That Seventies Show” or even “Sixties Show” when it comes to inflation risk. There is by no means consensus that the imminent pick-up in growth will push inflation too high; In fact, many economists (including myself) expect inflation to remain moderate. There are cyclical, structural and political reasons why the inflation outlook is favorable:

Inflation will rise in the next 12 months due to base effects. This is because comparisons between price changes and last year will look back on the early months of the pandemic, when prices were temporarily depressed by unusual weaknesses during the shutdowns. This will artificially boost the reported inflation rate after 12 months, but this higher reported inflation rate is not the start of an inflationary spiral.

More important to the medium-term outlook, the overheating of the 1960s and 1970s was due to years when the economy was pushed beyond potential GDP – the economy’s “speed limit”. Joseph Gagnon of the Peterson Institute for International Economics pointed out that the fiscal boom from spending on the Vietnam War lasted for many years, while much of the current fiscal stimulus is a temporary response to the current economic crisis. As these components of the stimulus wane over the coming years, inflationary pressures will also ease. 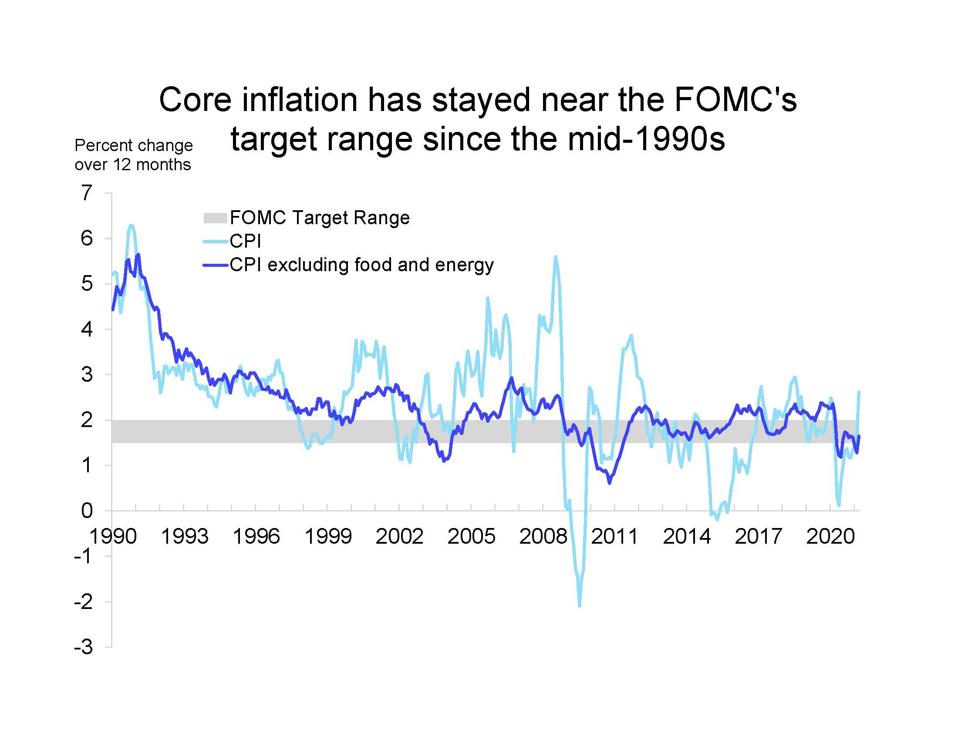 During the great inflation of the 1960s and 1970s, the economy was heavily dependent on manufacturing and energy-intensive companies. These types of production processes have been more susceptible to bottlenecks that result in price pressures, including energy costs, than today’s information economy. In fact, for software developers, for example, the concept of “capacity” is poorly defined compared to automated assembly lines. In addition, economic activity in those days was much more regulated, which limited its ability to respond to congestion in order to prevent price changes. Finally, the role of price expectations and the inclusion of cost of living clauses in many labor and trade contracts helped maintain inflationary pressures in the 1960s and 1970s in ways that are not widespread today.

The Fed is already discussing how it wants to react as a commercial enterprise. This is in sharp contrast to the 1960s and 1970s, when the Fed waited for inflation rates to have risen significantly before starting to hike rates. As my grandmother used to say, one stitch saves nine in time.

Commercial real estate with a pandemic without the imbalances of the past decades.

Commercial real estate markets have historically experienced three types of imbalance: overbuilding, overheating and over-indebtedness. Fortunately, none of these three factors were a major risk on a national basis when the pandemic hit. This more stable base for the sector has helped commercial real estate resilience during the crisis and provides conditions more conducive to the recovery ahead.

New construction was moderate before the pandemic, especially in the office and retail property markets. According to CoStar, the completion of office buildings in the twelve months before the pandemic only made up 0.7% of the existing stock and was thus well below the 1.5% at the beginning of the financial crisis in 2008 or the 2.5% new offer in the year 2001 Dot.com recession. The construction of new retail properties was almost non-existent with 0.4% of the existing properties. Vacancy rates are rising and rents have been weak or down due to lower demand for commercial space, but the impact is still less than that of a heavy construction pipeline. The low supply will be important for the recovery ahead.

In addition, prices didn’t have much speculative foam. Capitalization rates are consistently low, but interest rates are also low. The spread between cap rates and Treasury returns – the rate of return investors get to compensate for holding real estate – remains comfortably wide. This will help protect commercial property prices from moderate rate hikes.

After all, pre-pandemic debt burdens didn’t seem excessive. There have been arrears and corporate defaults with cash flows fading during downtime, but there have also been surprises at how resilient many property owners have been to these stresses. A more cautious approach to debt underwriting after the 2008-2009 financial crisis helped avoid repeating some of the mistakes of the past. 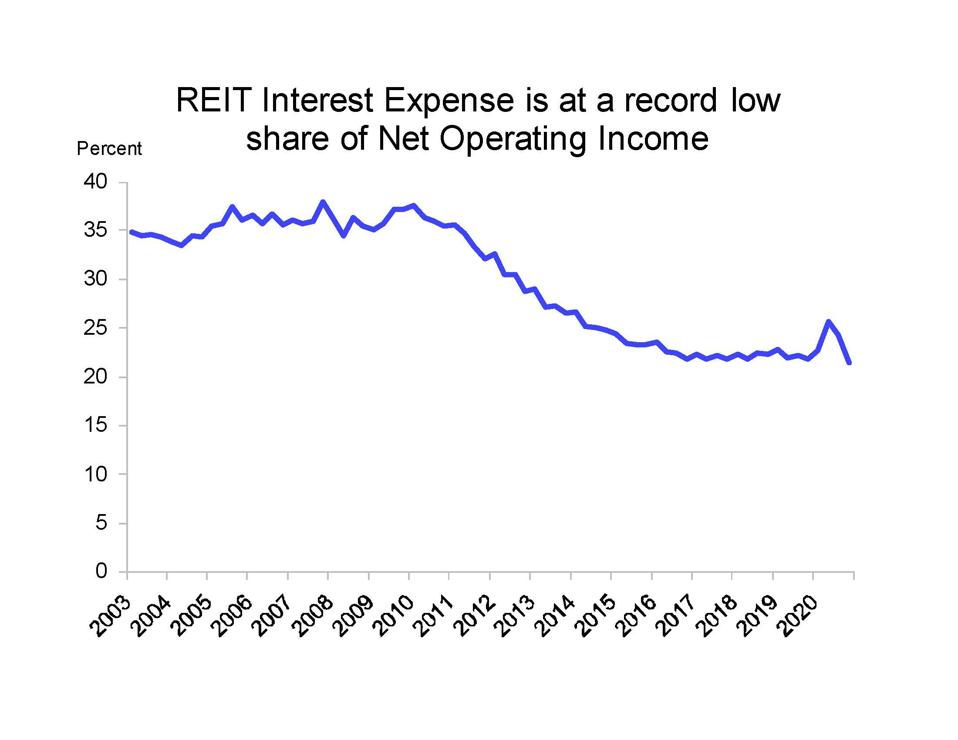 REITs offer an insight into an important part of the commercial real estate universe. As publicly traded companies, REITs have a degree of transparency about financial terms that private real estate investors lack. The REIT balance sheets are robust as they have reduced their leverage from 58.2% in 2008 to less than 50% over the past decade (full disclosure: I’m the chief economist at Nareit and created and maintained the T-trackers -Database). Together with low interest rates, this has resulted in interest payments with a record low percentage of net operating income (NOI). REITs and much of the rest of the commercial real estate sector are well prepared for moderate rate hikes.

admin 45 mins ago
Marketing for Agents