This week’s mortgage interest rate news is provided by Matt Freije, branch manager and vice president of mortgage lending with Guaranteed Rate Mortgage. Many may recognize the name as Freije was as an All-SEC basketball player for Vanderbilt and was the school’s all-time leading scorer when he graduated in 2004.

The only points Matt is concerned with these days are the basis points that the Federal Reserve is charging to lend money. Freije says interest rates for fixed 30-year mortgages are resting just above 5% and have stabilized.

Further, he predicts mortgage rates will remain stable at that level for some time, a development he says is healthy for the real estate market.

The most recent increase by the Federal Reserve had already been incorporated into mortgage interest rates, he says, and the fact that the Fed only raised interest rates by 75 basis points rather than a full point was well-received.

One monster sale did not happen last week but was announced a couple of months ago when Corcoran Reverie acquired Nashville’s Worth Properties, a firm founded in 2004 by Janet Jones and the late Mary Sue Dietrich.

Since its inception, Worth established a reputation for representing upper-end properties and buyers with expansive wallets. The name alone conjured images of Palm Beach’s Worth Avenue, the home of retail shopping for some of the world’s most affluent characters while they spend the winter season in the Florida community.

Not to be outdone, Neal Clayton led his eponymous firm into a merger with Engel & Völkers Luxury Real Estate, a German-based firm, in 2019.

In the meantime, Parks and Village merged in 2019 and then acquired the venerable Pilkerton Realtors in January of this year. Jim Terrell had taken over the reins and reign of Pilkerton following the death of jimmy Pilkerton whose father Fred Pilkerton had founded the firm. Terrell had managed the Williamson County Pilkerton office for years.

All the national firms – Redfin, Compass, etc. – have established offices in Nashville, and there are scads of new local startups in the area.

For what its worth, Corcoran Reverie’s move into the Nashville market was unexpected but understandable as broker-owner Hilary Farnum-Fasth noted that “Nashville and 30A have had an affinity for one another for years.” Their Florida offices, he added, have an in-house developer with an extensive knowledge of the Emerald Coast. It seems half of Nashville owns real estate along 30A.

Worth founder Janet Jones noted she is “thrilled to move Worth to the next level of real estate.” Jones notes she is excited to be working with her new real estate partners in New York, Californian and Florida.

Both firms, now united as one, noted this announcement coincided with the new firm’s notice that Corcoran is the new official real estate brokerage for the Tennessee Titans.

Sale of the week 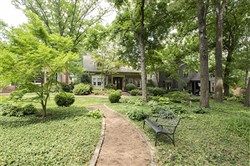 Last week, Mandy Wachtler’s listing at 133 Postwood Place closed for $1,076 million after going under contract shortly after she listed the property for $999,999.

Wachtler is a fixture at Pilkerton Realtors, one of the firms that Park recently absorbed. Once known as the “Queen of Teardowns,” Wachtler has represented scores of properties in the upper-end, many with the late Rogan Allen, who with Wachtler constructed homes that gave shelter to many of the city’s luminaries.

Shane McAnally, John Prine, Kellie Pickler and others have inhabited Rogan Allen houses, and Wachtler was with him every step of the way for years.

On her Postwood listing, she noted the screened porch was constructed by the Porch Company and that there is a sneaky garden on the grounds. She noted the house is painted with low VOC (volatile organic compounds).

Robert Diehl of Village, another firm that merged with Parks, delivered the buyer and outbid the competition, which is still the practice with well-priced, desirable properties, regardless of the Fed’s fiddling with the interest rates.

With 2,926 square feet, the house sold for $368 per square foot. It has three bedrooms, two full bathrooms and two half bathrooms.