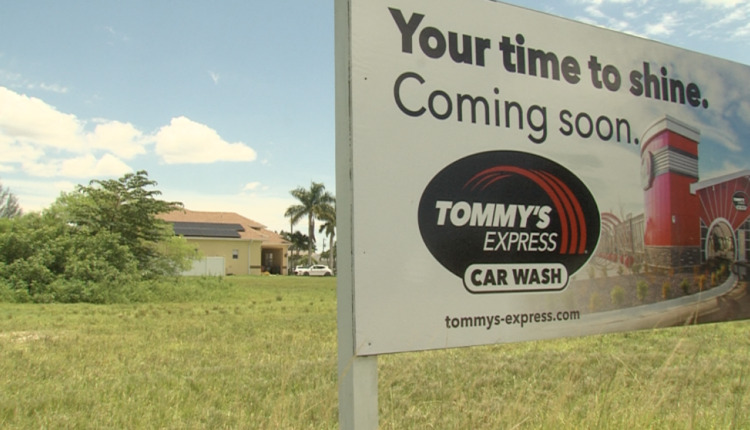 CAPE CORAL, Fla. — Residents who live off Kamal Parkway aren’t happy that the Mast Canal, which is located behind their homes, could become home to a new Tommy’s Express Car Wash. But that car wash might not become a reality if the US Army Corps of Engineers denies the property owner a federal permit.

Victoria Yereance is a twenty-year resident of the Cape who lives along the canal, and much like her neighbors – she isn’t happy about the proposed car wash.

“This channel is a live channel. It feeds many different species. Why is this the only canal that Tommy needs to build on?” asks Yereance. “This is not the place for a car wash with garbage disposals or cans that are going to get out here and get into this environment.”

Yereance and her neighbors were among several neighbors who filled out letters to the US Army Corps of Engineers to express concerns like harm to wildlife, noise, and light pollution.

After submitting those letters, which were due back in June, the Army Corps sent back a letter from Tommy’s Car Wash – which says that it intends to use reclaimed water and that their proposed car wash doesn’t pose any threat to wildlife like manatees.

The canal is located in District 4, which is represented by Councilwoman Jennifer Nelson. She put out an op-ed last week addressing residents’ concerns with the canal.

The original owner, a Remax real estate office, then sold the property to Tommy’s.

“Because that zoning was changed twenty-one years ago to commercial, they’re again within their legal right because they meet all of the land use and zoning requirements that that type of business requires by law,” says Nelson.

But for Yereance and her neighbors, that answer isn’t enough.

“Do we need more car washes in the Cape?” she asks, “I don’t think so. And especially not one on a Gulf access canal that feeds to the Gulf of Mexico.”

The Army Corps tells Fox 4 that they don’t know how long their permitting assessment process will take, but they do have the right to reject the car wash if it doesn’t meet federal requirements.