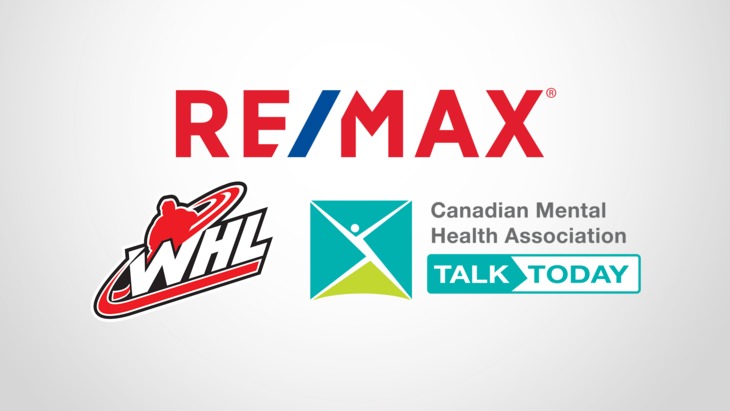 Calgary, Alta. – The Western Hockey League announced today that, by teaming with the RE/MAX network and Canadian Mental Health Association (CMHA) branches, over $19,000 has been raised through RE/MAX Presents: WHL Talk Today Game Nights during February and March in Western Canada.

The 2021-22 season marked the first annual game night effort between the WHL, the RE/MAX network and local CMHA branches. Both the RE/MAX network and CMHA have worked with the WHL and its 17 member clubs in Western Canada. The goal of the RE/MAX Presents: WHL Talk Today Game Nights was to breakdown the stigma surrounding mental health and help fans learn about resources available in their community. Although awareness was the focus of the campaign, $19,046.60 was raised for local CMHA branches across the 17 Canadian Clubs.

“The importance of raising awareness and raising funds to support mental health cannot be overstated,” said Christopher Alexander, President of RE/MAX Canada. “Thank you to all fans, teams, and our RE/MAX affiliates for taking part in these themed game nights and raising an incredible amount of funds for mental health in Western Canada!”

“As we come together across the country to celebrate Mental Health Week, I’d like to thank the RE/MAX network and the Western Hockey League for their support of mental health throughout the year,” said CMHA Saskatchewan Executive Director, Phyllis O’ Connor. “We are humbled by the generosity and support received from teams, fans, the RE/MAX network and the league as we continue to break down stigma and raise awareness for mental health.”

“Together with the RE/MAX network and the Canadian Mental Health Association, the WHL is pleased to play a role in breaking down the stigma surrounding mental health,” commented WHL Commissioner Ron Robison. “The RE/MAX Presents: WHL Talk Today Game Nights program gave us a platform to generate awareness around the importance of good mental health. It also afforded us an opportunity to generate financial support for the vital work CMHA branches continue to do in Western Canada.”

The WHL and the RE/MAX network came together to support local CMHA branches during the 2020-21 WHL season to build awareness around mental health through a digital campaign titled Goals for Mental Health. Between Goals for Mental Health and RE/MAX Presents: WHL Talk Today Game Nights, $40,000 has been raised for local CMHA branches across Western Canada.

May 2-8, 2022, is the CMHA’s annual Mental Health Week. Mental Health Week is a social change campaign to shift attitudes and perceptions about mental health. The theme for 2022 is the importance of empathy. Visit www.mentalhealthweek.ca for more info and tools or connect on social media using the hashtags #GetReal and #MentalHealthWeek.

If you or someone you know is struggling with their mental health, you can find more information at cmha.ca/find-help/.

About the RE/MAX Network

As one of the leading global real estate franchisors, RE/MAX, LLC is a subsidiary of RE/MAX Holdings (NYSE: RMAX) with more than 140,000 agents in over 8,600 offices across more than 110 countries and territories. Nobody in the world sells more real estate than RE/MAX, as measured by residential transaction sides. RE/MAX was founded in 1973 by Dave and Gail Liniger, with an innovative, entrepreneurial culture affording its agents and franchisees the flexibility to operate their businesses with great independence. RE/MAX agents have lived, worked and served in their local communities for decades, raising millions of dollars every year for Children’s Miracle Network Hospitals® and other charities. To learn more about RE/MAX, to search home listings or find an agent in your community, please visit remax.ca. For the latest news from RE/MAX Canada, please visit blog.remax.ca.

About the Canadian Mental Health Association in Saskatchewan
The Canadian Mental Health Association (Saskatchewan Division) Inc., is a volunteer-based organization which works in partnership with communities and CMHA National to support and promote the rights of persons with mental illness to maximize their full potential; and promote and enhance the mental health and well-being of all members of the community. For more information, please visit sk.cmha.ca.

About the Western Hockey League
Regarded as the world’s finest development league for junior hockey players, the Western Hockey League (WHL) head office is based in Calgary, Alberta. The WHL consists of 22 member clubs with 17 located in Western Canada and five in the US Pacific Northwest. A member of the Canadian Hockey League, the WHL has been a leading supplier of talent for the National Hockey League for over 50 years. The WHL is also the leading provider of hockey scholarships with over 375 graduates each year receiving WHL Scholarships to pursue a post-secondary education of their choice. Each season, WHL players also form the nucleus of Canada’s National Junior Hockey Team.

Top US Cities to Invest in Real Estate for 2022