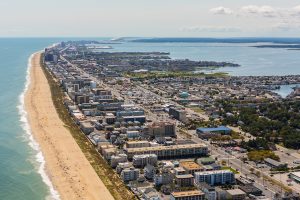 OCEAN CITY – While property values ​​for Ocean City rose slightly when the results of the latest revaluations were released last week, the resort lagged far behind the rest of the state in terms of profits on the residential side and saw a slight decline in the commercial Page.

The State Department of Assessment and Taxation (SDAT) announced last week the results of the triennial revaluation of residential and commercial real estate values ​​in Maryland. The news was particularly good nationwide. Each year, about a third of residential and commercial properties across the state are revalued and re-valued, which are used to determine property tax amounts.

This year, all residential properties in Ocean City were re-rated using the rotating geographic formula that divides Worcester County into three relatively equal parts, while commercial properties were re-rated approximately north of 25th Street. Due to the huge volume of commercial real estate in Ocean City, the south end is being split up and placed in a different revaluation group to keep the process relatively the same.

Nationwide, the values ​​of residential real estate rose by an average of 7.5%. In Ocean City, revalued residential values ​​rose a modest 3%. In Wicomico, the value of newly rated residential properties was nearly 12%, or well above the national average. Only Washington County in western Maryland saw an average increase this year than Worcester.

In Worcester, after six years of decline, scores in the various areas assessed increased for seven consecutive years. While the combined percentage of the increase in Ocean City this year was a modest 2%, the numbers are still trending in the right direction, according to Amy Smith, SDAT director for Worcester County.

“Positive is always good and we’ve been leaning in that direction for a few years,” she said. “Overall, the increases across the country were slightly less than the 2019 increases, but 2020 was a different year.”

Smith said some properties in the newly rated Ocean City areas performed better than others, and SDAT statistics released last week reflect the averages. However, Worcester County had the lowest percentage of properties that grew in value.

For example, Ocean City homes re-rated this year had values ​​up about 40%. Nationwide, the values ​​rose by 86%, and 98% in Wicomico. Smith said it was uncertain why Ocean City was falling short of state averages on the residential side.

“This year there are around 31,000 taxable accounts in the region that have been revalued,” she said. “The market was strong there, but according to national data, it may not be as strong as in other areas. Because Ocean City is a resort, there are many variables, especially when it comes to a pandemic. “

“I really can’t find any reason for the decline on the commercial side in this area,” she said. “There are certain assumptions we can make, especially on the commercial side of the pandemic. For much of the year there were travel restrictions, more and more people shop online instead of stationary, more and more people work from home instead of the office, and so on. “

Overall, Smith said she was happy with the gains on the residential side and not overly concerned about the slight decline on the commercial side.

“The bottom line is that this area has increased overall, which is a good sign,” she said. “There was a combined increase of around 2%. We have worked hard this year to make sure everything is ready and the notices go out on time. “