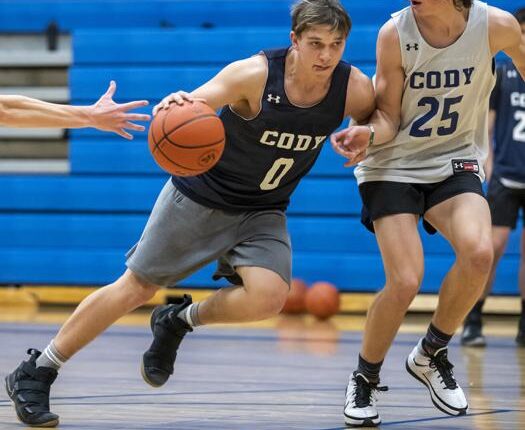 The Cody Broncs spent the opening weekend of the basketball season in Gillette, playing against some tough opponents outside of the state in the Remax basketball tournament. Both games were canceled.

The shots just wouldn’t go off at the season opener on Friday for the Broncs as they lost to the St. Thomas More Cavaliers in Gillette (61-28).

The South Dakota-based Cavaliers came out hot and stayed that way throughout the game. They hit 3 to 3 against the Broncs Zone defense.

On the offensive, Cody fought for points in the first half. They did better in the third frame, racking up 11 points in the last six minutes and getting solid posts from their bank.

In the second game of the Gillette tournament, the Broncs faced another hot shooting out-of-state team in the Scottsbluff (Neb.) Bearcats and fell 38: 55.

The Broncs kept things tight during the first quarter, but the Bearcats took a penalty run to end the first half and hit four three pointers in a row in the last two minutes to give them a 30-21 advantage at break You would never lose.

Scottsbluff stepped on the gas in the second half, allowing only five points in the third quarter while scoring another 12 points. The Bearcats offensive continued to shoot, scooping up the points in the fourth quarter to go to victory.

The Broncs open their season 2-0 and will try to put the ship back in order when the Powell Panthers (2-0) come to town on Thursday. Tipoff is at 7pm