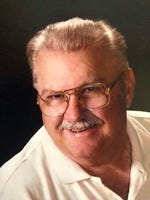 Donald Mac Willson of Chatham, Michigan, left this earth to be with Our Lord with his family on the morning of January 4, 2022 at Schneck Medical Center in Seymour, Indiana. He was 77 years old.

Don entered this life on September 19, 1944 in Central Lake, Michigan. He was one of nine children to the loving parents of Clifton and Phyllis (MacDonald) Willson. Don was a pre-eminent soccer and baseball player for the Red Devils of East Jordan High School and would often talk lovingly about those days playing sports with his best friends in his hometown.

On January 9, 1965, he was married to Margaret Elaine (Smith) Willson. That union was blessed with three children, Robin, Sue, and Donnie, of whom Don was very proud and grateful.

Don served his community as a police officer in Gaylord, Michigan before embarking on a career in sales, where he worked as a salesman and manager for the Shrader Tire Company and then Best One Tire, living and working in both Michigan’s Upper Peninsula and Brownstown , Indiana. Don and Marge later became the owners and operators of Rumely Grocery in Rumely, Michigan, where Don enjoyed mingling with the locals and tourists of this beautiful part of the country. And through that year, Don was selling Michigan real estate after working for ReMax in Munising and most recently Northern Michigan Land Brokers in Marquette.

Don was a devoted husband, loving father, and grandfather. He enjoyed making friends wherever he was. He loved playing golf, hunting (especially with his son and grandchildren), spending time at camp, having breakfast with the crew at the snack bar, listening to Christian music, visiting his family and being with Marge to attend his grandchildren’s sporting events. He also liked to tell his grandchildren that they need an average of more than 10.3 yards per carry to break “Grandpa’s Record”. In fact, he has remained loyal to the Detroit Lions over the years!

He will remember his 57-year-old wife Margaret, children Robin Wheeler, and her husband Russ from Brownstown, Indiana. Sue Popp and her husband Rick from Florence, Wisconsin, Donnie Willson and his wife Patty from Munising, Michigan, and five grandchildren: Sam and Isaiah Popp and Erin, Symon and Sophia Willson, who loved hanging out with their grandfather.

A funeral will be held at the Mortensen Funeral Home in Central Lake, Michigan on Monday, January 10, with a tour at 10:00 AM and the ceremony at 11:00 AM.

Don is buried in Densmore Cemetery in Pleasant Valley, Michigan, with a small family ceremony after the funeral.

Sincere thanks to everyone for the pouring out of love, condolences, and prayers for Don and the family. We are very blessed to have Don in our lives.

Instead of flowers, the family asks, on Don’s behalf, to consider making a donation to Munising Baptist Church (https://www.munisingbaptistchurch.com/).

The arrangements were made by the Central Lake Chapel of Mortensen Funeral Homes. Please register yourself in his online guest book www.mortensenfuneralhomes.com.