With the publication of the results of the Malaysian Real Estate Investment Trust (M-REITs) for the fourth quarter, we can now assess the impact of Covid-19 on commercial real estate assets in terms of valuation, as all REITs typically conduct their valuation respective investment property annually.

Judging from the testimonials of publicly traded M-REITs, the segment hardest hit appears to be the retail segment, as it not only saw the greatest success in terms of lower real estate revenues, but at the same time assets were knocked down due to depreciation to lower valuation.

However, not all M-REITs experienced this scenario as some assets were well insulated as their valuation remained unchanged or changed little.

For example, Pavilion REIT’s Pavilion Tower and Intermark Mall ratings remained intact, although three other assets were reduced in some form, notably Da Men Mall, which fell 21.2% in ratings. 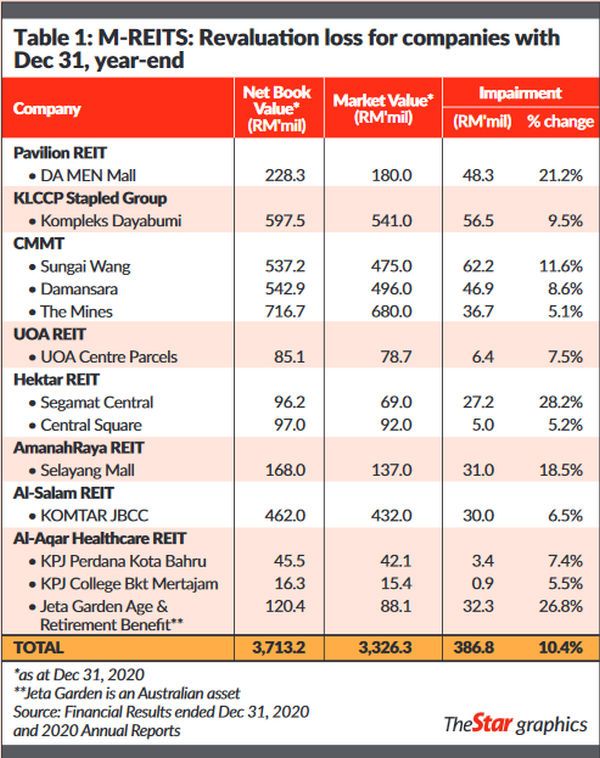 For the KLCC Stapled Group, their assets were also very intact with minor changes in valuation, however they recorded an impairment charge of RM 81.4 million for an investment property under construction related to the Phase 3 of Kompleks Dayabumi.

In addition, the valuation of Kompleks Dayabumi itself was reduced by RM 56.5 million or 9.5%. Suria KLCC saw the largest decrease of all assets in M-REITs in absolute terms as this estimated asset was reduced by RM 72 million to RM 5.565 billion.

Expressed as a percentage, however, the change in value is almost negligible, since it only accounts for around 1.3% of the total value. Another major asset that remained intact for the fiscal year ended December 31, 2020 was IGB REIT’s two major assets – the Mid Valley Megamall and The Gardens Mall. Neither of them had any changes in valuation at the end of the financial year.

Apart from the main assets mentioned above, Table 1 essentially summarizes the valuation perspective of the assets of other M-REITs that have undergone a significant adjustment. The main adjustment is defined here as the valuation of individual properties for which the change in value is more than 5% of the net book value as of December 31, 2020.

Industrial real estate appears to have performed well during the economic downturn, however, as not only was their performance largely unaffected by Covid-19, but the valuation of their investment properties also improved in 2020.

This includes the revaluation gain of Axis REIT and Atrium REIT of RM 19 million and RM 2.9 million, respectively. Both resulted in a gain of around 0.6% on the total valuation of their respective investment properties.

In addition, some isolated properties also saw their valuation rise, including UOA REIT’s corporate tower, which was valued by around RM 16.3 million, or 2.3%. Al-Salam REITs had two properties, @Mart Kempas and MCHM College, both in Johor Bahru, whose respective valuations rose by 12.7% and 6.1%, or RM 3.8 million and RM 4 million, respectively. 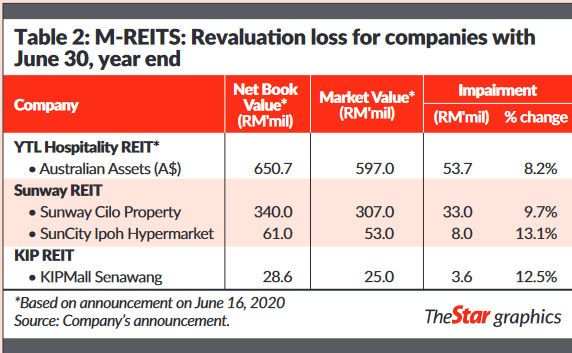 For companies with year-end in June last year, several REITs were previously affected by their respective investment properties. This is summarized in Table 2.

Similarly, some of the assets were revalued for Sunway REITs, led by a profit of RM 56 million, or 1.5% for the Sunway Pyramid Mall and RM 10 million, or 1.8% for Sunway University and the College campus. YTL Hospitality REIT

Investment property will decline in value

Real estate investments are always viewed as a safe haven and over time the value of these hard assets will increase given the factor of inflation, scarcity value and the rise in rental prices that determine capital values. After all, most of the assets held by M-REITs are geared towards the retail segment, which tends to appreciate significantly over time.

The 2020 economic downturn due to the global pandemic has changed the landscape of the real estate market to some extent, particularly in relation to commercial real estate. Some of these changes may be permanent as the new normal is now normal and therefore consumer behavior has changed as well.

How this will affect the future valuation of real estate will only be known in good time, as no one is sure whether tenants’ rental demand can be sustained or whether it will grow or continuously weaken.

Right now we’re seeing some early signs of weakness in commercial real estate, but not necessarily across the board, as industrial real estate seems to stand out pretty well while others, even in the office, retail, or hospitality segment, are resilient enough to withstand economic headwinds.

Pankaj C Kumar is a longtime investment analyst. The views expressed here are his own.