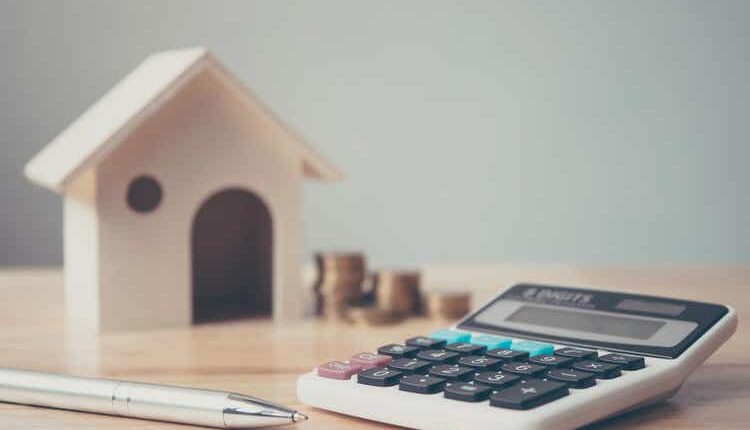 GRBK is currently facing pressure from macroeconomic headwinds, with the housing sector apparently heading into a recession. We believe that with the rising interest rates (mortgages becoming expensive) the housing sector will suffer a lot in the coming months. The firm has already started suffering, as shown in its financials. As of now, GRBK is 22.14% down YTD.

As you can see below, Green Brick Partners (NYSE:GRBK) has been outperforming the market. The graph shows the historic returns comparison of GRBK and XHB, the series Trust SPDR Homebuilders ETF. 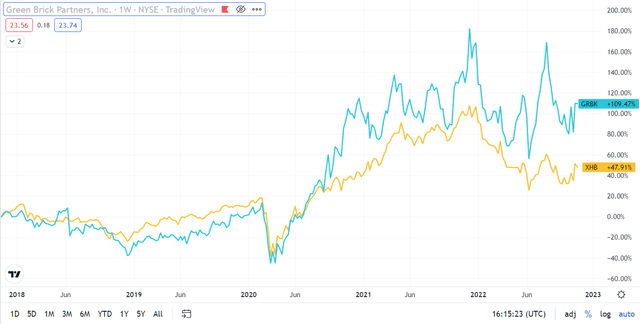 We believe GRBK has the potential to grow and outperform its peers in the long run. However, for asset allocation reasons, we would wait for the current economic cycle to hit rock bottom before entering this sector with a position in GRBK and face PE expansion when the interest rates decrease, and the housing market starts to recover.

We believe that the real estate market has supply constraint in Dallas and Atlanta where the firm has a strong presence, and we assume some competitive advantages as well.

The company enjoys outstanding governance and has substantial institutional ownership with Greenlight Capital holding 37.02% and Blackrock holding 12.63%. David Einhorn, founder, and president of Greenlight Capital is one of the most famous Wall Street value investors. He is GRBK’s cofounder and chairman, and besides the 37.02% shares ownership through Green Light Capital company, he personally holds 0.84% ​​of its shares. Green Brick made almost 5X from 2020 even being down almost 30% year to date.

Even though institutional holding contributes to better corporate governance, having such large institutional ownership can also affect the stock’s liquidity. In the case of this company, the general public just holds 3% of the stock.

GRBK’s management have shown real promise in previous years. From 2017 to 2021 the firm’s revenue grew by 288% while basic EPS increased from $0.3 to $3.75. GRBK has also had a consistent share buyback program having repurchased $102.5m worth of stock in the trailing 12 months. The analysts’ EPS forecast for 2022 is $6. 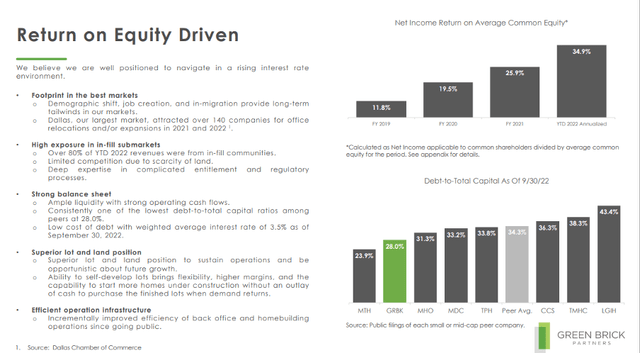 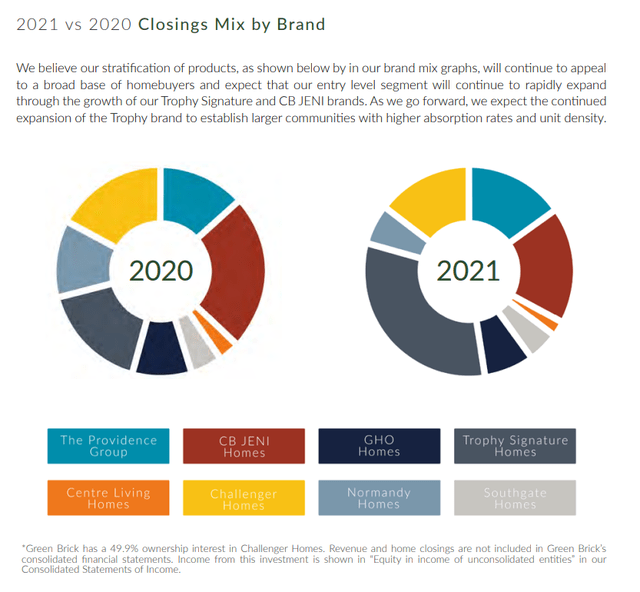 One of the most-affected segments by the current macro environment would be the Trophy Signatures brand, which has been continuously growing and already represents 36.2% and 31.7% of the home-closing revenue and volume, respectively.

This brand targets the most affordable housing demand and holds a higher proportion of lots in the C locations. It primarily serves the DFW market and in early 2022 GRBK announced that the division will debut in the Austin market where 383 acres of land were bought. Construction is expected to commence by early 2023.

Since trophy is targeting the lower-income class of the market it holds the majority of C locations of the firm. In the current outlook of the real estate market, we expect Trophy to be affected the most, and this has started to show its effect. According to the CEO, the cancellation rate of this segment (about 30%) is the highest in the firm while the overall cancellation rate of GRBK is 17.6%. From the earnings call, we also know that buyers are putting in a very small amount of earnest money at Trophy compared to other brands of GRBK.

Since there is not much buyer demand at the moment for the brand and cancellation rates are sky-high it will be extremely hard for Trophy to grow unless GRBK gets a hit on its margins by giving more incentives. 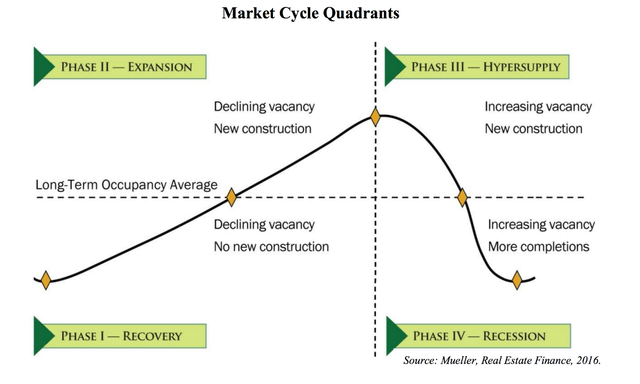 Understanding the different phases of real estate cycles is critical when it comes to approaching this company. Hyper-supply occurs when investors and developers get into a frenzy while ensuring supply meets the demand of the expansion cycle. Inevitably at one point supply begins to exceed the demand either from too much inventory or because of a pullback in demand due to a sudden shift in the economy.

We believe we are currently getting into the hyper-supply part of the cycle. As the inventory has increased by 76% since 2020. Although the management is saying that the markets where they operate are at historically low inventory levels, the demand side has seen a pullback as the fed’s tightening monetary policy and mortgage rates rise to their highest levels in 20 years.

Housing affordability has decreased and the house affordability index from realtor.com discloses a worse affordability rate against the national average in two of the major markets where the firm operates. New home orders have been falling in the real estate sector and the company suffered a decrease in new home orders of 41% YOY. These rate hikes have impacted the consumers adversely and their affordability has taken a hit which can be seen in the cancellation rates being faced by GRBK which rose by 54% from last quarter and by 155% since the same period last year, landing at 17.6% now. The effect of these can be seen from a decrease in absorption rate of 34% which is now at 5.3, a perfect indicator of the market condition.

Recession is where we believe we are currently enrouted to. This market condition is characterized by supply exceeding demand by a wide margin. Vacancy rates start to increase, and discounts on rental rates and property prices start to roll in. Absorption rates shrink even more.

As an investor, one can find opportunities in this market because properties are at a deep discount, and this is something that the company is hoping to find as they clearly said that they would weigh in on these opportunities with the firm’s buyback program.

The recovery phase is where we would like to enter this sector. Predicting recovery is tricky as the market is still facing headwinds from a recession. Rental rates can be sluggish, along with very few constructions. Timing is key in this, and if we successfully predict it, we can see rapid growth as the market moves toward the expansion phase.

This phase is characterized by improving economic conditions, increasing job growth, and rising demand for new houses, so the overall market will be on the upswing. This is the period where we expect to see multiple expansion.

GRBK posted a quarterly performance with earnings beat on the top and bottom lines. 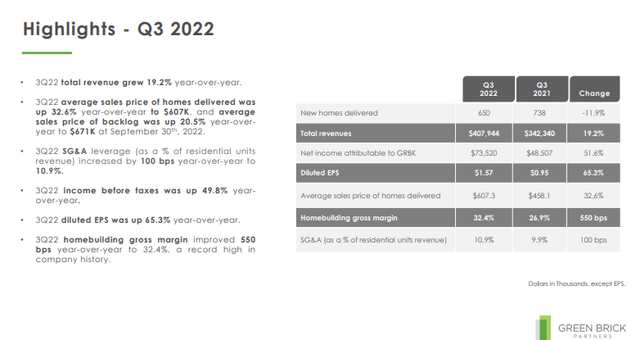 Compared to the last quarter, revenue and EPS were down 22% and 24% respectively. Gross home building margins were up 550bps YoY to a record high of 32.4% which was mainly due to the increase in average sale prices of 32.6% and the low-cost basis of its inventory. This margin was the best among its competitors and 230bps higher than the second-highest gross margin posted among the peer group.

As explained in the earnings call by the management these record margin levels are not likely to be maintained, lower sales volume and higher cancellations will remain to be the biggest contributor to their margin’s performance, but we believe they would still outperform the peer group and maintain healthy margins as they did historically. GRBK has shown to be very efficient in their operations and that has translated into their industry leading margins.

The graph below highlights their margins over the years. 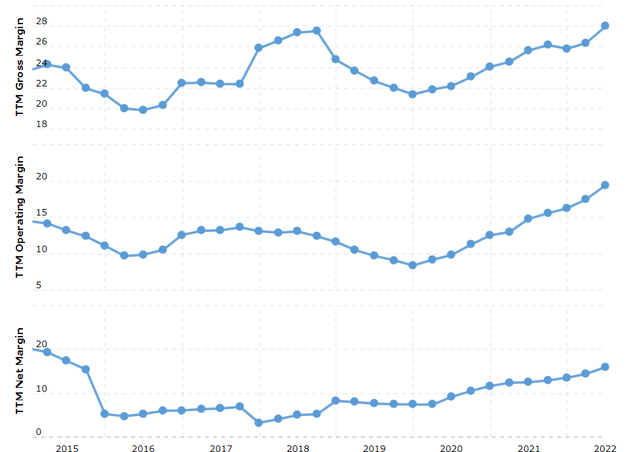 Management has really shown their expertise in predicting the macro environment as in this expensive debt environment, they have a very good debt structure with a debt to capital ratio of 28%. Their 89% of the debt is long term with a fixed cost of 3.5%.

Under the current market situation, the inventory increases of 6% this quarter and 24% since the same quarter last year is something we are not comfortable with. Previous increases in inventory were justified. For instance, in 2021, the inventory increased by 45.7% and the sales by 44%. However, with the ongoing slowness in demand for new homes and decreasing revenues, these inventory levels could pose a problem for the company.

Green Brick Partners expects to experience a 45% decrease in the Land and Lots development spending in 2023 as compared to the full year 2022. The backlog has decreased to $564m (45% down YoY), highlighting lower new home orders and higher cancellation rates .

We don’t expect any buybacks in the coming year. Management has also hinted that investment opportunities will come with the slowing real estate market, and they will might be weighing the benefit of that Investment with share buybacks.

We really like the equity story. The management of Green Brick Partners has shown its ability to operate very efficiently and outperform the market. Nevertheless, we expect the forward macro-outlook to be worsen since the inflation is showing to be rather sticky and this current economic downturn will be more extended, and the FED terminal rates will be higher than expected. These persistently high rates will not allow multiple expansion anytime soon.

When inflation starts falling to the FED’s target rate of 2%, the market will start to see cuts in interest rates.

The market will start to experience better interest rates when the inflation levels are closer to the FED’s target of 2%. Then the affordability index will improve, and we would see a breath of fresh air in the housing sector. The general economy will start to ameliorate, job growth will be stronger, and the public will start to regain confidence in the economy. At that time, there will be an increased demand for space and housing, occupancy rates will start to increase, and we will see an increase in the construction industry.

There is when we expect the earnings of this sector to increase, and on top of that, when the market smells growth, we will see our anticipated multiples expansion too. When we see the multiple expansion as often seen in the bull cycles of this sector, then this company could be a multi-bagger investment. In terms of PE company is valued at a P/E of 3.72. Conservatively if PE goes to even 11 – 12 with earning around $3.5 per share, which is less than consensus estimations of $4.21 for 2024, the stock could be worth up to $40.

When we decide to get exposure to this sector, GRBK will be our first choice. However, as explained, we have a reasonable basis to expect the housing sector to go down. Even though GRBK has been delivering industry-leading performance, it would be better to wait for the housing cycle to start recovering and then cash in on the PE expansion. 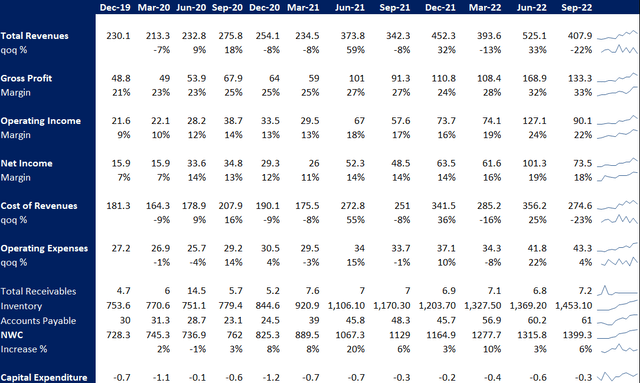 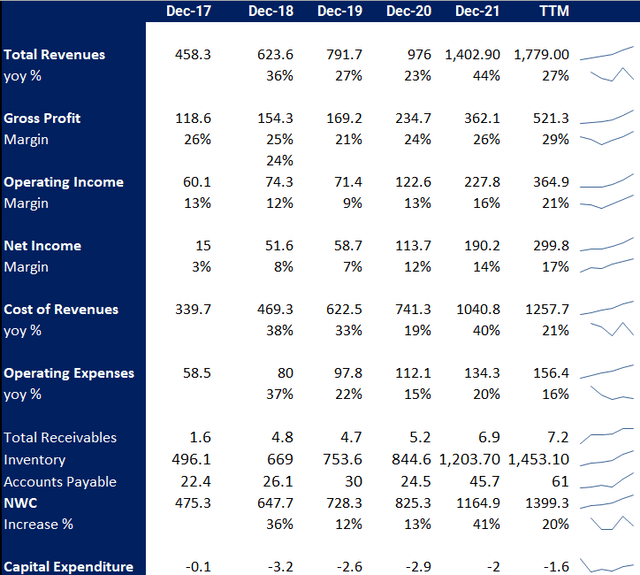 Inside the Beltway: The toilet factor and Biden’s poll numbers