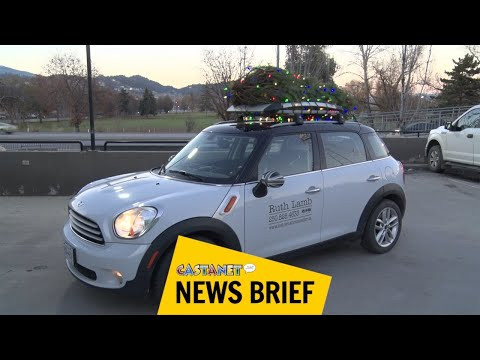 Honk or wave for something

A Kelowna resident wants some vacation fun from a safe distance.

Ruth Lamb will be driving around town on her Mini Cooper with her fully decorated Christmas tree, and this year she’s doing it for a good cause.

“Mostly because of COVID and I noticed that people are a little worse than usual … I decided to turn it into a fundraiser for the food bank and the Kelowna Gospel Mission.”

Lamm donates a dollar for every horn, wave, or thumbs up she received this holiday season.

Since a realtor Lamm spends more time in her car than at home, for the past four years she has decorated her car to spread happiness. She remembers the last year helping a dad and toddler get through a traffic jam.

“There must have been a death on the interstate so we were set back on the way to Lake Country, on the interstate, and also to Glenmore, and it took three to four hours, weeks later I had this father come up to me and he says’ you are that person! You saved my day!'”

She said it felt special that the father went out of his way to thank her.

“He told me about his daughter and he was in the car for three hours and she’s about three years old. They played the game ‘Let’s find the tree’ and they just followed my lights through the winding traffic.”

“There are a lot of people who want to give and want to make a difference, but they don’t know how – so this is socially distant, you can honk your horn and be far away,” she laughs.

“I want thousands if possible. I would love if I was so tempted to park my car because it is going to be crazy and I can no longer afford it. “