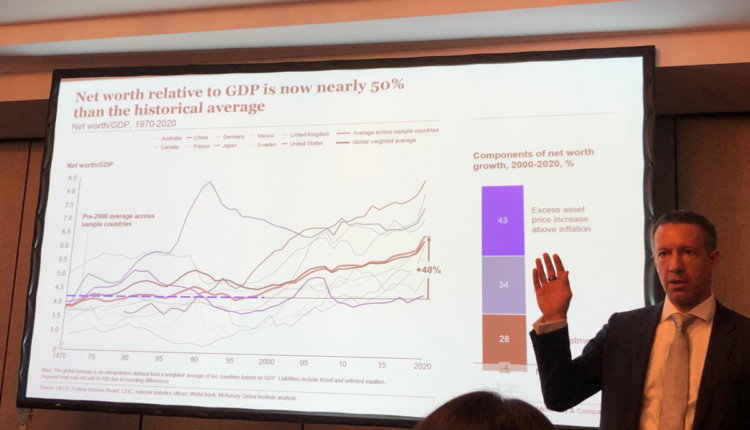 A comprehensive report by the McKinsey Global Institute, which was presented on November 24th with the OMFIF in Frankfurt, warns the new German government in good time against promoting productive instead of speculative investments.

The report highlights imbalances caused by huge global liquidity flows in real estate and outlines the urgent need for global policies to influence market mechanisms and channel global savings into investments in support of sustainable economies.

The study does not stop drawing concrete conclusions. But it supports the thesis that massive purchases of government bonds by central banks through quantitative easing have practically self-sustained inflows into real estate – which make up an estimated two-thirds of world wealth. This goes a long way towards widening global wealth inequalities.

The report coincides with the announcement of the most important political proposals of the future Berlin government under the new Federal Chancellor Olaf Scholz. The 52,000-word coalition agreement signed by the partners of the future tripartite government of Scholz is full of ambitious plans in the areas of digitization, sustainability, climate protection and social housing. These are all key issues that MGI underlined in the Frankfurt OMFIF presentation.

In succession to Angela Merkel as Federal Chancellor, Scholz promised on November 24th “the greatest industrial modernization in Germany in more than 100 years” paired with pioneering commitment to climate protection.

The ambitious coalition agreement mentions digitization 227 times, climate 198 times and sustainability 100 times. There are 72 references to “moderation” and “future”, 118 to “social” and 61 to “housing”. “Europe” appears 259 times and shows the strong ideological orientation of the so-called traffic light coalition towards integration into the European Union.

In addition to the Chancellery, Scholz’s Social Democratic Party (SPD) is expected to have six ministries in the new line-up next month. As a result of complex but ultimately successful negotiations after the unsuccessful election on September 26, the Greens won five ministries and the liberal FDP four. The two group chairmen of the Greens, Annalena Baerbock and Robert Habeck, are given the Foreign Ministry and a new Ministry for Economic Affairs and Climate Protection. The FDP leader Christian Lindner is expected to be finance minister. The ministries for the interior, defense, building, health and labor go to the SPD.

The new government recognizes the need to heal social fractures and is committed to reducing imbalances that have opened up in Germany and Europe. The MGI report sheds light on wealth disparities after the global balance sheet tripled in the first two decades of this century. Assets relative to income are now nearly 50% above the long-term average, while financial assets and liabilities grew faster than GDP and far exceeded net investment.

The study analyzes 10 countries that account for around 60% of global GDP – Australia, Canada, China, France, Germany, Japan, Mexico, Sweden, the UK and the US. He points out that the historical link between net wealth growth and GDP growth has now been broken. ‘While economic growth has been subdued in advanced economies over the past two decades, balance sheets and net wealth have tripled. This divergence arose when asset prices rose – but not as a result of 21st century trends such as the increasing digitization of the economy. ‘

Among the main results of the study, the study shows that – reflecting rising property valuations – China leads the world rankings of net wealth as multiples of GDP with 8.2, followed by France with 7.7, Japan with 7.2 and Australia with 6 ,8th . Germany is relatively far down the list at 6 in sixth place, while Great Britain and the USA are in the bottom of 10 with 4.8 and 4.3, respectively

MGI says, ‘In an economy that is increasingly driven by intangible assets such as software and other intellectual property, many savings struggle to find investments that will provide investors with sufficient economic returns and lasting value. Those savings found their way instead into real estate, which accounted for two-thirds of net worth in 2020. Other property, plant and equipment that can fuel economic growth only accounted for about 20% of the total. ‘ The study suggests that this is a serious resource allocation mistake that will require government action given the growing need to address social problems and climate change.

David Marsh is the chairman of OMFIF.