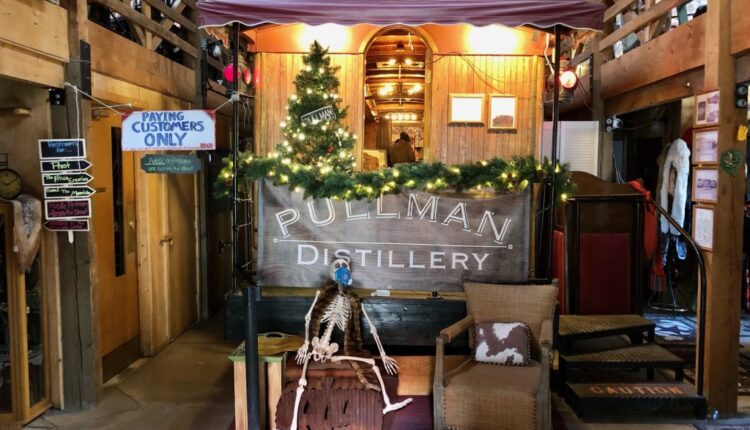 Scott Pohlman, owner of Ein Prosit, opens the Pullman Distillery as his next step in years of brewing.
Photo by Taylor Sienkiewicz / [email protected]

A Prosit owner Scott Pohlman’s long thought-out idea for a distillery revolving around an antique wagon is under construction.

The new location, the Pullman Distillery, is in the back of the same building as Ein Prosit and combines spirits with beer. In the middle there is a train carriage from 1881, which offers seating and retail outlets. The distillation room is on one side of the car and a barrel room on the other.

The car traveled from Summit County to Denver in the 1880s through about 1914. The name of the distillery refers to the Pullman Co., which manufactured sleeper cars. Pohlman said he and his team have been restoring the carriage over the past few months with new wallpaper and lights that give it an antique 19th-century feel.

Different types of spirits are made at the distillery, including gin, agave brandy, and whiskey. The Pullman Distillery will also bottle bourbon and rye whiskey. In addition to a few seats outside the car, there will be space for around eight to ten people in the train carriage. There is also the possibility for groups to hold events with a bartender in the barrel room.

The idea for the distillery has been in the works for years, said Pohlman, who said he was the first brewer in the backcountry brewery.

“I just wanted to do that. … I was a brewer for a long time and this is the next step, ”said Pohlman. “We had an idea what would be good in this room, and we wanted a distillery to go well with this Old West theme.”

In the 1990s, the car was where ReMax is and then moved to its current location in the back of the Ein Prosit and Frisco Emporium building around 2009. The wagons leading to the track are visible through a pane of glass in the floor with the rest of the tracks under floorboards. Pohlman explained that the tracks that can be seen through the glass used to go through where the building is currently, to Galena Street Alley, where the Denver train would turn.

Pohlman added that there is an antique photo of the car on the back label of the liquor bottles.

The designer Nichole Steuart developed branding and labeling concepts for the Pullman Distillery in order to combine the antique Old West feeling with the modern cocktail experience. Steuart was involved in the project when he was working at Ein Prosit and overhearing Pohlman talk about the idea. Steuart has a background in branding and graphic design. When the concept became a reality, she prepared a design proposal that was selected.

“Because of the car, I saw what his initial concept ideas were,” said Steuart. “I went home and kept thinking about what a good label would look like … what would catch the eye, what would stick to this Old West theme, but kind of modern. I kept coming back to the idea of ​​a train ticket. “

Steuart imagined an old paper train ticket and researched authentic train tickets from New York to California. She took the ticket pictures she found and created her own as a concept for the label.

In addition to the train tickets, Steuart was also inspired by other historical photographs and spent a lot of time looking at various historical documents and photos of Frisco.

“We wanted to tell you a story with the design and the concept, but also bring it to life today,” said Steuart.

The wagon is open to retail. The distillery is scheduled to open in April or May.