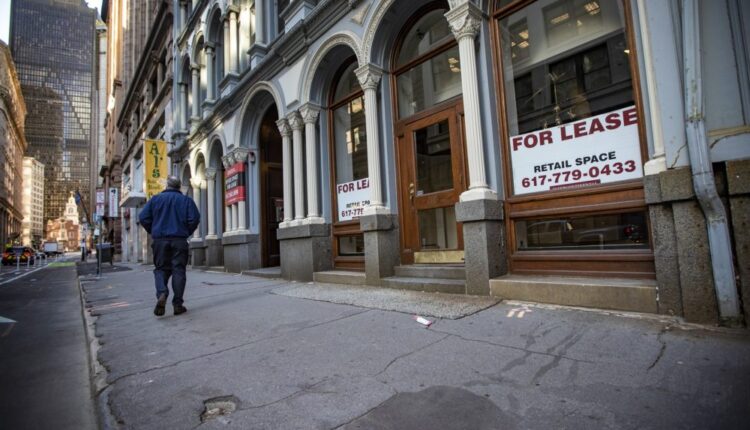 “Downtown Boston has really proven itself over the past few years,” said Liz Berthellete, a researcher with Newmark Commercial Real Estate. “And before the pandemic, we had the strongest fundamentals this market has ever seen.”

Berthelette worked in the financial district for over a decade and saw this growth for itself: companies moved in, rents rose, and in early 2020 the vacancy rate was around 7% – an almost historic low, she said.

Much has changed in just a few months. On a recent weekday afternoon, the canyons of concrete and glass office towers that once hummed with activity were eerily quiet.

A few months after the pandemic, many companies cleared their rented offices, increasing the vacancy rate in downtown Boston to a seven-year high of over 10% and across the metropolitan area to 13.5%. This emerges from a recent report by Newmark.

There are now many remaining office tenants try to sublet their space. At the end of October, office space totaling around 3.8 million square meters was available for sublet in downtown Boston, in Back Bay and in the seaport – roughly twice as much as after the great recession of 2008 and the dot-com bust at the beginning of the 2000s.

According to the experts for commercial real estate surveyed by WBUR, the daily occupancy in office buildings in the city center is only around 6 to 10%, since most of the former office residents work from home. How does that number compare to “Before Times”?

“Well, it’s harder to say because we didn’t really measure that,” Berthelette said. In “normal times” a buyer looking for office space in the city center can ask a realtor about space or equipment. These days they also want to know – does anyone show up? 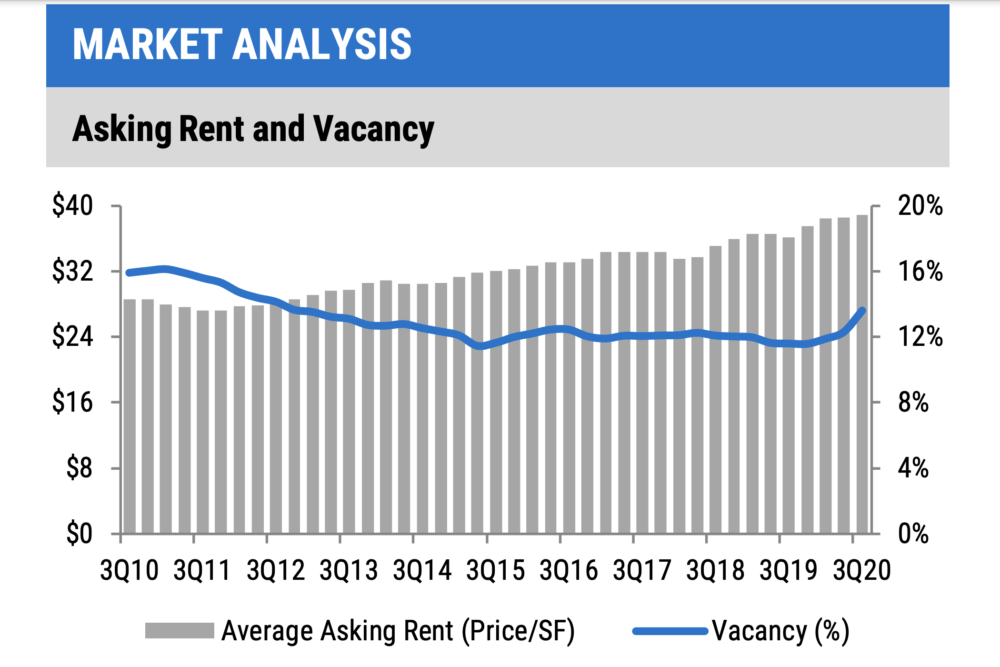 Before the pandemic, the Boston Metro office market was in great demand, rents rose and vacancies fell. (Courtesy Newmark)

This question is also asked by commercial landlords and potential tenants in the hotel, restaurant and retail industries. And as the pandemic spreads and these companies cut their revenues, some economists fear the impact could extend well beyond commercial real estate and slow any possible recovery from the recession caused by the pandemic.

About a mile and a half west of the financial district, between the high-end shops and restaurants of Newbury Street, the scene is a little livelier. Small groups of people were eating al fresco on a gusty afternoon, and shoppers came and went to stores – at least the ones that let customers in.

However, a closer look showed how badly the retail space had been hit by the pandemic. “For Lease” signs hang in the windows of dozens of empty shop windows. Many of the stores look like they have been vacated in the past few months. 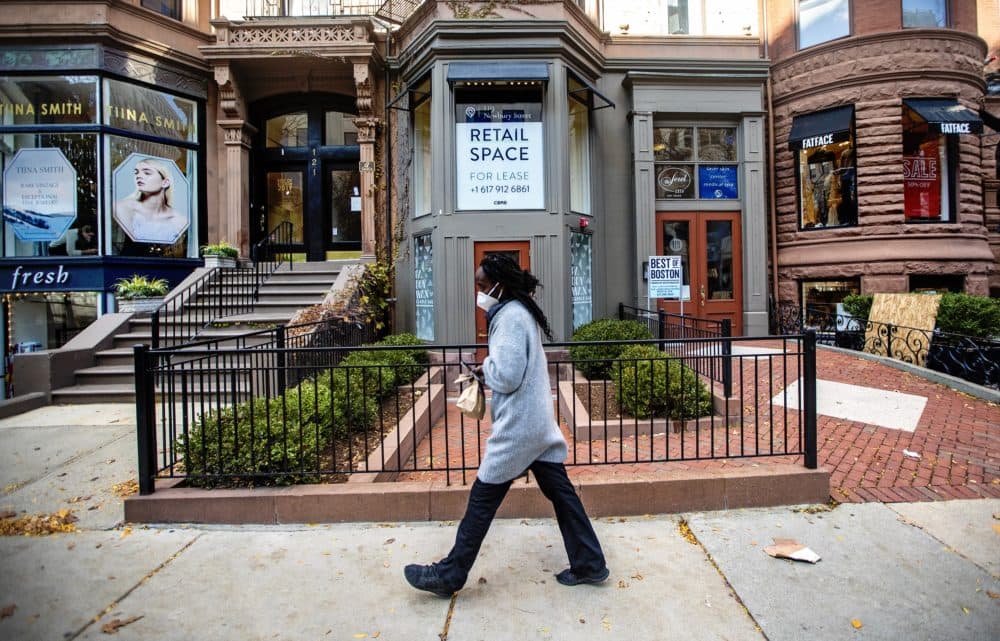 Signs advertising available retail space have become a more common sight on Newbury Street in Boston since the beginning of the pandemic. (Jesse Costa / WBUR)

“It’s not your imagination,” said Ann Ehrhart of Boston Urban Partners, a commercial real estate company that specializes in restaurant and retail space. The decline in local customers, office workers, students and tourists has taken the greatest toll on urban shopping and dining, she said.

The retail property market has been declining in recent years: lower rents, fewer deals, more vacancies. The pandemic has accelerated this trend. And since brick-and-mortar stores generate a fraction of their normal sales, many companies do not take the opportunity to set up a store.

“While there are some bright spots when people get creative to think about business,” Ehrhart said, “I’d honestly say, on the whole, it’s pretty bleak right now.”

Even if you’re not buying, selling, or leasing commercial real estate, there is a good reason to worry about what happens to that part of the economy, said Joe Peek, an economist at the Federal Reserve Bank of Boston.

As the economic boom that emerged from the CARES federal act fades, he assumes that people’s incomes will fall and more businesses will stutter.

“I think we haven’t seen the worst bankruptcies and business failures yet,” said Peek. And what happens next has ramifications for the rest of the economy.

It starts like this: companies fail, they default on their loans, and banks start to suffer losses. As banks see the market getting riskier, they become more selective about who to loan to.

According to a recent survey by the Federal Reserve’s Senior Loan Officer Opinion Survey (SLOOS), 60-80% of loan officers said they had tightened lending standards for commercial real estate projects in recent months. The last time SLOOS saw a similar credit crunch was around 2008, at the height of the Great Recession.

“Do I want to lend you a real estate contract now?” Said Peek. “Probably not. Because I fear you won’t make the payments.” 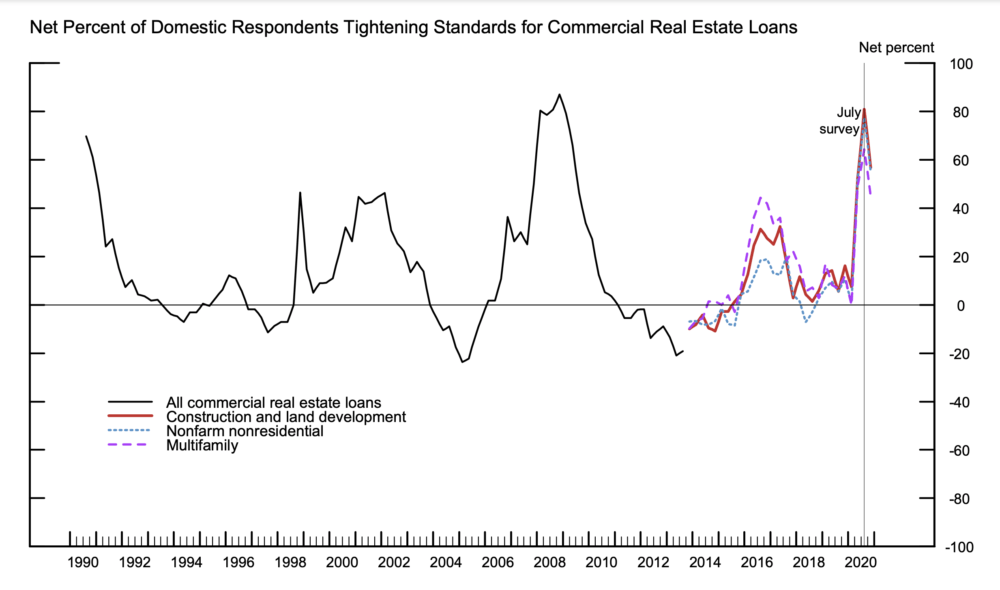 A Federal Reserve survey shows a dramatic increase in the number of senior loan officers who say they tightened their commercial real estate lending standards during the pandemic. The last time a similar spike was recorded was during the Great Recession. (Courtesy of the Federal Reserve)

The problem is that credit for a market is like oil for an engine: “It lubricates the economy,” Peek said.

Unless commercial landlords can obtain loans, they are less able to contract with tenants to help them with the pandemic. And the could lead to more business failures.

“Okay, hotels go bankrupt or retail stores go bankrupt. But that’s not where the bankruptcies end because a lot of those employees have lost their jobs. They’ll cut their expenses in all kinds of stores. And that will do this.” Businesses are struggling, “said Peek, which could lead banks to tighten lending even further.

Economists like Peek and his colleague, Boston Fed President Eric Rosengren, fear that this cycle could weigh heavily on a potential post-pandemic Restoration.

How do we get out of there?

Commercial real estate depends on people getting out of there – work, travel, shop, eat. But we can’t really do that, Peek insists, until the pandemic is under control. 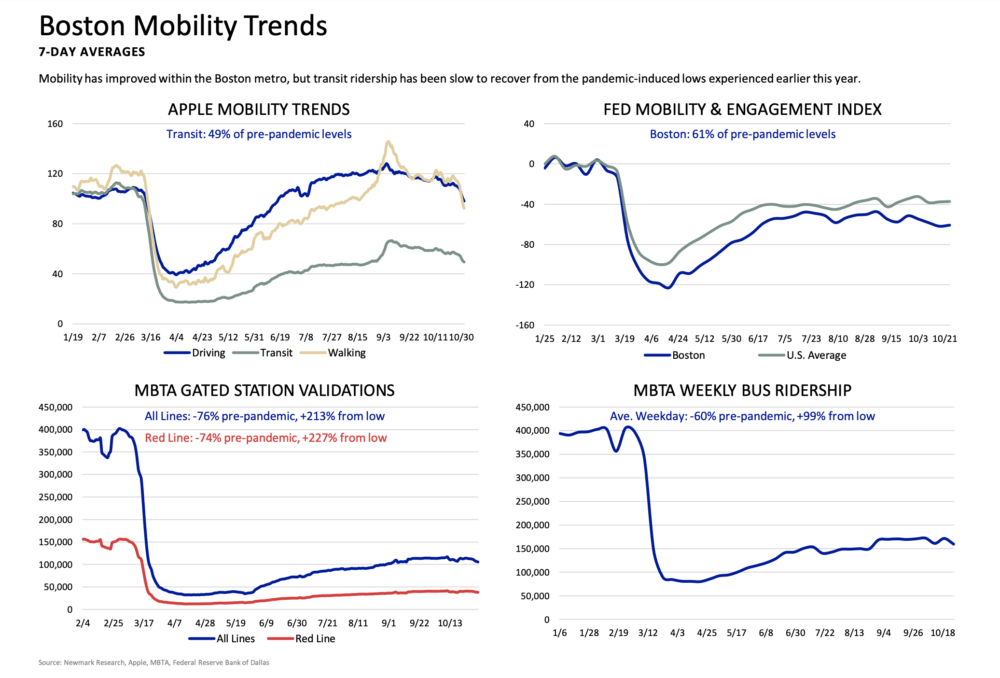 Various measures show how the pandemic has restricted the movement of Boston residents. (Courtesy Newmark)

“There are negative job offers [rates]”Said Purpura.” If there was space available, there would be three people who would want it for a space. “

Eventually, urban retail, restaurant and office space will return, Purpura said. And when hopes of a vaccine begin to crystallize, well-capitalized investors could try real estate with a pandemic discount.

“In my world … only if you think it can never come [any] It’s better if you strike and get involved, because it’ll get better, “said Purpura.